Veloce Esports’ Not The GP series – held on Formula 1’s official 2019 video game – took to the streets of Monaco for the first time, yielding wins for James Baldwin and Tom Martinez and a podium for Williams F1 driver Nicholas Latifi.

Ferrari’s Charles Leclerc was the quickest real-life F1 driver over one lap as he finished qualifying in third, beating F1 Esports driver James Doherty who, like Baldwin, was driving a Mercedes.

On the first lap of the opening 25%-distance race, Leclerc and Bolukbasi made contact at Portier, sending Bolukbasi into the barrier, while Doherty stuck to the inside and passed the both of them to make it a Mercedes 1-2. 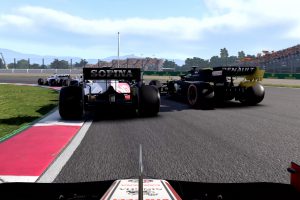 Leclerc and Bolukbasi, who raced against one another in the previous Not The GP events, came together again as Leclerc braked later than Bolukbasi for the Nouvelle Chicane and pushed his rival straight on.

Ultimately both drivers had time penalties to serve during their pitstops, especially since corner-cutting penalties in the game had been set to ‘strict’ – which meant they were given out much more frequently.

After the pitstops a Mercedes 1-2 led by Baldwin was nailed on, meaning all eyes were on the battle for third between the two Williams drivers – Latifi and F1 gaming YouTuber Tom Martinez, known as Tom97.

The two made contact on the penultimate lap as Martinez tried to overtake Latifi down the inside on the entry to the Nouvelle Chicane, but instead hit Latifi and spun him around.

He let Latifi back through. meaning the F1 driver finished on the podium and Martinez in fourth.

Bolukbasi finished in fifth, with Leclerc ending up 11th.

The second 25%-distance race took place at night and with reversed starting grids.

A spin for Pietsmiet at the Nouvelle Chicane on the opening lap meant Courtois took first, a position he held for many laps.

A number of drivers tactically pitted early in order to try and find clean air. 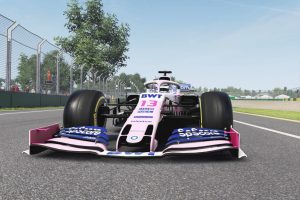 The driver who most benefited from this was Martinez, who was one of a few drivers to stop at the end of the first lap and made the most of clean air to cycle through into the lead.

He won the race by 16 seconds, aided by drivers tripping over each other behind him.

A Leclerc-Bolukbasi battle for second place unravelled with three laps to go when Bolukbasi rode the kerb on the inside of hairpin and turned Leclerc’s Ferrari around and into the barrier.

Bolukbasi thus ended the reversed-grid race in second, with YouTuber Depielo in third and Courtois in fourth – while Leclerc ended up only 12th.

A post-race penalty demoted Latifi from sixth to seventh, while Norris – who had crashed out in a chaotic late battle with Leclerc in the opener after  – once again ended his race in the barriers.