Is Vettel bringing out the best in Schumacher? - The Race
Skip to content
Formula 1

Is Vettel bringing out the best in Schumacher?

One of the most popular and uplifting narratives of the 2021 Formula 1 season has been the Sebastian Vettel-Mick Schumacher friendship, and how it’s helping the Formula 1 rookie thrive.

As a four-time world champion and one of F1’s renowned ‘good guys’, Vettel has a lot to offer an inexperienced driver like Schumacher who joined the F1 grid with more to live up to than most.

Entering F1 is a daunting enough prospect without the added burden of expectation that comes with being the son of a legend. Mick is doing so without the direct support of his seven-time world champion father Michael, who has not been seen in public since a skiing accident in the winter of 2013.

Mick has the scrutiny and expectation of his father’s name without his presence in the paddock to help him through it.

Vettel is lending some of that missing support. He has not taken Michael’s place, nor is he trying to. But he is clearly an important person in Mick’s corner. There’s a sincere warmth to their relationship, which Vettel says is “surely” different to any other he’s had in F1. 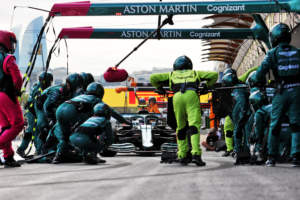 “I am friends with his father and his father is my hero,” he says. “So, there is a difference there.

“But it’s no different in terms of getting to know the guy, the person. And you like him, or you don’t.

“We get along really well, and I’m happy to help with stuff that maybe I can help with.”

Schumacher says: “Obviously, he’s a huge help for me in all ways, anything on and off the track.

“I’m happy that I can go back to somebody that has so much experience but also that is so likeable so yeah, very happy he’s around.”

The season so far is littered with examples of Vettel and Schumacher in each other’s company, checking in on one another’s result post-race, and seeking each other out for a quick congratulations.

Of greater substance is the stuff we usually don’t see in full: the advice Vettel is giving Schumacher. At the French Grand Prix, the onboard camera of Schumacher’s Haas captured such an example.

Footage emerged of Schumacher and Vettel in conversation and Vettel examining the Haas’s cockpit in parc ferme after the race at Paul Ricard. 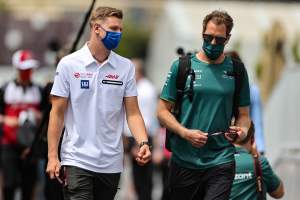 It turned out they’d previously talked about Schumacher’s slightly “crooked” driving position so he asked Vettel to take a look inside his car.

It was a sign of how close the relationship is that both would care about something so small.

“I’m always happy to offer help or advice,” says Vettel. “Sometimes the advice might not be the best! But I think these small things, stuff like with the seat, even if it’s not a big drama, all the experiences you made in your time I’m very happy to pass it on or to help and share.

“Even if it’s just for the feeling that he’s not the only one who’s suffering with the seat or other things.

Vettel was always likely to have had an influence on Schumacher’s fledgling F1 career. Michael was his idol growing up, he is a caring and invested individual who has grown close to the family, and has a strong bond with Mick.

But with Michael not around at races, Vettel has now become a slightly more important figure as a receptacle of experience and someone for Mick to lean on.

Mick’s focus, diligence and performance after Michael’s accident has commanded respect from the very first year after it happened

Schumacher’s the type to benefit from that. He has a tremendous work ethic and there’s no hint of any of the entitlement that can come from a life in which family creates all a person’s opportunities. He’s an impressive young man in many ways, something he clearly owes to his parents, his genetics, and the environment he grew up in.

His personality and skills are translating into a quietly impressive rookie F1 season. He clearly has the edge on team-mate Nikita Mazepin.

But Haas is in an awkward position as a team that conducted little development over the winter and isn’t improving its car through the season.

Still, Schumacher’s making a decent go of fighting in the lower reaches of the midfield. He’s impressing his team with his mentality. His attention to detail is high and with Vettel’s tuition that’s unlikely to change. 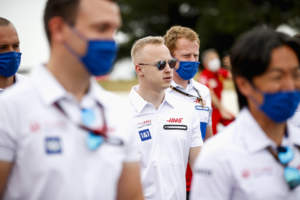 Most importantly he is hugely enjoying the experience. Right from the start of pre-season testing, Schumacher looked like a driver keen to soak in every moment of his rookie F1 season. Several times this year he’s referred to doing what he loves – and he looks and sounds like that almost every weekend, even in a back-of-the-grid car.

The fundamentals of Schumacher’s on-track skills were established a long time ago. It looks like his attitude is benefiting greatly from Vettel’s presence.

After all, Vettel is a great believer in cutting out the noise in F1, working hard and enjoying it. Vettel’s never better than when he’s happy. It’s probably not a coincidence that Schumacher, a driver leaning on Vettel for advice, is showing the same traits.

“In the driving sense it’s always difficult, every car is different, every environment is different but I think he knows what to do behind the wheel,” Vettel says when asked by The Race how he assesses what appears to be an impressive rookie season in a challenging situation for the team.

“As you said – I think it’s the right observation, it’s the feeling I get as well – he’s doing really well. 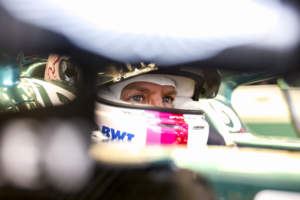 “It’s not easy to come into your first year, it’s a difficult situation for him. I think in many ways, it would be easier if he had a great car under him, to show what he can do.

“So it’s a tough test on him, but I think from the outside he’s really doing well. He seems to be lifting the whole team. He’s very motivated.

“He’s showing one side of his strength on the track, but I think off-track is probably even more impressive. He’s putting a lot of work in, and he enjoys it. That’s the secret behind it.”

That’s a very Vettel way for someone to go about their racing. Of course, anything Mick may be learning from Seb may well be a characteristic that Seb himself adopted from his childhood hero.

But that’s the purpose Vettel serves, taking what he learned in his career and allowing Schumacher to benefit. If it so happens that Vettel is imparting a lesson Michael taught him, then that’s just a nice element of serendipity.

What’s inarguable is that having a multiple world champion as such a willing supporter has almost intangible value for a young driver.

“It’s quite good from Sebastian to spend some time with Mick and being a little bit his mentor,” says Schumacher’s team boss Guenther Steiner.

“He’s a four-time world champion and it seems like they’ve got a good personal connection between each other so I think Mick will benefit from that. It’s nice to see that Sebastian being a little bit older, he takes care of the younger guys or at least tries to bring them on the right track.

“It’s very helpful because making experience takes time and if you have somebody who speeds that up that always should help you in your career.”

Of course, if things were different, that would be Michael. It’s a sad fact that for Mick’s entire car racing career, he hasn’t had the same input from his father that he should have had. Michael isn’t able to be trackside and hasn’t been since Mick’s penultimate year of karting.

Mick’s focus, diligence and performance after Michael’s accident has commanded respect from the very first year after it happened. Despite the hugely destabilising emotional impact Michael’s accident must have had on a personal level, Mick managed to finish second in the world karting championship. 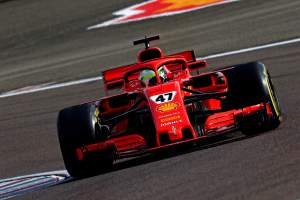 Since then, he has kept working, kept developing as a driver, and deserves his status as a Ferrari protege and an F1 driver. He’s had to do that without his father guiding him the way he did in karting.

Now he’s in F1 without it as well, but at least Vettel is filling some of the gaps in Mick’s support system.

Schumacher may well have coped without. He’s quick, level-headed, and quietly resilient. Like Vettel says: “I think he knows what to do himself.”

However, it’s always easier to get the best out of yourself with the right people around you. For Schumacher, Vettel is absolutely one of those.