Is Alpine's progress real or 'too good to be true'? - The Race
Skip to content
Formula 1

Is Alpine’s progress real or ‘too good to be true’?

Fernando Alonso believes Alpine qualifying performance for the Spanish Grand Prix means the team is now “in that mix with Ferrari and McLaren” in the battle to be Formula 1’s best-of-the-rest behind Red Bull and Mercedes.

Alonso was disappointed to qualify only 10th in Barcelona, but team-mate Esteban Ocon was fifth after lapping 0.839s off pole position.

This is the best result for an Alpine driver in qualifying in 2021 and follows Ocon’s sixth place on the grid in last weekend’s Portuguese Grand Prix.

Alpine has introduced a series of upgrades including to the floor, front wing and diffuser in recent races. 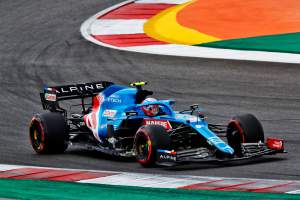 There were concerns that its form in Portugal was assisted by the track configuration. But at heavily aerodynamically-dependent Barcelona, the Alpine A521 has again proved competitive, with only Charles Leclerc’s Ferrari of its midfield rivals ahead.

While Alonso believes McLaren and Ferrari still have the edge, he is confident Alpine has now moved into the leading midfield group that it was absent from in the opening two race weekends in Bahrain and Imola.

“It’s going to be very tight, I think it will be track-specific what performance we will find every weekend,” said Alonso when asked by The Race about the step made.

“I probably tend to believe that McLaren and Ferrari are a little bit quicker – or at least in four races, they’ve been able to be more consistent on pace.

“It’s true that we made a very big step in Portugal. We didn’t know if it was track specific and it was very nice to confirm here in Barcelona that it was real. I think the Alpine is now in that mix with Ferrari and McLaren, so that’s a very positive trend.

“We are all very excited for the next couple of races, but we need to remain cautious and reconfirm because from Bahrain and Imola to Portugal and Barcelona, it seems maybe too good to be true.

“But obviously, it is true because both cars were in Q3 and Esteban was sixth in Portimao, fifth here, so we are in the mix.” 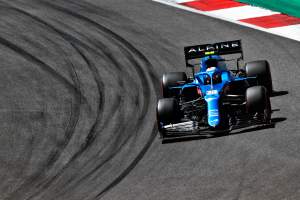 Ocon: Back to his best or flattered by Alonso?
Read more

Alonso was confident in the car but didn’t have a straightforward run in qualifying, requiring two sets of soft Pirellis to escape Q1 then aborting the flying lap on his second run in Q2 after an error in Turn 4.

His first-run time was enough to get into Q3 by 0.011s, but after he’d run used softs on the first Q3 run, his second lap was ruined by the amount of backing up at the end of the preparation lap that left him with cool tyres and no grip.

Ocon had a smoother run, although he admitted he was on course to be one of the few drivers to improve on their second Q3 run before what is understood to be a minor engine issue cost him time. But he described the performance as encouraging.

“It is the confirmation that we wanted coming here,” said Ocon when asked by The Race about the step forward.

“Here in Barcelona, everyone knows the track very well and all the teams are quick. So we kept going, we kept finding little things on the car all the way through Friday and Saturday.

“And I’m very pleased that we have the confirmation that it is working we want and we have the pace to be in the top five.

“[To be in the fight for best of the rest behind Mercedes and Red Bull] is a big statement obviously but that’s the aim. Barcelona was our worst weekend last year, I qualified P15, but I qualified P5 [this year] so it’s a huge step in a car that was not performing so well at the beginning of the year.

“If we do a good job. I think we can fight the rest of the season and that’s going to be our aim. It’s very tight so it’s not going be easy, but that’s the target that we have in mind.”

Given Barcelona is such an aero-dependent circuit, Alpine’s performance is very encouraging and suggests its early-season problems are behind it.

While the lead Alpine of Ocon was further from the outright pace in percentage terms in Spain compared to Portugal – with a deficit of 1.093% this weekend and 0.793% last weekend – the gaps do tend to get extended by the track configuration. What mattered was that the car has progressed from being a marginal Q3 contender in the first two race weekends to one capable of being in the top six.

Whether this performance can be repeated in Monaco and Baku, the next two circuits, is questionable although the characteristics of the car are encouraging. 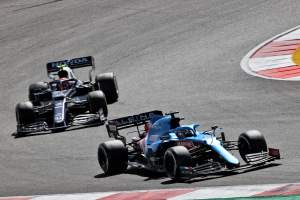 Its low-speed performance is positive for Monaco, while the car does appear to be relatively aero efficient on the straights despite its bulbous shape, which will also be beneficial in Azerbaijan.

McLaren still appears to be the strongest of the group on race pace, with Ferrari always the best-placed in qualifying, but it remains to be seen exactly where Alpine settles in.

But to have jumped into this lead group, potentially displacing AlphaTauri, is a positive step after a start to the season that suggested the team had regressed in relative terms.

“It is more important than the Portugal one,” said Alpine executive director Marcin Budkowski of his team’s Spain qualifying performance. “And Portugal was great because we were on the back of two disappointing races.

“There was pressure we were putting on ourselves to perform. The beginning of the season wasn’t up to our expectations, so it [Portugal] was great for the team, it was great for the drivers. But we knew the conditions were very tricky and we knew if we improved the car we didn’t quite know how much we improved it.

“Not only is Barcelona a benchmark in Formula 1, it’s also a circuit that wasn’t really our favourite in the last few years and we were particularly poor here last year.

“So it’s a combination of happiness [over] having confirmed and a bit of relief that actually the gains we are seeing are actually there and we are making the progress we thought we were making.

“This being said, it is super close and when it is so close, every hundredth is important. We have more coming for the next few races – a little bit more, not a huge amount.”