How Vettel’s new Ferrari contract has been complicated

For the first time since making his Formula 1 debut 13 years ago, Sebastian Vettel has some proper time off. He’s juggling three kids under the age of six, fixing up his house, going for long bike rides and even buying a home racing set-up to try his hand at online competition. 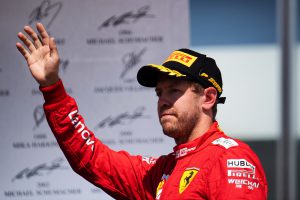 Why Vettel faces soul-searching over his F1 future
Read more

During the enforced hiatus, Vettel’s ended up with the life some people seemed to think he was heading for this year anyway. Vettel, some said, would escape his Ferrari deal early because of disenchantment with modern F1 and frustration that Charles Leclerc’s star is rising while his own fades.

There is no sign of Vettel leaving F1 with his tail between his legs. All the talk at the start of the year was of both Vettel and Ferrari wanting to continue their relationship beyond 2020. That remains the case now, but the situation has been complicated by the impact the global health crisis has had on F1.

This doesn’t mean Ferrari’s having second thoughts or needs to cut back. It doesn’t mean Vettel’s changed his mind and wants to leave. It relates to the timing of the discussions, the immediate context and the bigger picture.

For both parties, the early rounds of 2020 had the potential to impact negotiations. Is Ferrari competitive? Is Vettel in good form? Are Vettel and Leclerc working well together, or does Ferrari have a repeat of its lower moments from 2019 – like the Brazilian Grand Prix clash?

Instead, F1’s season is on hold until July at the earliest. Vettel says there’s a “high chance” a decision will need to be made before any racing has taken place in 2020. 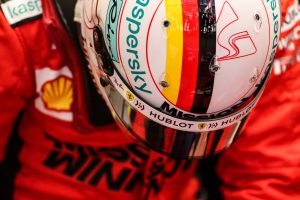 That means Vettel’s hand in terms of results is only as strong as his form from 2019, when he was beaten by Leclerc, and he cannot do anything on-track to bolster that. But on the flip side, with so much instability around F1, including chassis being carried over to next year, changing drivers is probably even less desirable for Ferrari than it would normally be.

This is bolstered by the fact there will likely be reduced pre-season testing for 2021 – which means everyone else finely tuned to their machines and a Vettel replacement having very little time to get acquainted with the nuances of their new team and car.

In one sense, things are simpler because Ferrari has made it clear that its priority is to retain Vettel, and now it has a decent run at having contract talks away from the stress of race weekends.

“It’s not like a couple of days after Australia we said ‘right, now [we’re having contract talks]’. We will make progress but I don’t think there’s a real timeline. So, whether it will be before the first race or not that depends on when we will have the first.” :: Sebastian Vettel

But just because the team and its driver are not racing does not mean contract talks have been at the head of the queue, even if agreeing a new contract appears to be a matter of when, not if.

“The main priority was to ensure that we’re dealing, all of us, with the situation in the right way,” Vettel says. “Therefore, everything was put on hold, and I can imagine that’s probably the same everywhere else.

“It’s not like a couple of days after Australia we said ‘right, now [we’re having contract talks].

“We will make progress but I don’t think there’s a real timeline. So, whether it will be before the first race or not that depends on when we will have the first.”

Aside from timing complications, there is also the matter of what the new deal is. Vettel likes three-year commitments, and has hinted that he would like similar – or at least that it is not unrealistic to commit to multiple seasons.

The last time Vettel and Ferrari had to go through this process was in 2017, when he was undisputed top dog alongside Kimi Raikkonen, there was a different team boss in charge and his reputation was free of the mistakes made in subsequent seasons.

“I think whatever the deal will be like, it will be whatever I and the team will be comfortable with,” the 32-year-old says. “So in terms of duration I don’t know.

“Normally the contracts I’ve had in the past were all a three-year deal. I know I’m one of the more experienced drivers in Formula 1 but I’m not the oldest and I don’t think there’s an age limit in this regard.

“So, I think, as I said, it will be depending on what we feel comfortable with.”

What each party will be comfortable with is not that easy to determine.

‘Normally’ Vettel can command whatever he wants. The last time Vettel and Ferrari had to go through this process was in 2017, when he was undisputed top dog alongside Kimi Raikkonen, there was a different team boss in charge and his reputation was free of the mistakes made in subsequent seasons. 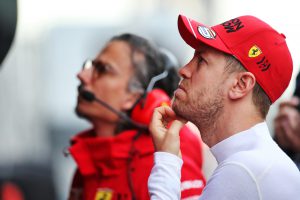 Now, with Leclerc signed up to a long-term deal as the future of Ferrari and the team’s faith in Vettel’s ability to piece together a title bid potentially shaken by the errors of recent seasons, what Ferrari is comfortable with might not be the same as Vettel’s view on the matter.

It also comes down to how far into the future Vettel is willing to commit to. He made it clear last year his interest in staying in F1 would be influenced by how appealing the new rules are.

Those rules were meant to come into force in 2021, but have been deferred to 2022 and some want them pushed back to 2023. Which means at least one interim season with the status quo maintained (sort of – Vettel also points out that some elements of the rules overhaul, like the budget cap, will be in place and some frozen areas of car development help make up a stop-gap year).

Vettel’s opinion of the new rules will not be set until he experiences them for himself, because only then will he discover if the racing has improved. He says that will determine whether the trade of making the cars slower, which he says is “sad”, will be worthwhile.

So while Vettel suggests the delay doesn’t make a difference to the discussions, it must have some influence. If the new rules were coming in next year as planned, it would be a relatively simple question of whether he wants to be part of the next era – which he does. Then it’s a matter of determining the length of the contract, and he could have even tried to get the option of walking away at the end of 2021 if the new rules aren’t to his liking.

Either way, it doesn’t change the fact that one of the big stories in 2020 will be whether Vettel will stay with Ferrari and what his deal will be

Instead, Vettel needs to decide how to cover 2021 while working out how much further beyond that he commits to. The likeliest outcome is surely that Vettel uses whatever sway he has in discussions to maximise his security. That would make a three-year deal, or at least a ‘two plus one’, desirable, so he can navigate the short-term and be around for when the new cars come in, whether that’s in 2022 or 2023.

That’s important because he is keen to at least try the new cars – even if that era ends up not being something he wants to be part of – and has no short-term desire to leave.

“On the rules [delay], I’m sort of half-half,” Vettel says. “On the one hand I was quite looking forward to drive the new cars, now that’s not going to happen for another year, which is sad.

“On the other hand, the cars now will be – from what I’ve heard – still quite a bit faster than the new ones will be. If you’re going faster, in a way it is more exciting than slowing down.

“It depends what the trade comes with, if the racing is so much better then I think we will forget very quickly, but if the racing happens to be the same, and the car is just slower, it’s a worse compromise.”

Vettel is fond of patience and in these strange times he is having to exercise it in different ways. But his commitment to staying in F1 with Ferrari appears unaffected.

He may end up with a different kind of contract to what he’s used to, or one with more wiggle room, to navigate F1’s short-term uncertainties, or it will be business as usual with a new three-year deal and Ferrari retaining his services to the end of 2023.

Either way, it doesn’t change the fact that one of the big stories in 2020 will be whether Vettel will stay with Ferrari and what his deal will be.

F1’s unusual circumstances mean we’ll probably get the answers before racing even begins.