How Sunday became the biggest day in McLaren’s modern history

McLaren’s sale of a substantial part of its Formula 1 team comes just hours before the final race of the 2020 season could secure its best result in almost a decade.

The sale alone makes December 13, 2020, a significant date in McLaren’s modern history, with McLaren Racing CEO Zak Brown calling it a “key moment” in its progress, “the start of the next chapter” and something that will “turbocharge” the team’s efforts.

Clinching third in the constructors’ championship may just make it the most important day in an awfully long time.

“This investment gives us those resources, and financial independence” :: Zak Brown

In the last few years McLaren’s prospects in F1 and as a wider company have endured a rollercoaster ride.

Veteran team boss Ron Dennis was ousted in 2017, and a combination of poor results plus the split from Honda after a miserable 2015-17 partnership had a significant financial impact.

McLaren’s F1 team is relatively healthy, with good future prospects under the leadership combination of Brown and team principal Andreas Seidl, who have played a key role in its recent turnaround.

But it is vulnerable as part of a wider McLaren Group that has been in serious financial difficulty.

Chairman Paul Walsh, brought in earlier this year, said it had a fundamentally “fragile” business model that has required serious work to rectify.

The company made redundancies, including among the Racing division, after a major early-year cash influx from majority Group owner, Bahrain’s Mumtalakat group, but also had to get a $150m loan from Bahrain’s national bank as well.

McLaren is also in the process of selling its Woking headquarters and leasing it back long-term to raise funds.

In the context of the wider struggles, the fate of the F1 team was questioned. Not long after Williams’s F1 team was put up for sale earlier this year, McLaren considered the possibility of selling a minority stake among its various options.

That has now materialised in the form of a consortium of US investors, via an initial connection through Mumtalakat, agreeing a 15% stake rising to a maximum 33% – keeping McLaren Group as the majority owner but giving up a substantial part of the business in return for £185m in investment.

It’s extremely important because it reduces further pressure on the Group at a time of great financial sensitivity while also reinforcing the inherent strength of the Racing division.

This is crucial in McLaren’s ambitions. Since its nadir across the Honda seasons McLaren has had to confront the reality that it had also slipped from the heights of its regular race-winning and title-challenging days of just a few seasons earlier.

The 2018 season with Renault power (pictured below) forced it to accept its car development capabilities were not what they were thought to be, a major restructuring took place, and two seasons later McLaren’s on a handsome upwards trajectory again.

McLaren has serious momentum and opportunity in F1 for the first time in eight years. A return to Mercedes power and introduction of a $145m budget cap in 2021, allied with major new technical rules in 2022, create a window for it to bridge the gap that has emerged to the likes of Mercedes and Red Bull.

Major infrastructure projects like a new simulator and windtunnel have been undertaken to give it the resources it needs. 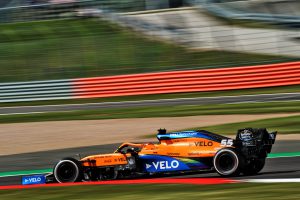 That technology, the right personnel in place and the means to operate at the budget cap will eliminate many meaningful deficits to F1’s current benchmarks.

“McLaren was always going to continue in Formula 1,” says Brown when asked by The Race what the investment does for McLaren’s prospects.

“But given our rich history of success, it was very clear that the shareholders have one goal in mind from a competition standpoint: that’s to get back to competing for the world championship.

“And so this investment gives us those resources, and financial independence.

“So now the racing team is able to compete at the budget cap, spending and investing in the capital expenditures required to get top-line drivers, the best power unit in Formula 1 with Mercedes, to give us the resources to meet our ambition.

“That’s what this means for McLaren Racing. We’re extremely excited.

“We can have our cake and eat it. And play to win” :: Paul Walsh

“It’s obviously been a very difficult year for everybody in Formula 1. And I would argue probably as impactful on McLaren Racing as anyone.

“Just to be looking forward now, having all the tools we need, is extremely exciting and I think we have a very, very strong future ahead of us.”

So McLaren’s participation in F1 was not in the balance. But financial uncertainty would have undermined the progress.

It could have caused those projects to grind to a halt entirely (the build of the windtunnel and simulator had been paused), forced key people to leave, disrupted the journey behind the scenes and left McLaren in a vicious circle not dissimilar to the one that engulfed Williams, with a lack of cash breeding poor performance, poor results, and poor financial reward.

If there was confidence this would be avoided before, it is now rooted in reality.

“It would have been extremely difficult” to make further progress without this investment, Brown concedes, and ambitions would have had to be lowered.

So the vital financial support for the F1 team has been reinforced and targets remain high but achievable, all while maintaining continuity within the organisation too as Brown has committed his long-term future as part of the investment.

“Here we can have our cake and eat it,” says Walsh. “And play to win.”

THE FIGHT FOR THIRD

McLaren’s future does not ride on the difference between third and fourth in the constructors’ championship, but it would be a significant additional milestone in its recovery from the malaise that set in across the 2010s.

Finishing third would equal McLaren’s result in 2012, the last time it won a grand prix, and you have to go back a year further to 2011 before McLaren finished any higher in the standings. From 2013 to 2018 inclusive it was never higher than fifth and fell as low as ninth.

McLaren is one of three teams in contention to finish third in the constructors’ championship heading into the Abu Dhabi season finale. It is 10 points behind Racing Point, with Renault still in outside contention despite being a further 12 points down.

With Lando Norris and Carlos Sainz Jr qualifying fourth and sixth respectively at Yas Marina, the first time McLaren has had two cars starting in the top six since the Italian Grand Prix in early-September, there is a genuine chance of overturning that deficit.

Its hopes are boosted by Sakhir Grand Prix winner Sergio Perez starting 19th thanks to a back-of-the-grid penalty for a change of V6, MGU-H and turbocharger, with Lance Stroll the best-placed Racing Point in eighth on the grid.

“With the car they have, Checo is going to easily go through the field” :: Carlos Sainz Jr

“It’s a very small part of it, 90% of the work we have to do in the race,” said Norris of McLaren’s qualifying performance.

“It’s not something we have to get relaxed by or be happy with, we still have to concentrate on maximising our own race, still looking ahead and not looking behind because we know Racing Point are going to be extremely quick, we know the Renaults are going to be quick and we know Sergio’s going to be coming through.”

Sainz, who has the advantage of starting on the preferred medium-compound Pirellis with Norris having used softs to set his Q2 time, believes Racing Point’s pace will make it difficult to close out third.

If the McLarens finish where they are starting, it would be worth 20 points meaning Racing Point would hold onto third if it gets both cars into the top eight.

“I’m pretty convinced that the two Racing Points are going to finish in the top eight with the car they have, the pace they showed in the race simulations and the pace they’ve shown on Sundays in the last couple of weeks,” said Sainz.

“I’m pretty sure they are going to make it through the field and they’re going to try and beat us even though they are starting a bit out of position.

“With the car they have, Checo [Perez] is going to easily go through the field and Lance is in a strong position to score good points.

“So we’ll focus on our race, try and finish near the positions where we are starting or try and move a bit forward, but in the end it’s going to depend more on what the Racing Points do.”

Racing Point has never finished as high as third in the constructors’ championship, although it did finish fourth in the standings in its Force India guise in 2016 and ’17 (pictured below).

On average, the Racing Point has been the third-fastest car this season so the McLaren drivers are right to warn of the threat of its race pace.

However, Racing Point has managed only three double-points finishes in the last eight races so its priority is to have a straightforward race with both cars to protect its position.

“We just have to keep our heads down and do a good job this weekend, make sure we have a normal race weekend and we’ll see where we finish.

“It would be a tremendous accomplishment if we could finish P3 but by no means will it be easy. It will be tough.”

Renault’s hopes appear to depend on the McLarens and Racing Points hitting trouble in an attritional race.

Although both Renault drivers have free tyre choice and can therefore avoid starting on softs, there has been little sign that its race pace is stronger than its qualifying speed.