How Hamilton sees Mercedes dilemma given ‘loyalty’ to Bottas

With uncertainty still surrounding the identify of his 2022 Formula 1 team-mate, Lewis Hamilton has explained his position on the decision Mercedes has faced of choosing either to keep on Valtteri Bottas for a sixth season or bring in George Russell.

There has been no confirmation of the identity of the second Mercedes driver for next year yet, but Hamilton has often spoken positively about the benefits of having Bottas alongside him, describing him in June as a “fantastic team-mate” and saying then “I don’t necessarily see that it [the line-up] needs to change”.

Inevitably, Hamilton was asked about his involvement in terms of lobbying for his preferred team-mate at Spa in the build-up to the Belgian Grand Prix weekend. While he referenced the fact that he had shown “loyalty” to Bottas in the past with his public statements, he stressed that he will be happy with whatever decision Mercedes takes.

“I’ve been vocal in the past of my loyalty to Valtteri and worked incredibly closely with him – I think our working relationship is better than ever,” said Hamilton when asked how involved he has been discussions with team principal Toto Wolff about the identity of his team-mate.

“Toto’s a great leader and as I said in the past, we always stay connected. Of course, we talk about these things and naturally we’re part of the same team, we want what’s best for the team moving forwards, we want to win more championships, so we just have conversations. 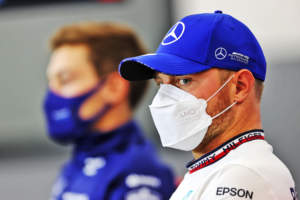 “But at the end of the day it’s down to him and the board at Mercedes to make that decision and we’re part of the team so that’s no problem, whichever way they go, naturally.

“At the moment, I’m just trying to put all my energy into doing the best I can this season.”

Given that both Bottas and potential replacement Russell used the phrase “no news to share” repeatedly when asked about the situation at Spa earlier in the day, it is possible that a decision has already been made but that it will not be made public until a later date.

Russell suggested nothing would be announced during this weekend or next week’s Dutch Grand Prix, leaving the door open to a possible public statement in the build-up to the Italian Grand Prix at Monza.

As Hamilton has said, it’s only natural that he will have had conversations with Wolff about such a significant decision. His new two-year deal to remain at Mercedes until the end of 2023 was announced in early July so he has the team’s backing as its de facto lead driver.

There is no indication that Hamilton has pushed aggressively terms of his choice of team-mate, but it’s logical that he would favour maintaining the status quo by continuing to have Bottas, who is quick enough to push him in qualifying but is not at his level consistently, alongside him. 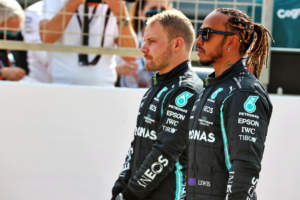 Given the duo have helped Mercedes to four consecutive constructors’ championships, and the current lead of those standings this year, it’s clearly an effective pairing.

But given Hamilton will be 38 at the end of that next deal, there’s a strong – and perhaps compelling – case for Mercedes bringing 23-year-old Russell into the fold given Wolff has to have a possible post-Hamilton future in mind.

By framing his support of Bottas as “loyalty” but stressing he is happy with whatever Mercedes chooses, Hamilton has made it clear that any preference he did have is not one that would be in any way destructive were Russell to be the driver chosen.

48 mins ago Formula E No Comments