Lewis Hamilton gave his clearest criticism yet of the current Formula 1 tyres in the lead-up to the Belgian Grand Prix.

Everything he said about the limitations of the tyres was indisputably correct.

What was not covered was how F1 has put itself into this position by its own actions in the past.

Until it is recognised that the commercial interests at play when the current tyre supply model was embarked upon in 2011 led to a fundamentally flawed concept, the problem will remain.

Since Pirelli replaced Bridgestone as the standard F1 tyre supplier, the model has been that Pirelli pays F1 to be the supplier. Previously, tyre suppliers were paid by the teams.

The new model, negotiated by Bernie Ecclestone, was embarked upon because F1 was reluctant to take on the true underlying problem – out-of-control costs ill-matched to the reduced available income, post-2008.

So now we had more downforce than any other F1 cars in history, more torque, massively more weight – and tyres designed to a budget

Having a paying tyre supplier was a quick and easy solution to one of the biggest cost drivers. But it was ill-advised.

Any company paying serious multiple millions to provide F1 with a control tyre that doesn’t have to beat a rival was never going to invest heavily in new technologies that would advance the tyres at the rate the cars were being advanced. It did the only logical thing it could do. Within the constraints of the budget, it supplied a tyre to meet what F1 said its aims were.

Those aims were not well thought-out, did not initially involve the views of the drivers and the situation was doubly exacerbated by the advent first of the hugely powerful and heavy hybrid cars in 2014 (pictured above) and subsequently by the massive downforce unleashed by the wider cars of 2017.

So now we had more downforce than any other F1 cars in history, more torque, massively more weight – and tyres designed to a budget.

So since 2011 we have had variations of the theme of drivers not being able to push hard or race easily because of the limitations of the tyres. Pirelli has responded to each of F1’s often contradictory targets with various tweaks to its existing concept of tyre, but under the commercial model in place it couldn’t feasibly consider the sort of R&D investment and highly labour-intensive production methods needed for a wholesale concept change to a more advanced family of tyre.

To expect anything else is not reasonable. It would be the equivalent of taking on a driver based on the amount of sponsorship he could bring – and then complaining that he’s not fast enough.

Hamilton was keen to stress this criticism wasn’t borne of ill-feeling towards Pirelli.

“One of the reasons I went to Paris when they were doing the Concorde Agreement, was trying to help them involve the drivers,” he explained.

“We’re not working against [Pirelli]. We’re part of this sport and we want to help it be great, just as [Pirelli] do.

“What [F1] keeps doing is making these cars bigger, heavier and therefore it does make it harder for a tyre manufacturer and we have less testing so there are a lot of obstacles.

“We want tyres that grip for longer but we don’t want overheating – so we can continue to thrash these cars around and really get close to other cars” :: Lewis Hamilton

“However, each year we’ve had a tyre from Pirelli that’s not what we wanted as drivers. We’re constantly complaining about overheating of tyres and when you’ve got a fundamental issue of turbulence when running behind another car – you’re affected from a car ahead from 7s away – mechanical grip is what we really need. When we have that downforce deficit we need the best mechanical grip we can get – and that’s the tyres.

“When we had the tyre war they did have lighter cars but also you had two companies pushing each other to the limit. 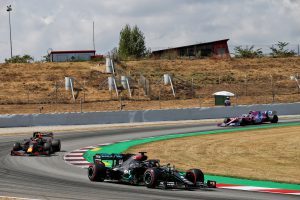 “But at the moment no one’s pushing Pirelli except for us in what we say – but we have to be very careful in what we say because we don’t want to upset Pirelli and we’re trying to be constructive when we talk with them.

“We want tyres that grip for longer but we don’t want overheating – so we can continue to push and thrash these cars around and really get close to other cars and pull off these manoeuvres.”

They are laudable aims that if achieved will unquestionably improve the spectacle of the racing. But achieving them probably requires more than just a clearer target letter to the tyre supplier. It probably involves a fundamental re-evaluation of the commercial model.