How Claire Williams’s F1 era should be remembered

Claire Williams steps down from her role as Deputy Team Principal of one of Formula 1’s legendary names after seven-and-a-half volatile years following the Italian Grand Prix. During that period, Williams flirted with recapturing the glory days before sliding to the lowest ebb in its history.

Despite the ‘deputy’ in her job title, with Frank Williams continuing as team principal, Claire Williams was in day-to-day charge and very much the de facto team boss prior to the sale to Dorilton Capital. As such, she has been at the heart of the key decisions the team has made during this period.

This is in spite of the fact she was far from pre-ordained as taking up such a role with the team. Originally, she worked in motorsport outside of Williams on the media team at Silverstone and when she did join the F1 team it was on the communications side despite the initial reluctance of Frank Williams. She went on to become Head of Communications before side-stepping into the role of Head of Investor Relations in 2011.

With Frank Williams now in his 70s, the decision to make Claire deputy team principal in 2013 was a logical one given the desire to underpin Williams very much as a family team. Automotive industry stalwart Mike O’Driscoll also joined in June 2013 as Group CEO, effectively forming a managerial double act with Claire Williams. Initially, the experience of O’Driscoll made him effectively the senior partner in that dynamic, but as time went on it’s understood Williams very much took tighter control of the helm.

While the team was struggling on track at this time Claire Williams became deputy team principal, with the 2013 campaign a challenging one thanks to the struggles to master the vagaries of the Coanda effect exhaust, the building blocks were being put into place for the 2014 season. 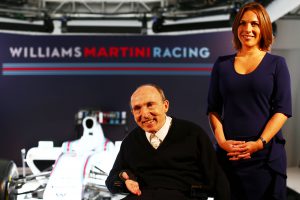 A seven-year deal for Mercedes engines was signed in 2013, while in July Pat Symonds joined as chief technical officer as part of a series of recruitments. With Ferrari refugee Felipe Massa signed up to partner Valtteri Bottas for 2014, the components were in place for a very promising start to the 1.6-litre V6 turbo hybrid era.

But this was at a point where the dice were becoming heavily-loaded against Williams. The commercial terms agreed between the teams and commercial rights holder CVC Capital Partners massively favoured the big teams. While Williams did well to extract a $10m ‘heritage’ payment, overall it made life extremely difficult for the team financially. And with the economic climate making it difficult to draw in commercial partners, even high-profile deals such as the Martini contract covering 2014-18 were at a bargain basement price for a title sponsor.

While the team was successful in 2014, taking a pole position in Austria courtesy of Massa and finishing third in the championship, there were also signs of the underlying technical weaknesses at Williams that needed to be tackled. In particular, the aero side of the team, which had been a weak point going back to the period after Adrian Newey left the team in 1997, was a concern.

In 2014, the combination of a solid car that did develop well and the advantage of the Mercedes engine package was the key to the success. But as other engine manufacturers closed the gap and pushed on aero-wise, the weakness of the Williams car was exposed. Although it retained third place in 2015, the pace deficit to the front was dramatically increased. In fact, Williams slid further and further off the pace every year from 2014 to 2019 prior to this year’s improvement.

The Williams team was well-aware of the work that needed to be done technically. But Symonds left at the end of 2016, partly motivated by the fact that the on-track success had not led to the expected levels of investment needed to build on that. Early in the hybrid era, the team had sharpened up operationally and was improving on the aero side but financial realities led to a loss of momentum. But the slide in competitiveness that was to follow cannot only be explained by the financial situation as Williams had the budget to do far better.

Despite Symonds’s exit, the appointment of Paddy Lowe as chief technical officer in February 2017 seemed so promising. He had been executive director at Mercedes since 2013 and was part of the dominant team in F1, so this signing appeared to be a coup.

Yet, despite his undoubted technical skill and strong CV, which included playing an integral role in the Williams active ride programme of the early 1990s, Lowe’s stint was not a success. After the struggles of 2018, he oversaw a review of the aerodynamic testing processes that it was hoped would produce a marked improvement for 2019, but the result instead was the worst car ever made by the Williams team.

To add to that, the car was late, the team had to modify features of what it thought were innovative mirror and suspension designs for legality reasons and, with the car clearly well off the pace, Lowe had to leave.

Against this, the financial outlook continued to look worse, exacerbated by the team slipping into loss-making thanks to finishing last in the championship in 2018 and ’19. A majority stake in Williams Advanced Engineering was sold, loans were consolidated but eventually Williams was out of credit. The only option was to launch the strategic review that led to the sale of the team.

As the public face of Williams, it’s inevitable that Claire Williams has borne the brunt of the criticism for the team’s slide. Mistakes have certainly been made, perhaps chief among those on the technical side with the determination to remain fiercely independent rather than aligning with a bigger team.

This left Williams struggling along as what is, in modern terms, a small team trying to take on the big ones while losing out to those who had taken some of the available technical shortcuts. This course was among the disagreements that played a role in losing the backing of Lawrence Stroll, who then invested heavily in Racing Point instead.

But the decline of Williams is a far longer story than one that started in 2013, with the various seeds for its eventual sale sewn over a long period, stretching back as far as the loss of Newey in 1997. Formula 1 has moved on, Williams would not or could not move with it and the 2013 commercial agreements meant that the progress shown in the early years of the hybrid era turned into a battle simply to survive.

Eventually, the economic realities struck home and the team was sold. Perhaps this needed to happen earlier, but the fact that the team has survived probably the harshest financial environment it has ever faced is a win. For all of the ups and downs, the good and the bad decisions, that’s primarily how Claire Williams’s time in charge should be remembered.

The greatest mistake would have been for the Williams family to have tried to hang on even longer even once it was clear that the money was going to run out.