Lewis Hamilton’s Portuguese Grand Prix victory was an exhibition of three key traits that have led him to dominate the modern era of Formula 1.

Hamilton fought back from losing the lead at the start of the Algarve race to pass Mercedes team-mate Valtteri Bottas during the opening stint and romp clear to win by 25.5 seconds, the biggest F1 winning margin since the 2016 Chinese Grand Prix.

It shaded Hamilton’s hammering of Bottas in Spain earlier this season, and is Hamilton’s best margin since he won by half a minute in the 2014 British Grand Prix – coincidentally also ahead of Bottas, when the Finn was driving for Williams.

Hamilton’s reaction to slipping back in extremely low-grip conditions at the start, his gauging of tricky tyre usage at the unknown Algarve circuit and sheer speed after he got past Bottas were a showcase of three vital parts of the skillset that has made Hamilton a six-time world champion and winner of 92 grands prix.

They contributed to what Mercedes’ engineering chief Andrew Shovlin hailed as a fitting drive to break the all-time win record. 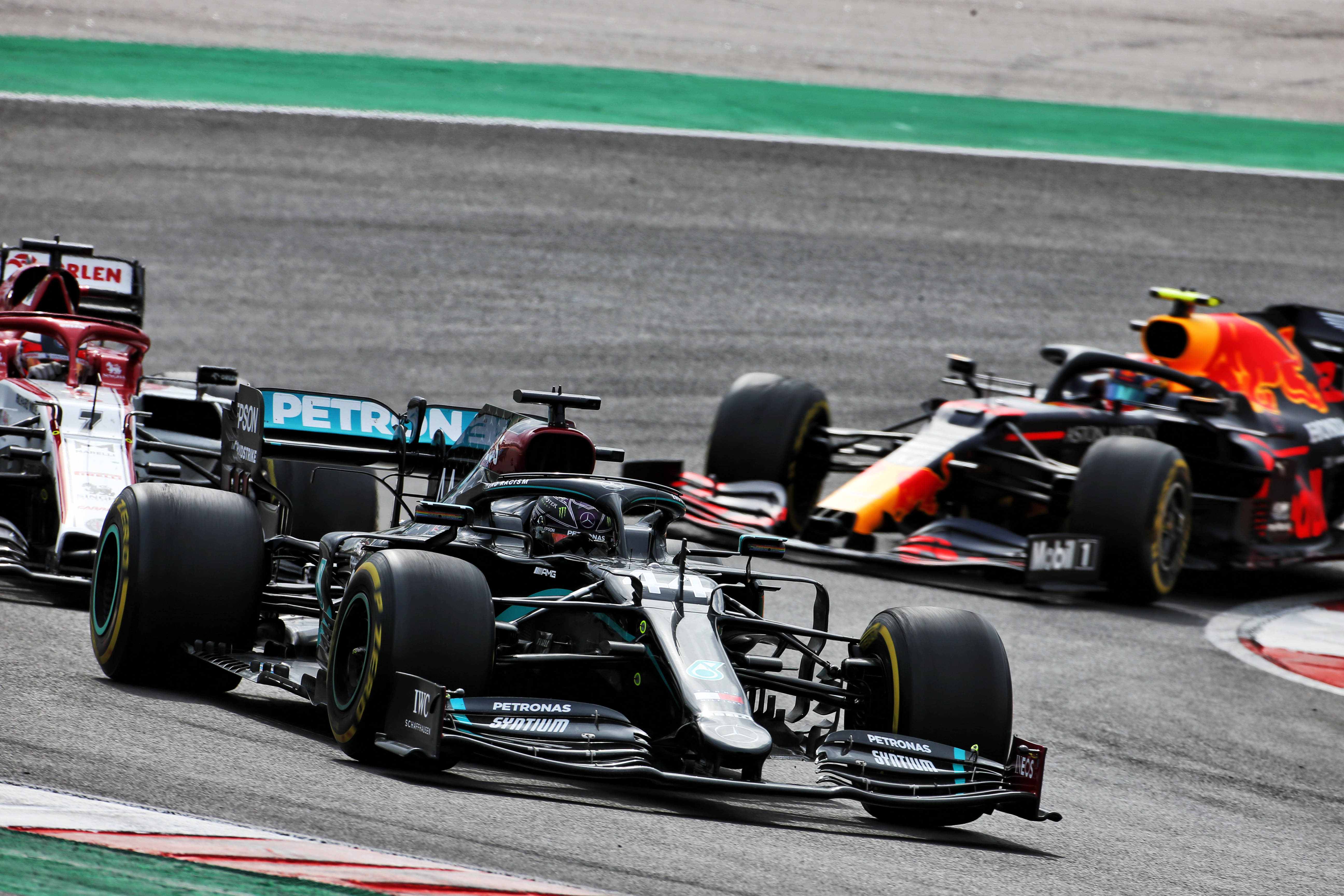 “It was one of those days where you saw Lewis at his best,” said Shovlin.

“And I think also the sort of more recent version of Lewis, where he was pretty calm losing places off the start.

“He didn’t take risks. He acknowledges that he was a bit cautious in those conditions but he knew that it would all come back to him.

“He clearly had pace in hand a bit behind Valtteri and as Valtteri started to struggle with the tyres a little, relatively early on in that first stint, as Valtteri was feeling the car was quite inconsistent, you saw that suddenly Lewis was just up behind him.

“And with Valtteri struggling a bit with the balance, Lewis was able to make that pass and then he just managed the race.

“His pace was incredible at times, just how much he had in hand.

“It was definitely one of these races where it was sort of fitting to go to the top of the all-time winners chart with a performance like that.” 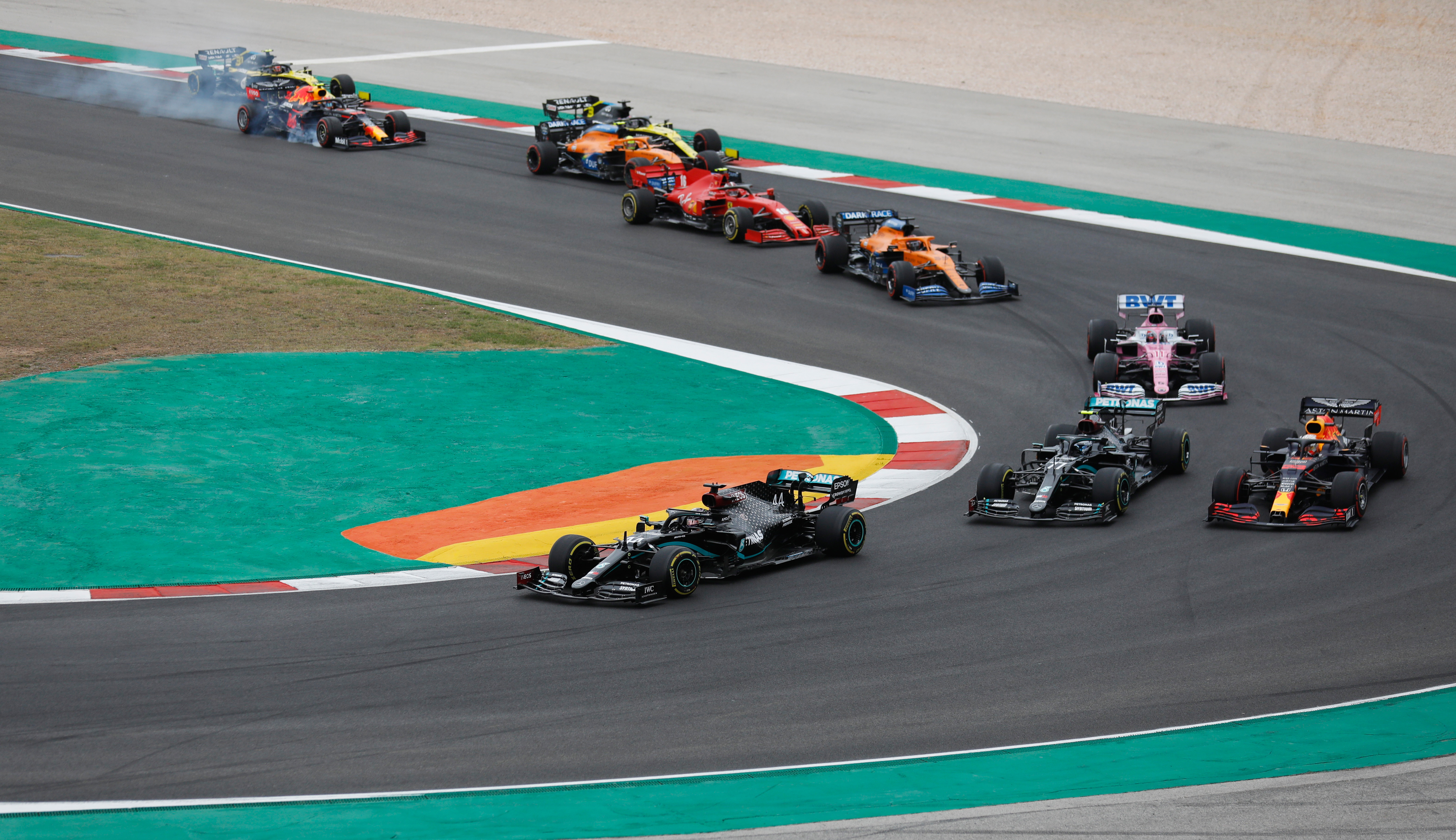 Shovlin admitted Mercedes was left feeling “pretty nervous” during the opening laps as its medium-shod cars struggled to generate tyre temperature and were vulnerable to those on softs, like Sainz.

He conceded that Hamilton took a bit longer to clear that early difficult phase than Bottas but suggested Hamilton was being cautious, and reiterated it was “just impressive how calm he stays under what were really, really tricky conditions”.

Later in the opening stint Bottas was the one struggling – he later lamented, “I don’t know why I didn’t have the pace, I was pushing hard but I couldn’t go faster” – and Hamilton came to the fore.

He said after the race he knew it would be “all about tyre temperatures” so he had geared his approach for the grand prix, not qualifying, which Shovlin explained was not about major car set-up as both drivers were running the same wing levels.

“It’s more he’s talking about the balance of the car to use the tyres, not be too hard on either end,” said Shovlin.

This meant Hamilton’s prodigious tyre understanding proved vital. He had secured pole by opting for a push-cool-push run in the top-10 shootout vs Bottas only opting for one lap, and then in the race was able to strike the balance between tyre warm-up and management. 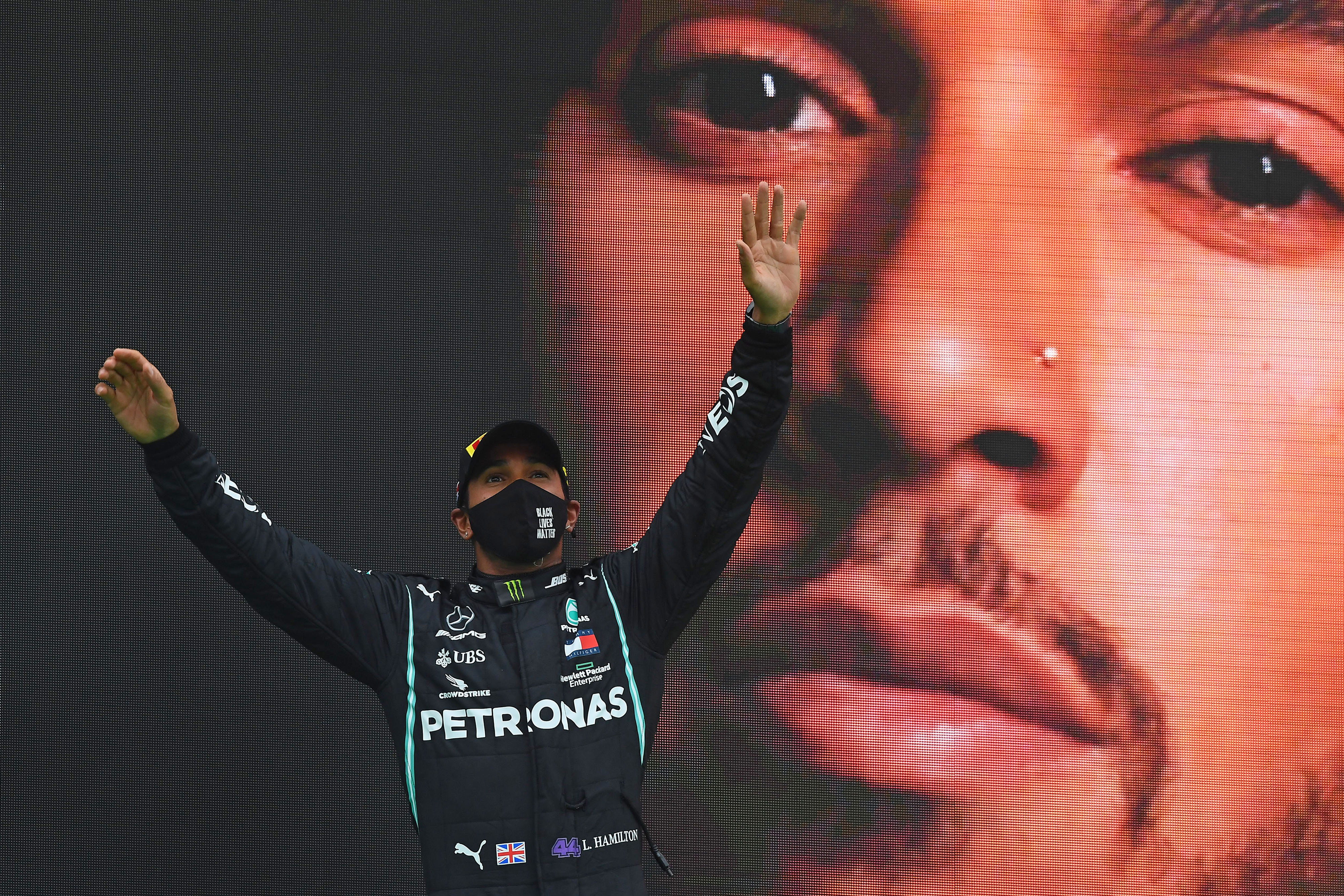 “Qualifying was really all about warm-up and temperature there,” said Shovlin.

“Then the race it’s the left hand side tyres that get a hammering here, and it’s about not working the fronts or rears too much, because then the balance starts to get away from you.

“Lewis is just naturally good at managing tyres and has just got this really good feel for where he’s hurting them and he’s able to keep the rubber on them.”

As Mark Hughes explained in his race analysis, how the two drivers coped with the puzzle of the front-left graining and the tyre temperatures dropping was vital to how the grand prix played out.

Shovlin revealed the extent to which Bottas was struggling compared to Hamilton as the gap ballooned from less than 10s before their respective pitstops (with less than half the race remaining) to more than 25s at the end. 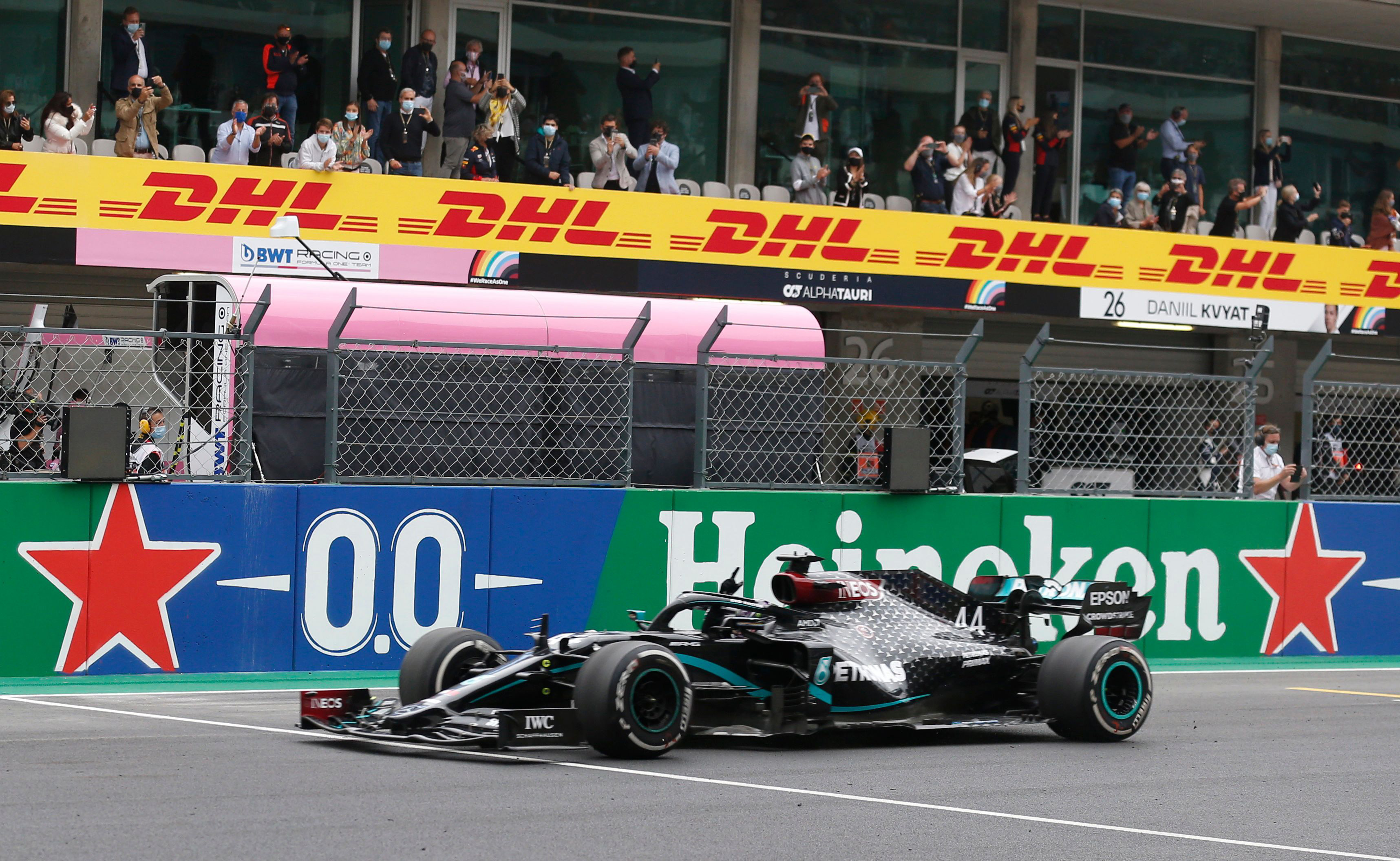 “We spend 90% of races where we’ve got too much temperature and it’s a case of trying to keep the tyres cool, but you’re in the opposite situation in these cold conditions, made worse with a bit of rain kicking around,” said Shovlin.

“And it was most evident on that hard tyre transition. Lewis actually got it to work quite well, quite quickly.

“Valtteri dropped into some backmarker traffic which meant he was having to run at their pace, not the natural pace, and at that point there was about 10 degrees of difference in the tyre temperature.

“It was manifesting itself near enough a second of laptime. Valtteri lost quite a lot of race time there with the backmarkers and not being able to carve through them as quickly as if he had warm tyres.” 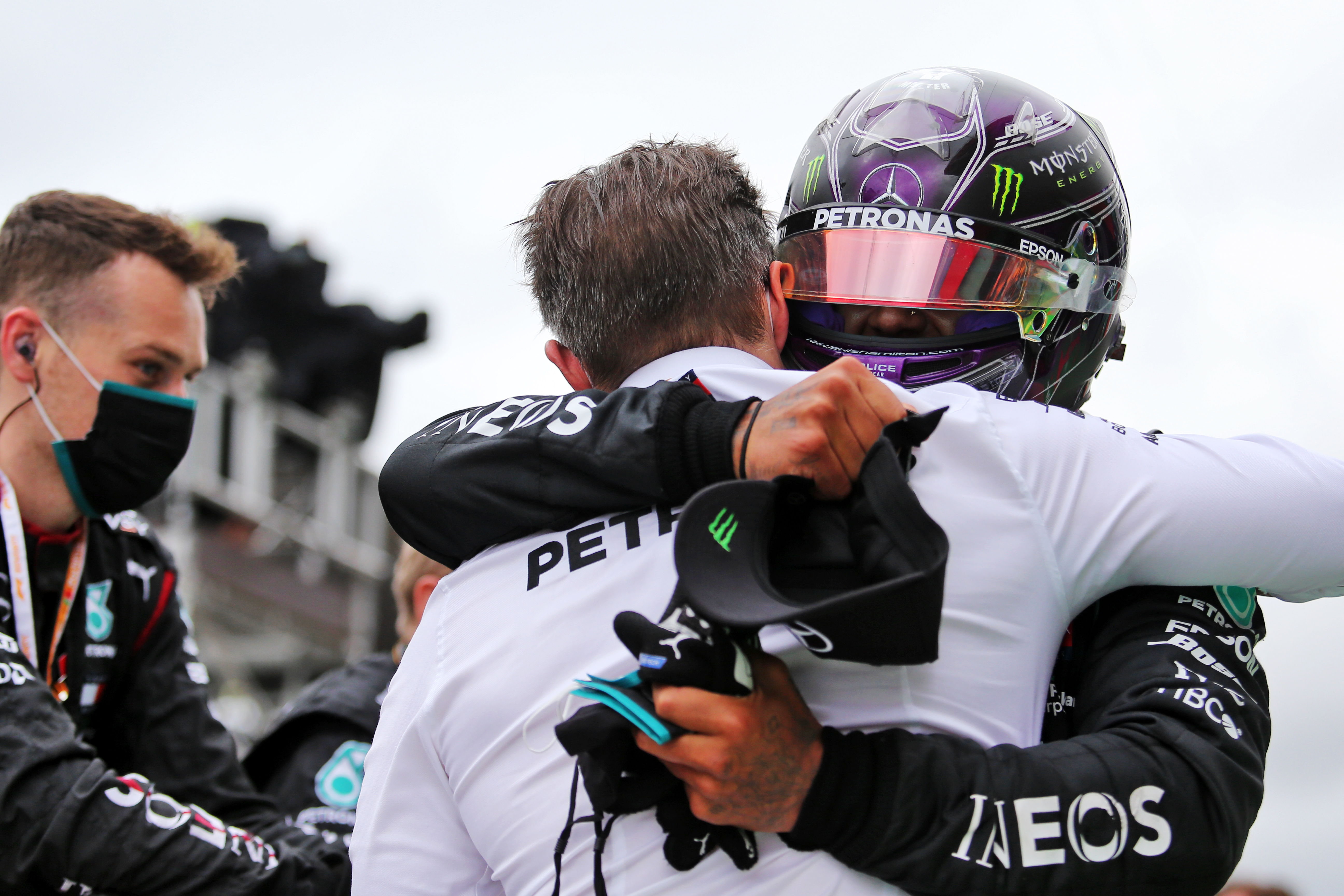