Red Bull Formula 1 boss Christian Horner has emphatically ruled out Sebastian Vettel returning to the team, saying it is a “definite no” and Vettel is “aware of that”.

Vettel will leave Ferrari at the end of the 2020 season after the Italian team opted not to negotiate a new deal with the four-time world champion to sign Carlos Sainz Jr instead.

With Mercedes committed to retain Lewis Hamilton and Valtteri Bottas as a first priority, Red Bull represented the only leading option for Vettel but it has consistently stated its preference is to keep Max Verstappen partnered with Alex Albon. 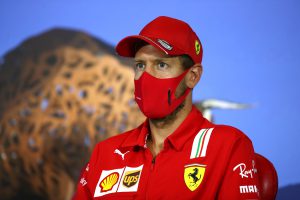 Vettel said on Thursday ahead of the Styrian Grand Prix he would “probably” say yes to rejoining Red Bull if the opportunity is there, but Horner has ruled out extending an offer to the driver who won his four world titles with the team.

“Obviously the topic has been raised and we had a brilliant time with Seb,” said Horner to Sky Sports F1 during opening practice at the Red Bull Ring on Friday.

“He’ll forever be a part of our history and we didn’t expect him to be on the market.

“Our commitment is to our existing drivers, we think we have a great pairing in Max and Alex and we think that has great potential for the future as well.

“Unfortunately it’s not something we’re going to be able to accommodate.”

Asked if that was a definite ‘no’, Horner replied: “That is a definite no, I’m afraid, and he’s aware of that.”

His best option for a competitive seat in the midfield is to work his way into Racing Point as it becomes the Aston Martin works team, but with Sergio Perez on a long-term contract and Lance Stroll the son of team owner Lawrence, that seems unlikely.

Horner said: “Lance isn’t going to get barred! Contacts are between teams and we never know what’s in them.

“Yes, I’m sure they have options or break points, but it’s none of our business.”

A Red Bull return for Vettel has seemed unlikely all the while Verstappen remains at the team, and the young Dutchman’s new long-term deal – signed at the start of 2020 – in theory commits him to Red Bull until 2024.

Albon replaced the underperforming Pierre Gasly midway through last season, as an F1 rookie, and has shown flashes of impressive speed.

He should have finished on the podium in Brazil last year and could have won last weekend’s 2020 season opener, but both races were wrecked by clashes with Lewis Hamilton.

Asked if he’d welcome Vettel at Red Bull, Verstappen said on Thursday: “I was on a TV show on Monday and I was sitting next to Seb and I got this question.

“And I was just trying to be polite and nice by saying that I could imagine it.

“But at the moment I think the team is very happy with both of us. And I have to say I’m also really happy with Alex as a team-mate.

“He’s first of all a very nice guy in the team which is really good for everyone.

“He’s good with setup so we both give good feedback to the team.

“And he’s a fast guy so I don’t think there’s any reason to change and I think Christian and Helmut can back that up.

“So, I don’t know. It’s also not up to me at the end of the day you know to decide these kind of things.”