Jul 5 2020
By Scott Mitchell-Malm
No Comments

Max Verstappen was running in second place behind Valtteri Bottas early on, with medium tyres compared to the Mercedes’ softs setting him up for a longer first stint.

However, Verstappen’s race was ruined before the first round of pitstops even started when his Red Bull seemed to lose drive and Verstappen complained of the anti-stall system repeatedly kicking in.

He made it back to the pitlane but was forced to retire the car.

Team-mate Alex Albon was in contention for his maiden grand prix win late on in what turned out to be a chaotic race as a Red Bull strategy gamble under a late safety car put him on fresh softs while the Mercedes drivers were on hards. 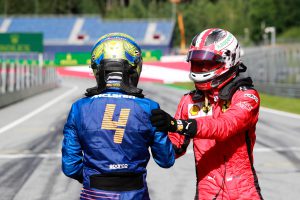 The winners and losers of the Austrian Grand Prix
Read more

However, Albon clashed with Lewis Hamilton and was spun down the order, then failed to finish as he too suffered a reliability problem.

“The first race of the season ended with three of our cars retiring, which is disappointing. So the only positive is that [Pierre] Gasly drove well to give AlphaTauri some points in their first race,” said Honda F1 technical director Toyoharu Tanabe.

“For Aston Martin Red Bull Racing, Verstappen was going well from second on the grid, until he had to retire due to an electrical issue.

“Albon was very unlucky to lose second place in the last few laps, but he was still fighting for points until he also had to retire, due to a suspected PU electrical issue.

“At the moment, we are investigating the causes of the two failures.

“We stay here in Austria for the second round next weekend and in the limited time available we will analyse all our data and try and take countermeasures to ensure we perform more reliably in Round 2.”

Red Bull team principal Christian Horner had initially indicated to Sky that that the problems that ended his two drivers’ races were unlikely to be related.