Have we just seen the future of F1's format? - The Race
Skip to content
Formula 1

Have we just seen the future of F1’s format?

Formula 1’s first two-day world championship event at Imola last weekend proved popular with teams, drivers and fans and strengthened the case for more shortened events to be included on the calendar in the future.

But the future of condensed events remains uncertain as the cases for and against are more complicated than they might superficially appear.

While the rearrangement of the calendar necessitated by the COVID-19 pandemic was touted as an opportunity for experimentation, race weekends have remained homogenised.

“I don’t think we’re doing it here to experiment, we’ve been forced into this situation” :: Alan Permane

The two-day event at Imola was created because of the difficulty of moving the F1 paddock such a long distance by road after the Portuguese Grand Prix, so to characterise it simply as a calculated experiment would be misleading.

“The first thing to point out is that we had to do a two-day weekend coming from Portimao,” said Renault sporting director Alan Permane when asked about the format.

“It’s 2500km for the trucks. It would have been incredibly difficult, if not impossible, to do a three-day meeting here. So that’s why we’re here. I don’t think we’re doing it here to experiment or to try something new, we’ve been forced into this situation.

“For us, if everyone has the same – it favours the better drivers of course, it certainly favours the teams who are better prepared – I don’t think it changes a great deal. The biggest thing is who gets on top of the tyres, and who doesn’t.”

What Permane says is a neat summary of the various competing interests when it comes to future two-day events. But with the 2021 calendar featuring 23 events – COVID-19 permitting – and the rules allowing for up to 25 in the future, two-day events could have a role in mitigating the increasing demand on team personnel.

“There’s not a long time to analyse data and run the simulator overnight. And in that respect, it’s something new and I like it.” :: Toto Wolff

“For the mechanics, it’s a massive task. They travel around the world in less-than-optimum conditions compared to the others. Travelling to a racetrack on a Monday, being there for a week is 23 weeks away from home. It’s at a point where we’re at saturation, we’re almost in need of a second crew.

“Things like a two-day weekend could be quite interesting, particularly in what we expect to be a very busy back end of the calendar. We’ll just have to see and be versatile and open.”

Horner is right that such events are now a viable option particularly given the anticipated instability of the 2021 calendar. F1 must be adaptable.

WOULD IT MAKE F1 MORE UNPREDICTABLE?

There is an argument that reducing the weekend track time would make F1 less predictable.

There is an element of truth to this as the reduced running means there will be more variability in performances thanks to teams having less time to extract 100% from the potential of their package.

Despite support for the reduced timetable among drivers, they too are impacted with less time to get on top of the machinery and finesse their approach even though the loss of three-quarters of the available practice time was slightly mitigated by the track being busier. Mercedes, for example, completed 93 laps in practice compared to a total of 179 the previous weekend in Portugal – so 52% of the running in 37.5% of the time.

“I like it very much, it’s so compact,” said Mercedes team principal Toto Wolff of the Imola format. “Lots of adaptability needed. You just get have to get the car in a good position straight from the get-go.

“There’s not a long time to analyse data and run the simulator overnight. And in that respect, it’s something new and I like it.”

But the argument that less running would hurt the strongest teams is disputed. At Imola, the gap to the fastest non-Mercedes in qualifying was 0.770%, which almost exactly matched the average for the season. The gap to the front of the midfield was 1.2%, which was bigger than on the previous three weekends.

While the time for data crunching and running simulator programmes at base during the weekend is reduced, every team gets the same amount of time so it stands to reason that the best at data analysis and preparation for a three-day event would still be the most effective over two days. There have been disrupted weekends in the past when the order has been shuffled by lost running, but once such formats become the norm their capacity to cause this will be reduced.

“The track time suits us better because it helps us make up for other resources we don’t have. So I don’t think it really helps mix things up.” :: Dave Robson

If two-day events became regular, although there would be occasions when teams hit trouble and don’t have time to recover, it would perhaps even favour a team like Mercedes. After all, it’s F1’s best team for a very good reason.

“It’s hard to know until you’ve done it a few times, but particularly at the moment where you have big teams and small teams and not everybody operating to the same budgets, those with the bigger resources I think it plays into their hands more,” said Williams head of vehicle performance Dave Robson.

“If you have less track time, because they have time and money to spend beforehand on using dynos and rigs and things, they’ve probably got better simulation.

“They’ve probably got a simulator with another well-paid driver running in parallel to the track and they’ve just got more people and potentially more computing power to crunch the data in a short period of time. 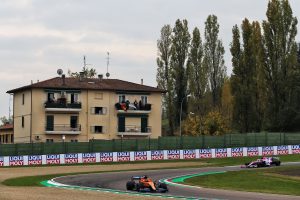 “We’d rather have the track time. That suits us better because it helps us make up for other resources we don’t have. So I don’t think it really helps mix things up.”

Track time is also valuable in terms of testing components. While some teams did squeeze some evaluation of parts into the practice session at Imola, in lieu of in-season testing Friday is an important opportunity to do that donkey work.

That said, this becomes a weaker argument once rules allowing teams only to run in the configuration they submit to in pre-event scrutineering are in place in the future.

WHAT ABOUT THE RACE PROMOTERS?

The character of grand prix Fridays at the circuit fluctuates wildly depending on the venue. While this year fans have only been able to attend four events so far, before the COVID-19 pandemic there were circuits where Fridays felt little different to the behind-closed-doors days we’ve become familiar with this year.

But this doesn’t mean Fridays do not offer value to many promoters as there are also races that draw big crows for practice.

For example, last year’s Australian Grand Prix had a Friday crowd of 84,500 and even has a healthy attendance on Thursday when only support categories are running. Another example is Silverstone, which drew a crowd of 88,000 on Friday in 2019 – and these are not isolated cases. No race that attracts a genuine crowd on Friday would accept a two-day event.

“I think there will be big races, hopefully with a lot of spectators again, where a three-day event makes a lot of sense,” said Wolff. “Thinking about Melbourne and the amount of people there. And the narrative, the content that we can provide around these tracks.

“So I don’t think it’s fit for everybody, but I think for here it works really well.”

There would also be tangential impacts for those races that have support from national or regional government as it would reduce the economic benefit to the area by reducing the length of time extra bodies are drawn into the region. This means that in the case of the majority of races, there would be a negative financial impact of dropping Fridays.

The fans that attend the races must also not be forgotten. While Friday practice on television might hold little appeal for all but the most engaged fans, for those who attend events it’s an important part of the weekend.

WOULD THE BROADCASTERS ACCEPT IT?

While Friday is not as powerful an audience draw as qualifying and race day, it does offer three hours of track time out of a total of roughly six-and-a-half hours (excluding the red-flagged races at Monza and Mugello, race times have been between 79 and 96 minutes this season).

Given TV deals are a significant percentage of F1’s revenue, 38% based on 2019, there is a reluctance to do anything to reduce the value. Even losing track time that doesn’t attract anything like the viewership of qualifying and the race would impact that, not to mention reducing the offering of the F1 TV subscription where it is available.

WILL THERE BE MORE TWO-DAYERS?

F1 has not seen the last of two-day events, but don’t expect them to become anything other than a pragmatic option in future seasons.

Already, moves have been made to condense the weekend by eliminating Thursday as the media day by moving driver press conferences to Friday in future, which will have an impact even though it doesn’t ease the workload on those doing most of the jobs for F1 teams.

But the financial implications of reduced running mean that this is unlikely to be a direction F1 pursues aggressively unless it’s necessary to fit in even more races to give a net gain in revenue. And remember, that revenue is shared by the teams so it’s also in their economic interest to pursue a punishing schedule.

After all, just because two-day events have never been done before by design, it doesn’t mean they are not a valid option for the future.

What happened at Imola is not the future for F1, but two-day events can be a small part of it even if they won’t be viable for many grands prix.