Has Ricciardo made another career error? - The Race
Skip to content
Formula 1

Has Ricciardo made another career error?

Fernando Alonso has, rightly or wrongly, a reputation for career decisions that have led him to the right place at the wrong time. But by forsaking Renault and signing for McLaren, has Daniel Ricciardo’s own misjudgement reversed this narrative by opening the door for Alonso’s comeback with what will be called Alpine next year?

Only Ricciardo knows whether he really has any regrets about a decision made during the COVID-19 induced Formula 1 shutdown, long before the 2020 cars had the chance to turn a wheel on a grand prix weekend. His deal was announced by McLaren on May 14, following hot on the heels of Ferrari revealing it had signed Carlos Sainz. Since then, so much has changed.

Back in May, Ricciardo only had pre-season testing, the experience last year and what he knew about the longer-term direction to go on when it came to judging the viability of sticking with Renault rather than turning to McLaren. Had the season started as normal, he would likely to have had the time to evaluate the upgrades that were ultimately introduced for the new season-opening Austrian Grand Prix, which were originally scheduled to have been deployed over the first six races of 2020.

So let’s cast our minds back to the dark and uncertain days when nobody knew when F1 would get started again. In terms of performance, Ricciardo could look back on an unsatisfactory debut campaign with Renault. The team stagnated and struggled to get the anticipated performance gains out of the upgrades it did deploy. In particular, bargeboard updates did not deliver the anticipated performance. But what proved a developmental black hole last year has been a rich seam to mine this year as recent progress has been impressive.

The extent to which Ricciardo expected this step versus hoping for it it is difficult to judge. Doubtless, his confidence in the team will have been shaken by the previous year’s problems, and pre-season testing was a mixed bag for Renault. While there were some signs of progress and the new Mercedes-style narrow nose was a good change, there was nothing to say Renault had eliminated its fundamental 2020 limitations.

“I definitely think winter testing, the car was a bit better [but] I still don’t think we left Barcelona with a whole chunk of confidence,” said Ricciardo when asked by The Race how the progress in 2020 aligns with his expectations after testing.

“Then the updates we brought to what was the first race in Austria, they made a proper step. Let’s say, in the winter this was probably a bit unexpected but once we got racing, this was the level we expected to see even last year – what we kind of expected to happen 12 months earlier.

“We had flashes of it last year but didn’t show it consistently enough to really believe it was going to get to the level we expected. But now, it’s certainly getting close to that and on all ranges of circuits now, which is the most encouraging thing for the team. Personally, for me to be quick around here [Sochi], I don’t think I ever really have been.”

What is clear in what Ricciardo says is that the team has finally confirmed some of the promise that it used to lure him away from Red Bull in the first place. But could he have afforded to take that on trust after testing? Most likely not, and it stands to reason that the big question mark that hung over Renault’s capacity to get itself together must have contributed to his decision to go.

At 31, Ricciardo is very aware of the clock ticking and he needs to get into a title-challenging machine soon or he never will. Locking himself into a team like Renault at a time when McLaren was showing a clear upward trend and investing in some major infrastructure projects might have felt like a career cul-de-sac.

To add to this, there also remained questions over the future of Renault. While this isn’t unusual with the marque given its history, you can see why Ricciardo might have felt more confident in McLaren’s future. It is, after all, first and foremost a grand prix team and while McLaren does have a significant automotive arm, Renault’s F1 team is a tiny slice of a much bigger organisation and therefore easily cuttable.

And even if Renault was making positive noises given the rule changes under discussion, the lowering of the cost cap and the expectation that the new Concorde Agreement would make F1 more equitable, nothing was set in stone come May.

It might be that Ricciardo saw McLaren as the more definitively upwardly-mobile team, even with the financial question marks that hung over it given it has debts of hundreds of millions of pounds to service. That said, it’s impossible to know how aware Ricciardo was of some of what was going on in the background at McLaren at the time he signed up. While the money isn’t about to dry up for McLaren, it’s legitimate to ask if its ambitious recovery plans might be inhibited by financial concerns.

What we don’t know for sure is what financial terms were on offer. We know what Ricciardo’s baseline pay was for 2019 and ’20 – $25million per season. We know that he’s being paid less by McLaren, but there have been a wide range of figures reported that suggest it’s around 50-60% of that. Whether that’s true is difficult to say, but it certainly will be less. As for what Renault offered him, that’s down to guesswork but given the financial climate it seems fanciful that he wouldn’t have faced a cut to continue there in 2021.

What we can say decisively is that the facts available to Ricciardo were he making the decision today compared to those of four-and-a-half months ago are different. The decision to rebrand as Alpine was presumably not known to him, although there’s differing interpretations about whether that’s a positive reflection on the company’s F1 commitment or not.

But Renault feels like a more credible option now than it did in May. That’s despite McLaren’s on-track performance this season remaining strong. After all, the one race recently where it has defeated Renault was Monza, which was the highest point in terms of pure performance either team has managed in 2020.

We also know there are those within the Renault team who suspect Riccairdo might have made a different decision were he making it given the progress made particularly in recent months – specifically since the set-up change in approach that appeared to unlock a new level of performance over the Silverstone weekend. Perhaps, perhaps not. Even Ricciardo probably isn’t sure of that.

But Ricciardo is still the obvious person to ask. Only he really knows if there are any inner doubts or regrets and the impact, if any, Renault’s recent run of form might have had on them. But with Renault ahead of McLaren three times in the last four races, he’s certainly aware that the equation has shifted slightly.

Ricciardo wouldn’t be foolish enough to voice any concerns if he did have them, but he was quick to recognise the progress that Renault has made and the possibility that he could be pushed very hard by his current team once he moves to his next team.

“It’s no disrespect to Renault and where I currently am, but I don’t regret it,” said Ricciardo.

“Am I happy to see us progress? Absolutely. And if it means we’ve got Renault as a competitor next year to then push McLaren further, then that’s good for everyone. I’m not regretting it but I’m also not unhappy with the progress. I want to be racing at the front and obviously every race in F1 is so important, so every chance I get to do it, the sooner the better.

“So I am glad we’re making progress and I feel a part of it, which is important for me and my growth as a driver. The team haven’t shut me out with anything, I’ve been doing simulator and all of it. It’s been really good to work with them.

“I know [it’s] bittersweet especially for some guys in the team to know that I can’t continue on after this year but I’m going to give it a red hot crack until the last day.”

While Ricciardo’s decision to commit to McLaren did lead to some unhappiness at Enstone, with Cyril Abiteboul apparently not taking the news well, all the signs are that it has been a productive and happy ship once the season started. There’s no evidence of the kind of friction that has been created by Ferrari’s decision to drop Sebastian Vettel, and Ricciardo has unquestionably been one of the stars of the season.

This means that the relationship could easily have continued, in which case Renault would never have needed to sign up Alonso. But it seems plausible any regrets Ricciardo might have are small ones. After all, it’s hardly a clear-cut decision. 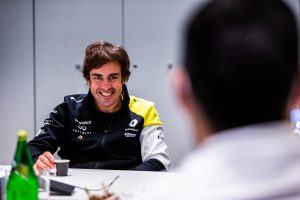 Were you to be a free agent locked out of the big three teams – and we’ll include Ferrari in this for now given its massive potential despite the dismal performance – which would you choose? McLaren has 18 months of positive progress, some major infrastructure projects in the works, a Mercedes engine deal and a pleasing trajectory performance-wise. But it also faces a financial challenge in terms of the debt level.

As for Renault, having stagnated before, the evidence of recent months suggests it’s back on an upward curve and the technical team changes made over the winter won’t have a decisive impact probably until the new car in 2022 given the limited development for next year.

Plus, Renault has already done a lot of its infrastructure spending. But given the Alpine rebrand and the instability inherent in most manufacturers in motosport, there is always going to be a fear of the rug being pulled out from under the team. The recent Honda announcement is a stark reminder of that.

Even now, there’s no clear answer to which would be the better choice – McLaren or Renault. But the stopwatch doesn’t lie and time will eventually tell.

If Ricciardo is still finishing fourth on a very good day and watching Alonso standing on the top step of the podium in 2022, then we’ll know for sure.