Lewis Hamilton says he will not stop using his platform to “shed light on what I believe is right”, in the wake of a controversial response to his Breonna Taylor T-shirt at the Tuscan Grand Prix.

The six-time Formula 1 world champion wore a T-shirt last weekend at Mugello urging action over the killing of emergency medical technician Taylor in the United States earlier this year.

His shirt’s “Arrest the cops who killed Breonna Taylor” and “Say her name” messages, plus a photo of her on the back, were seen in the pre-race build and post-race around the podium ceremony.

“This is a journey for all of us to come together and challenge the world on every level of injustice, not only racial” :: Lewis Hamilton

That drew the attention of F1’s governing body the FIA, but it is understood that a formal investigation was not launched and will not take place.

However, it is believed that guidelines will be amended to clarify what drivers can and cannot do in such scenarios.

Hamilton, the first black driver in F1 and only black driver on the current grid, has used his star power and enormous platform to support anti-racism campaigns and other issues. 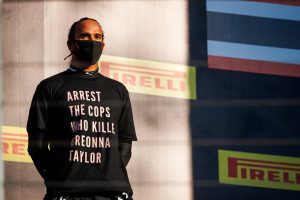 His Taylor T-shirt was an escalation in how he publicises matters of police brutality and discrimination.

Hamilton has not responded to specific criticism but shared a message on Instagram on Tuesday morning that said: “Want you to know that I won’t stop, I won’t let up, I won’t give up on using this platform to shed light on what I believe is right.

“I want to thank those of you who continue to support me and show love, I am so grateful.

“But this is a journey for all of us to come together and challenge the world on every level of injustice, not only racial.

“We can help make this a better place for our kids and the future generations.”

F1 and the FIA have incorporated anti-racism messaging into the pre-race build-up with its #EndRacism and #WeRaceAsOne initiatives.

Where other drivers have worn T-shirts with the #EndRacism again pre-race, Hamilton has opted for one with the “Black Lives Matter” message and swapped that for his Taylor messages at Mugello.

Exactly how the FIA will clarify its guidelines without unfairly censoring drivers is unclear. 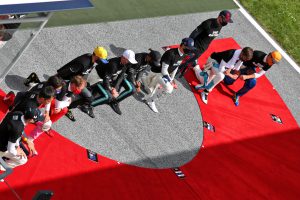 Its statutes do not forbid individual expression unless it is discriminatory, as a rule outlawing political messages only applies to something on the car itself, but the BBC has noted that the FIA is a signatory of the Olympic charter which forbids any “kind of demonstration or political, religious or racial propaganda”.

Last weekend in Italy, Hamilton’s team boss Toto Wolff said his driver should be free to share the message of his choice.

“No question, it’s entirely his decision,” said Wolff. “Whatever he does the team will support.

“The team is fighting against any kind of racism and discrimination, and it’s Lewis’s fight for Black Lives Matter with all the support that we can give.”