Hamilton paid for a 'simple error' - so why didn't Leclerc? - The Race
Skip to content
Formula 1

Hamilton paid for a ‘simple error’ – so why didn’t Leclerc?

Lewis Hamilton had two five-second penalties in the Russian Grand Prix for doing a practice start out of position, a punishment that fit a black-and-white crime according to the FIA. So why didn’t Charles Leclerc get the same at the Belgian Grand Prix?

In the aftermath of a controversial Sochi race day, it’s become clear that while Hamilton was certainly alone in Russia in doing a practice start out of position it’s not the first time this season that’s happened – or the first time the FIA stewards have been aware of something like this.

Just three races ago, Leclerc was under investigation for a pre-race reconnaissance lap infringement at Spa. That was known at the time. The investigation concerned a reconnaissance lap that was too slow. The stewards looked into it, they spoke to the team, the team said the reason for this was that Leclerc had gone beyond the Safety Car 2 line and triggered the timing beam for the lap but was stopped for approximately 12 seconds for a practice start. The stewards checked it, saw that Leclerc did the start as Ferrari said, and cleared Leclerc of any wrongdoing on his reconnaissance lap because it was only too slow because of a practice start.

But what seemed to be universally missed at the time – and a post-Sochi article elsewhere drew the initial comparison – and is now creating confusion is that Leclerc shouldn’t have been doing a practice started beyond the SC2 line.

The SC2 line was the cut-off for where a practice start was allowed at Spa. Like with Hamilton’s offence at Sochi, this was enshrined in the race director’s notes. Therefore the only reason that Leclerc was not punished for his too-slow reconnaissance lap is that he’d done something that contravened another instruction.

As shown at the weekend in Russia, by breaching the out-of-position start element of the race director’s note Hamilton was also in breach of the rule that says you can’t stop in the pitlane (which includes the pit exit road). You’re only exempt from that rule if you are doing a permitted practice start. Applying that logic to the Leclerc situation, by doing a practice start out of position he should not be exempt from the reconnaissance lap being too slow. That’s a second offence as well.

There are inconsistencies here, let alone the fact Leclerc’s out-of-position practice start was never even formally acknowledged as a potential breach. The Race can confirm this was because Leclerc only stopped a couple metres past the SC2 line, and was deemed by the officials to have created no safety issue or sought to have gained a competitive advantage, whereas Hamilton went to the end of the pit exit road and was actively looking for a more relevant place to do his practice start. 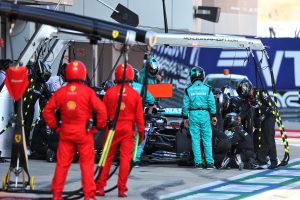 Admittedly, in this situation, you’d always like to see common sense prevail. If the car is not in a dangerous position and there is space for other cars to pass then, why should it be an issue? However, there were two FIA justifications from the Russian GP that mean you can’t apply a common-sense argument to one incident and not the other. Because a hard line was drawn on whether it was a breach or not.

So, whether it’s two metres, or 20 metres, or 200 metres, if you make the safety argument and the potential competitive advantage argument a black-and-white issue, as the FIA did, then it’s a black and white issue everywhere. There’s no room for common sense or flexibility or a subjective view on it based on the specifics of the situation – because it’s been turned into a binary issue.

The other matter alluded to above is that the FIA never formally acknowledged that the Leclerc practice start out of position at Spa. But it hit someone bang to rights for the same black-and-white rule breach in Russia. This is at the heart of a wider officiating concern this season, one of transparency.

Inconsistency is often criticised too, but that’s never going to be eradicated because no two incidents are identical. There is the possibility of getting different outcomes from similar incidents because there are fundamental factors that can be different, even if they’re only subtle. As an aside, that’s also why practice start instructions for one circuit don’t apply to all.

The problem lies chiefly with a lack of transparency, especially when there’s a doubling down on specifics on a different occasion. If we had known what Leclerc was under investigation for at Spa, and why he wasn’t punished, then there would be less of a controversy around Hamilton’s penalty. As it stands now, without a clear answer, it looks like the Leclerc issue was swept to the side while Hamilton got the full force of the stewards’ punishment.

This is not to advocate a conspiracy theory. It is fundamentally a competency issue, which is two-fold: the process is not at a consistently high enough level for an elite competition, and it hurts the trust in that process. 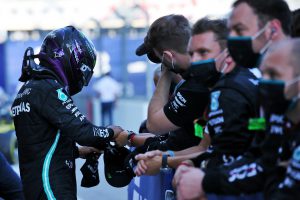 This issue goes beyond the specific case of comparing practice starts. Leclerc – unfortunately the alternative case study again! – didn’t get punished in Russia for hitting Lance Stroll, spinning him into the wall. You may have seen a video online comparing that incident with Hamilton vs Alex Albon in Austria. It was the first lap of the race in Russia, which normally brings about greater leniency – but it was also the first racing lap after a safety car restart in Austria. An incident with the cars bunched together a few corners in isn’t too much of a change in dynamic in those circumstances, so the leniency element should be applied to both.

That’s not a call for a Leclerc penalty, more that neither should have been punished as they were both racing incidents. Yet there was a fundamental inconsistency there. And a key part of the problem is a lack of transparency again. There was no communication why Leclerc wasn’t punished. The stewards cannot investigate everything fully but an incident that puts a car out of the race should be looked at properly with the verdict and reasoning shared officially even if it’s no further action. Otherwise you have all sorts of questions being asked as a result.

This should be a warning to Formula 1 and the rulemakers that the adjudication process needs beefing up. Either infringements are being missed, dismissed, or ruled upon different despite fundamentally similar details without full explanation why – and none of those outcomes are good enough for elite sport.

Unfortunately, we also have a situation occurring at the moment where whenever there is a bit of a conflict over whether the FIA has done the right thing, it creates some friction.

Hamilton went too far with his suggestion that the stewards were out to get him and it was right that he rowed back on that shortly after. Masi understandably responded to that by saying the rules are being enforced with intense rigor and everyone’s being treated equally – but the process needs to be looked at because that doesn’t quite tally.

Masi reduced the Hamilton practice start infringement to a black-and-white issue at Sochi so it is important to understand why Leclerc’s at Spa constituted a grey area. The question is whether the officials will facilitate that understanding.

It’s to the FIA’s and Masi’s credit that he is willing to speak every Sunday evening, and take submitted media questions. But that forum is not always handled in the most effective manner.

Using another example, Masi will not talk in specific terms regarding the Mugello restart crash. After that race itself he rejected the suggestion the safety car procedure played a part in a complicated accident and was done to spice things up, calling it an offensive accusation, and insisted that the safety car lights weren’t turned off any later (relative to the point racing can resume) than anywhere else. But we checked and this assertion was incorrect – our analysis suggests that at Spa, Monza and Sochi, the safety car lights went out around 400, 150 and 300 metres earlier than they did at Mugello.

Now that crash and how to avoid a repeat have been discussed with the drivers officially. But they seem to have been encouraged not to talk about it further. And Masi didn’t give a clear answer at Sochi on how that situation would be handled differently in the future, or address the matter of the procedure. It’s difficult to understand why, unless it’s to avoid publicly admitting that something under the FIA’s control was a contributory factor.

It leaves the picture murky, when it’s everyone’s interests to make it as clear as possible. So while this is a very different issue to Hamilton at Sochi vs the phantom practice start from Leclerc at Spa, it’s just another example of the FIA officials being at risk of being undermined.

The first step to solving this, surely, is to acknowledge stewarding should be a full-time occupation. Professionalise the process. They are referees, after all, and other sports with the necessary resource treat that with the respect and commitment the role demands. As it stands the FIA picks from a rotating pool of stewards, for whom this is not a full-time job.

The lack of absolute knowledge and peak professional standards leads directly to various problems we’ve seen this year, and before, with the practice-start controversy just the latest example. How can one trust an adjudication process that is amateur in occupation and, deliberately or not, shrouds itself in mystery?

This issue should not be reduced to accusations of conspiracy or bias. Instead, it’s a concern that the stewards are not as on top of matters as they should be, and a lack of transparency is exacerbating the issue. Given it governs elite competition, that’s not a great deal better.

A clever innovation that appeared on a midfield Formula 1 car recently wasn't game-changing on track, but will definitely have caught rivals' attention

After months of citing valid contracts for 2023, it's become clear that McLaren does want to find a way to get Daniel Ricciardo out of its Formula 1 line-up and slot in Oscar Piastri instead. Here's a video recap of the state of play with its plan

Szafnauer thinks Alonso’s moving down the grid. Is he right?

Otmar Szafnauer reckons Alpine will be ahead of Aston Martin for the duration of Fernando Alonso's time there, but which of the two F1 teams is most likely to deliver on the promises they've laid out?