Lewis Hamilton overcame a penalty for colliding with Formula 1 title rival Max Verstappen to win an eighth British Grand Prix, taking the lead from Charles Leclerc with just under three laps to go.

Having been fastest in qualifying on Friday night but lost the lead of the sprint race to Verstappen at the start, Hamilton made the better getaway in the main event and nosed ahead towards Abbey.

Verstappen kept enough momentum to hold the lead, then rebuffed another big Hamilton attack into Brooklands by braking ultra-late on the inside. 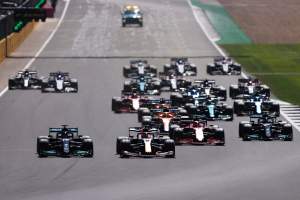 Hamilton got another run approaching Copse and went to the inside, but contact between the Mercedes’ left-front wheel and the Red Bull’s right-rear fired Verstappen into the barriers and what the team called a 51G impact.

That led to a red flag due to barrier damage, with Verstappen getting out of the car unaided before going to hospital for precautionary checks. Hamilton was deemed to be at fault and given a 10s time penalty.

Leclerc had got past Valtteri Bottas off the line then slipped through into the lead as Hamilton slewed wide immediately after the Verstappen contact.

The Ferrari therefore took the standing restart from first place, and held the advantage.

Hamilton stayed close, but towards the end of the opening stint he began to fall away from the Ferrari, reporting that his tyres were fading.

He was over 2s behind Leclerc when he pitted on lap 28 of 52 and took his penalty.

Hamilton comes into the pits, takes his 10-second penalty and comes back out in P5#BritishGP 🇬🇧 #F1 pic.twitter.com/Jhj8CjY3Js

That dropped Hamilton to a net fourth, and left him 14s behind Leclerc.

Bottas had lost another place at the restart so spent the first stint behind Lando Norris.

A slow stop for the McLaren swapped them around, so it was Bottas second and Norris third as Hamilton began his recovery charge.

Norris was passed with an easy move at Copse, and Bottas was then ordered to let Hamilton through with 11 laps to go.

That left Hamilton 8.8s behind Leclerc, and he began to close that gap by as much as a second per lap.

Once with Leclerc, he attacked at Copse once again but the Ferrari appeared to have hung on, only to run wide mid-corner and let Hamilton through.

The win – Hamilton and Mercedes’ first since the Spanish GP in early May – reduces Verstappen’s championship lead to eight points.

Leclerc and Bottas completed the podium ahead of Norris, with the second McLaren of Daniel Ricciardo resisting race-long pressure from Carlos Sainz for fifth, albeit helped by a slow pitstop for the Ferrari. 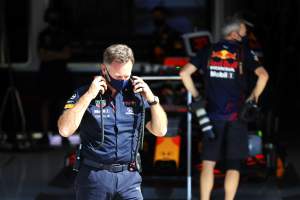 Having started from the pitlane after his sprint race spin, Sergio Perez twice made it into the top 10 only to pit and drop down the order.

The first time was a tactical stop, the second appeared to be an effort to take fastest lap and ensure Hamilton didn’t. Perez finished 16th.

After his Friday heroics, George Russell could only finish 12th for Williams.