During Formula 1 pre-season testing, Haas was slowest of the 10 cars with a best lap a second behind ninth-fastest Aston Martin. With no in-season development planned and expectations for 2021 not so much managed as obliterated, Haas is in for a long, hard campaign.

Even the pace comparison from testing is flattering given Sebastian Vettel’s turbo problem on the final afternoon meant that Aston Martin missed the best of the conditions, during which Nikita Mazepin set what is reckoned to be a reasonably representative time. But as always we will get a more fair indication of the performance gap during the Bahrain Grand Prix weekend.

Having been part of Formula 1’s ‘Class C’ last year with Alfa Romeo and Williams, finishing ninth in the constructors’ championship, there is the very real risk that Haas will be cast adrift in 2021.

Having scored points only twice last year, through Kevin Magnussen’s 10th place in Hungary that was assisted by a formation-lap switch to slicks and Romain Grosjean’s ninth at the Nurburgring, hopes even of opportunistic points are tempered. Even matching last year’s six Q2 appearances appears optimistic.

“A depressing as it sounds, during the test we were able to feel and see how our car compares to others on a race distance and it was pretty difficult,” said Mazepin in an interview broadcast on Russia’s Match TV.

“For the start of the season, I make a less optimistic prediction that we’ll be fighting together with my team-mate, and after that we’ll try to finish as high up as possible.” 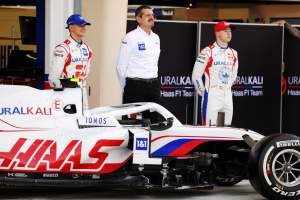 Any hopes that might have lingered for a few relatively good results appear to have been dampened by the experience of testing. As team principal Guenther Steiner put it in Haas’s pre-Bahrain Grand Prix press release, “if we can get a point or two at some stage, that would be a fantastic result. But we are realistic, and points will be hard to come by”.

The emphasis is on getting through the season while building for the future. While the rhetoric is that it’s not given up on 2021, and it’s true that that the team will do everything it can to extract what performance there is in the car, the real focus is on the 2022 car.

This is a pragmatic strategy given the opportunity next year presents. The major overhaul of the technical regulations coinciding with the newly-introduced cost cap and the more equitable distribution of the share of F1’s revenue shared among the teams to create what can legitimately be seen as a new era of F1. In particular, an era in which a team like Haas, which is dependent on non-listed parts supplied by Ferrari and aero work overseen by Dallara, will hope to be able to aspire to be more than just a midfield contender.

Gene Haas has fuelled concerns about his long-term commitment with a number of public statements on the F1 project. This means next season will either be the zero point for his renewed determination, or perhaps that of a new owner.

The 2022 car will also be a more fair test of the quality of the technical team at Haas and Dallara, especially given upgrades designed for last year’s car were never built, few of which could be carried over to this year owing to the aero reg changes. Even with full commitment on 2021, results would be difficult to come by, so effectively sacrificing the season is the logical play.

While off-track 2022 is the priority, on it the focus is on getting its all-rookie line-up of Formula 2 champion Mick Schumacher and the problematic Mazepin up to speed. Both completed a decent number of laps in Bahrain testing, with Mazepin lodging 213 laps – the third-highest total of all – and Schumacher 181. As Steiner puts it, the main aim of testing was for “as much seat time as possible” for its two rookies.

That said, the Haas VF-21 isn’t identical to its predecessor. As well as the necessary changes required to comply with the 2021 aerodynamics regulations, the car features revised rear bodywork. During testing, modifications appeared to the front wing and the under-nose detail with a cape added. But while this is more than the bare minimum, with Haas the decision not to spend its two permitted upgrade tokens proof that this year can ironically be called a token effort.

Although the inexperience of Schumacher and Mazepin is a weakness, this will be a distant second to the car performance when it comes to what risks being a pointless season. Given Grosjean and Magnussen, both proven F1 drivers with podium finishes to their name, managed just three points last year and 2021 is potentially a more hopeless situation, expectations must be set accordingly.

This is a transitional season for all 10 F1 teams, but none more so than Haas. While on-track it is going to be an irrelevance in the majority of races, what happens off-track will shape its future.