Grosjean: Bahrain Outer race could be a 'nightmare' - The Race
Skip to content
Formula 1

Grosjean: Bahrain Outer race could be a ‘nightmare’

Romain Grosjean believes the Bahrain Outer circuit layout could cause a “messy” qualifying and create a “nightmare” for backmarkers when Formula 1 races on the track at the Sakhir Grand Prix this year.

F1 announced on Friday that the second race in Bahrain this season would be on the perimeter circuit, which is expected to produce a pole position time under 54 seconds because the layout is so short and made up of so many straights.

Grosjean, one of the directors for the Grand Prix Drivers’ Association, said he wasn’t against the idea of trying new things, but believes F1 may need to look at some rule tweaks to prevent qualifying and the race getting out of hand.

“I don’t want to speak too soon because I think trying it is a good idea,” Grosjean told media including The Race at Spa on Saturday.

“Personally I’m not fully convinced. I don’t know what we’re going to do in qualifying.

“We made a calculation – if you want to evenly space every car on track it’s 175 metres between each car. It’s not going to work. 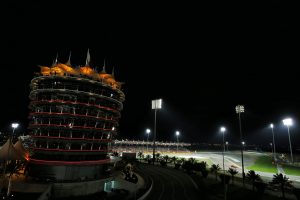 The best leftfield track yet? Our verdict on oval-style Bahrain
Read more

“We need four seconds for a good tow but not dirty air. So first of all I don’t know how quali is going to turn out, it could be tricky.

“But, hey, I accept the idea, let’s try it, maybe it will work, maybe it will not work, I don’t know. But it may be that we need to make a few tweaks in the rules because as I say qualifying, slow laps and so on, it could get really messy.”

Grosjean also raised concerns about blue flags for backmarkers around such a short lap, and said he plans to discuss ideas to tackle the unique problems posed by the layout with fellow GPDA director Sebastian Vettel and the group’s chairman Alex Wurz.

“It could be a bit of a nightmare. I think I will have a call with Alex and probably Sebastian in the week for the GPDA and discuss and try to come up with our idea, our view, and maybe discuss it with Formula 1.”

Grosjean said the GPDA was not consulted before F1 decided to use the new layout, and he would have preferred a daytime race on the usual circuit used for the Bahrain GP.

“For us the fun is in the corners, and there aren’t that many,” he added.

“So if you ask me, I would have much preferred to have one race on the normal circuit in the day, at 2pm, when it’s really warm, and [face] issues with temperature, and another race in the night like we normally do.”