Gary Anderson's verdict on McLaren's 2022 F1 design - The Race
Skip to content
Brought to you by Aramco
aramco.com/poweredbyhow
Formula 1

After the stuttering start to Formula 1’s launch season, McLaren has provided us with the second consecutive car reveal that actually showed a real car.

McLaren has been on the up for the past three years and these new regulations give it the chance to take that next step. So the McLaren-Mercedes MCL36 is an important car for the team’s ongoing revival.

Before we get into the detail, now we’ve seen several launches (I’m not including the Red Bull show car in that) it does seem that compared to the cars we had in previous years they are aesthetically a major step in the right direction. Only time will tell if they actually achieve the objective of making the racing close on track, though.

McLaren is also the first to go off the beaten track by switching to a pullrod front suspension. And unlike the Aston Martin renders, it seems it does have pullrods available! 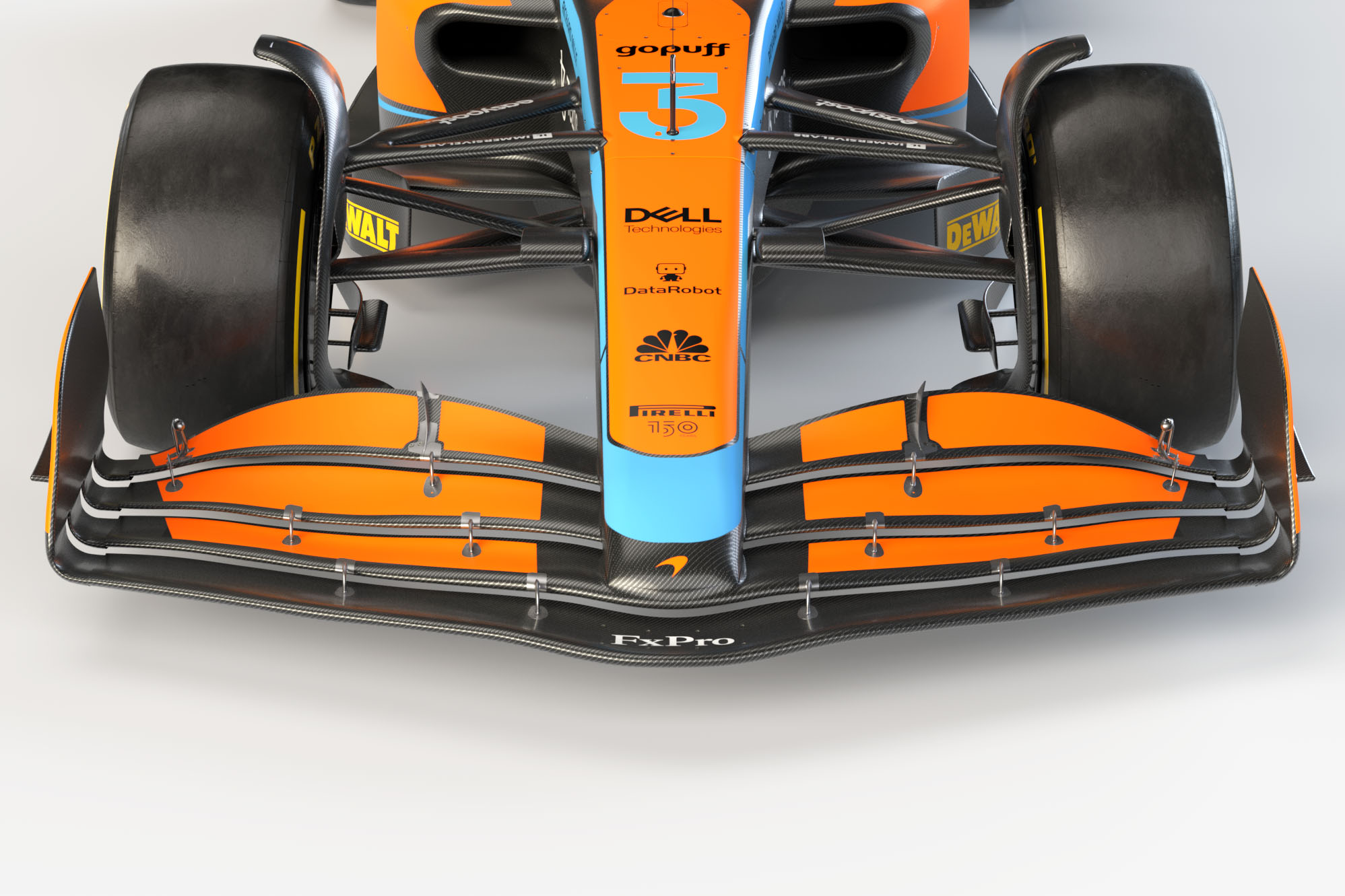 This is incredibly similar to the Aston Martin design. McLaren also uses the first element as more of a flow conditioner with a relatively short chord then has the second element that mounts the assembly onto the underside of the nose.

It’s interesting that two teams come up with nigh-on identical solutions this early into the process of defining a new car to new regulations.

The central section and the first element don’t look quite as high as on the launched-specification Aston Martin. However, the undersurface of the second element sweeps into the under surface of the nose, so again it’s very similar.

The nose itself has quite a small cross section in the area behind the front wing endplates and in front of tyre. I would imagine it took a reasonable effort to get this design through the crash test.

It is again like the Aston in that it is a simple surface with no clutter. The second flap of the front wing mounts to the underside of the nose, as does the inner section of the third and fourth elements, which leaves the middle section of the fourth flap adjustable to alter the balance.

This is the first car we have seen using a pullrod front suspension since Ferrari in 2015.

The regulations with the slightly lower chassis at front-wheel centreline and the 18-inch rims have opened the door to exploit this and not have stupidly shallow angles on the pullrod. With this, all the inner suspension components will be mounted much lower giving an overall lower centre of gravity.

The reality is that 90% of the car is all about aerodynamics, especially this early in the airflow field. So anything that can be done to optimise that air flow is critical to how the rest of the car will work. If McLaren has found that the pullrod solution is best aerodynamically, then it will outweigh any mechanical potential.

The brake duct inlets are very small, but this is a changeable item and with the bigger discs the actual cooling requirement will come from circuit testing.

As with the other cars released, the ducts sweeps into this ‘mudguard’ that covers the upper inner corner of the tyre. 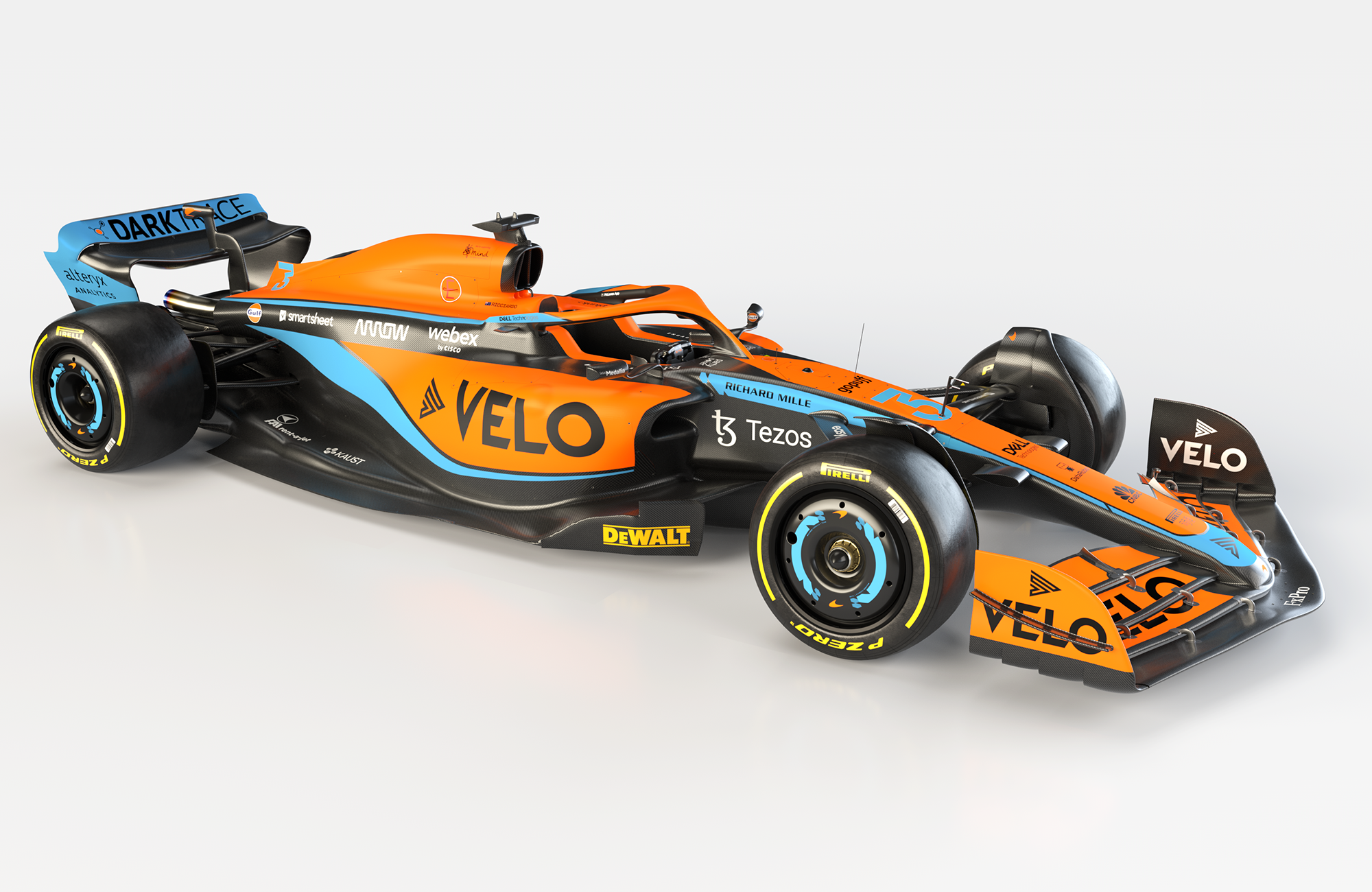 The outer turning vane that sort of replaces the old bargeboards is a lot shorter than what we have seen on the Aston Martin – or indeed the F1 show car.

It is there to separate the tyre wake from the underfloor as effectively as possible, so I’m a little surprised that it is as long as possible and closes off the gap between the sidepod outer corner and the front tyre inner rear corner.

It has an aesthetically-pleasing high inlet which seems to becoming the de rigeur under these regulations.

There is a deep undercut below the red inlet, leaving an opening between it and the top surface of the floor. But then it all starts to be a bit different. 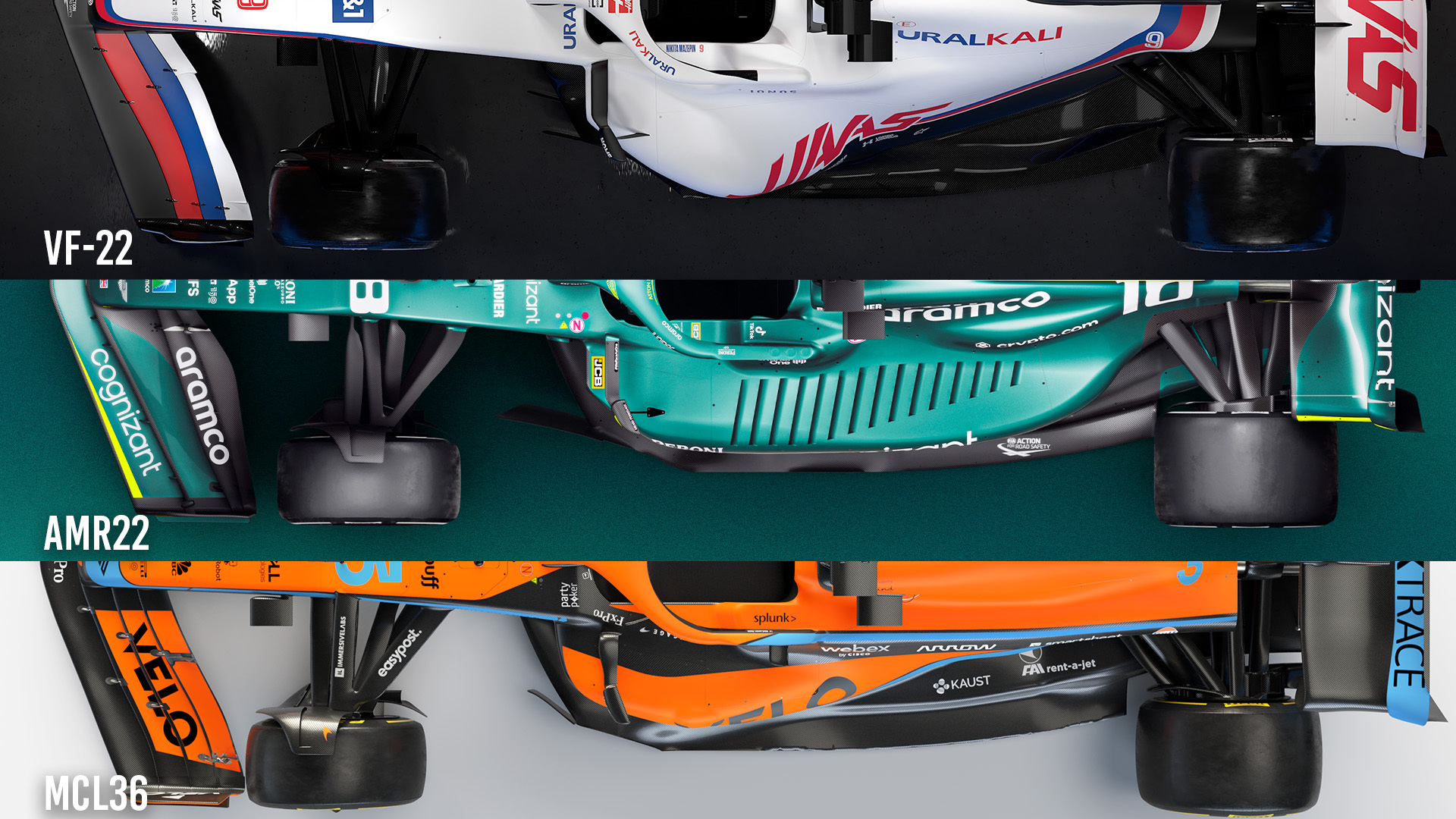 McLaren has gone for the more conventional limpet-style bodywork wrapped as closely as possible around the inner components. This minimises the cross-sectional area of the car as quickly as possible.

It means that instead of that leading-edge undercut continuing along the car, allowing the airflow to pulled through that undercut from the rear of the car, you are now pulling the airflow down in and around the sidepod area that covers the radiators.

Only time will tell who has gone for the best solution to this requirement of getting as much airflow over the diffuser upper surface. 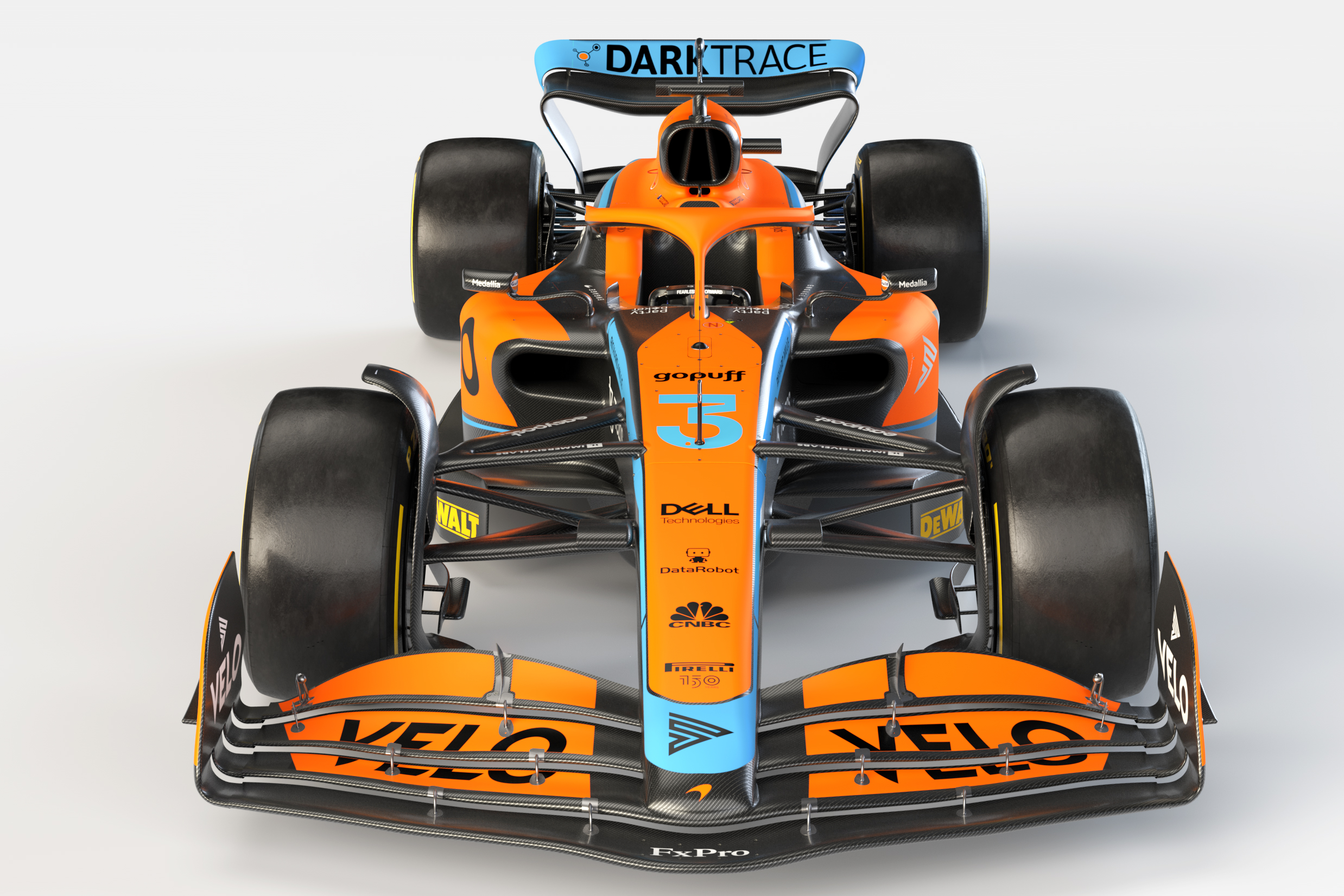 There’s no major change in this area. Overall, McLaren has gone for as low a centre of gravity as possible and because this area is mainly the primary roll over bar, it is very easy to lose sight of the fact that trick designs can very easily add weight very high up on the car. Its size will allow the airflow the turbo requires plus a little for cooling.

McLaren doesn’t have as big an undercut between the headrest and the lower section of the inlet, so needs to be careful that when the turbo can’t take all the airflow presented to it and it spills around the sides that it doesn’t generate turbulence and affect the rear wing performance.

There’s none of the body upper surface louvres that the new regulations for 2022 allow.

We don’t have a rear-end shot, so we have to assume that the radiator exit is at the rear of the bodywork, which to achieve the exit area required means that the Coke bottle opening will be affected. 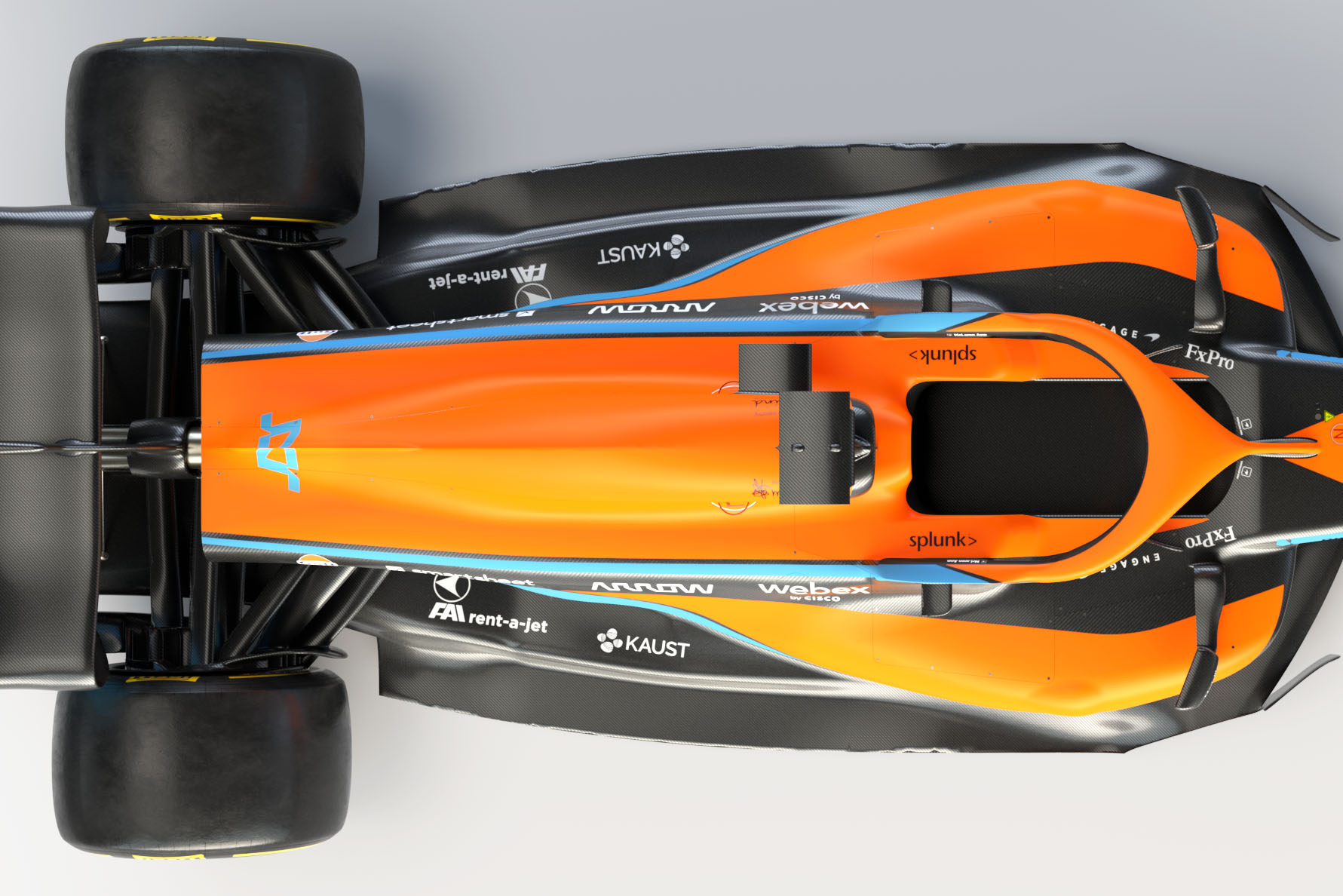 As we can see in plan view that the bodywork at the rear axle is fairly wide.

The bodywork will undercut closer to the car’s centre line and this will open up the diffuser’s top surface. With the diffuser now producing a much bigger percentage of the overall cars downforce this area will be critical to its performance.

Interestingly, McLaren has opted for a pushrod rear suspension.

This confuses me a little, as for many years the pullrod system has been the choice of all of the teams. If you have it and it works, why change it – especially as the philosophy at the rear of the car is very similar to the last 10 years. 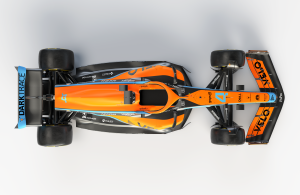 Sometimes it is easy to get far too excited about change when you need to be disciplined and leave well enough alone. Going to a pushrod system clutters up the upper area of the gearbox and it raises the car’s centre of gravity. So my question would be which part of this is a positive? I personally can’t find any.

You want to maximise the flow over the diffuser’s upper surface to improve the diffuser’s performance. Yes, we now have ground effect but we have always had that to some degree.

With no real pictures of the rear of the car to study, it’s fairly difficult to comment on the detail at the back.

The rear wing has its DRS actuator mounted in the middle of the wing and the main wing support is a singlet central strut. I can only assume that it has all the other downforce contributing components like double element beam wing, diffuser and diffuser vanes etc.

The Aston Martin and the McLaren are fairly different concepts, especially in how they are treating the airflow around, under and over the sidepods.

We still are yet to see what the frontrunners have to offer, so I wonder what they are thinking about what they have seen so far this week?