The big technical talking points so far this year are sidepod designs, vortices, porpoising and the impact of those things on performance. Ferrari and Aston Martin are probably at the extreme opposite end of the spectrum both in terms of concept and performance.

The sidepod design and performance, or lack thereof, are related. But the question is whether it’s possible to fix this without a complete redesign. It is, but it might be tough to do so. 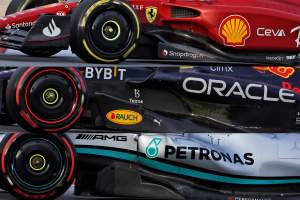 When the Ferrari was launched, I said I didn’t understand its sidepod design as it didn’t appear to ‘join up’ in the middle.

In my defence, to some degree neither did eight other teams because, save for Haas, everyone has gone for a more ‘connected’ and flowing design.

In total, that’s probably the judgement of something like 800 people spread across those teams that could influence the sidepod design. But now I have a better understanding of what Ferrari was trying to achieve, successfully it seems. 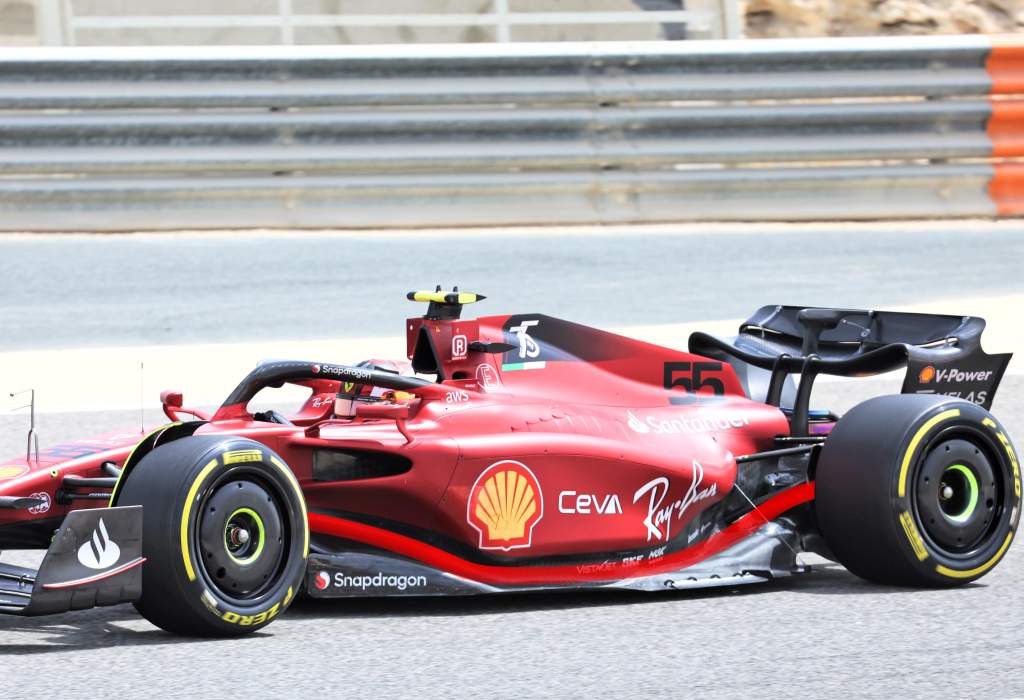 To illustrate this, we have ‘cut’ a horizontal section through the Ferrari and the Aston Martin in the undercut area (red line). 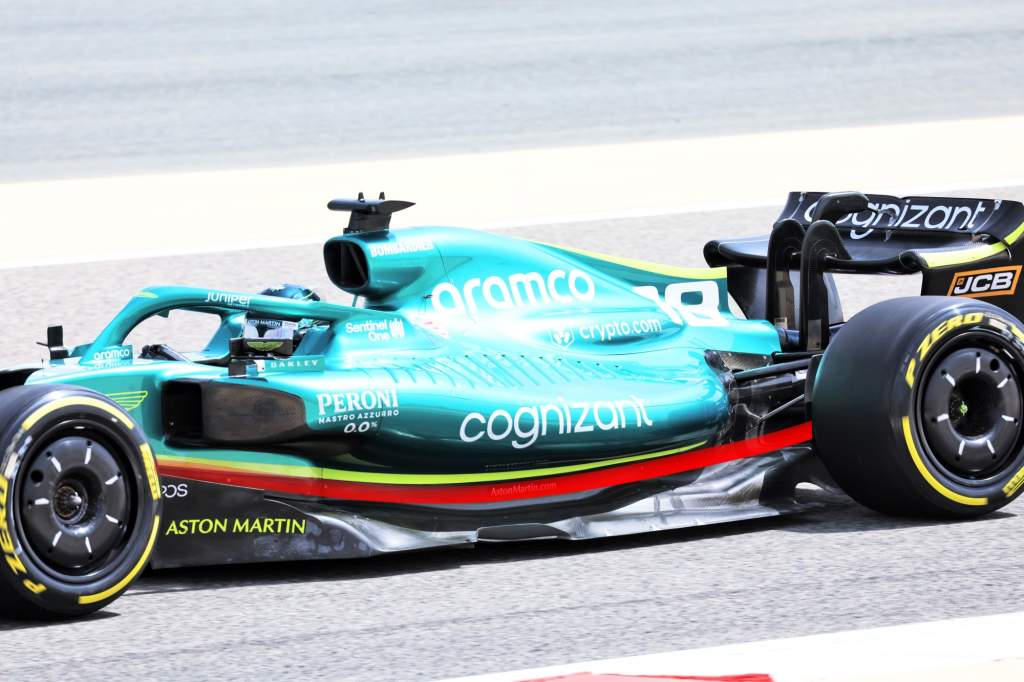 This profile is pretty close to the sidepod undercut outer surface. It is looking down on the car, so you can see the floor profile, the rear half of the front tyre and the front half of the rear tyre.

Ferrari has a sidepod leading-edge design that generates much more outwash than Aston Martin. This is indicated by the blue arrows. 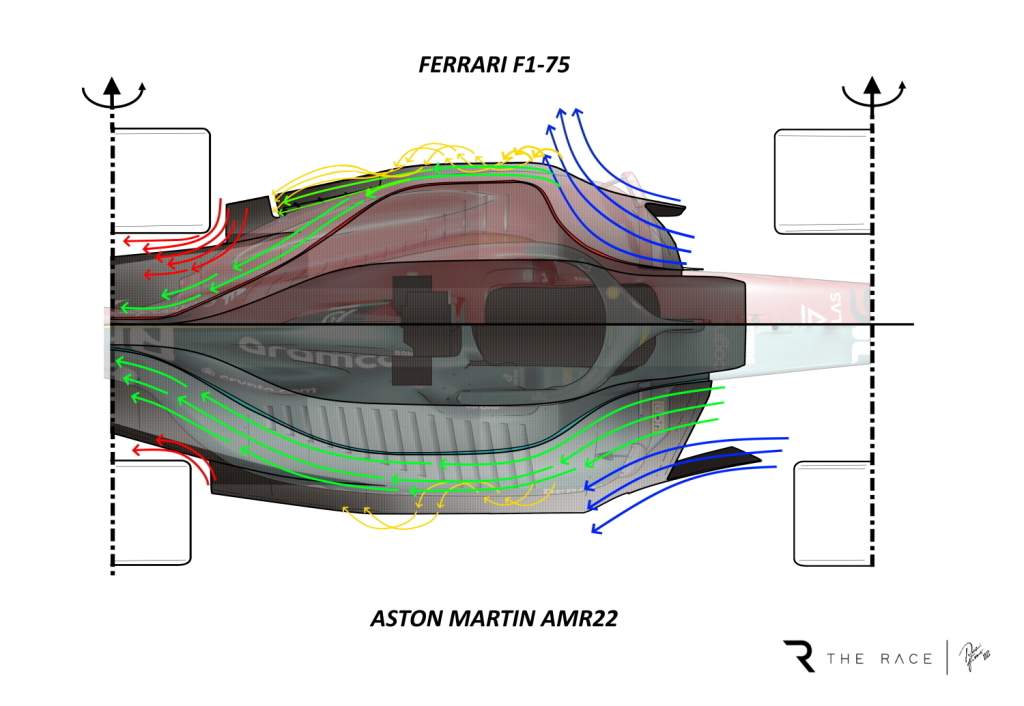 Other teams, except perhaps Haas (interestingly given its Ferrari links), have varying degrees of outwash, but no one has as deep an undercut running through the sidepod from front to back as Aston Martin.

The Ferrari sidepod and underfloor leading edge is further rearward than on the Aston Martin, giving a little more space between it and the rear of the front tyre. This will reduce the effect of the turbulent wake behind the front tyre.

Also, Ferrari’s outer splitter – or bargeboard replacement vane as it can be called – is much shorter. This means that the inlet to the underfloor is not so defined.

If this vane was to be able to run forward to the trailing edge of the tyre, its position would be critical. Leaving a little more space allows the airflow being fed to the underfloor to sort itself out and it will be less critical when the steering angle is increased for slow corners.

What ‘sorting itself out’ means is that these areas are all working at different pressures, be it the flow going under the floor, through the sidepod undercut or even into the radiator duct.

If you define it too tightly then you are modifying that flow and when conditions change – due to turbulence from another car, a crosswind or just the front wheels being steered – then one of these areas will suffer and that can cause problems. If it’s the flow to the underfloor because of the steered front wheels, it can easily lead to understeer.

Because of this, Ferrari generates a much stronger vortex running down the side of the floor (yellow arrows). Aston Martin still generates the vortex but is more reliant on sophisticated turning vanes setting them up than the true brute force of the outwash.

Ferrari also has a cutout on the floor to allow the tyre squirt, which is being forced around the side of the tyre as it rotates onto the track surface, to pull those vortices into this opening. This gives a small cushion of air between the outer foot of the floor further rearward and the track surface, reducing porpoising.

The Ferrari sidepod doesn’t have much of an undercut at its widest point (green arrows), whereas the Aston Martin has a very deep undercut. Some people even called it a double floor when it was first released.

The Aston Martin solution means it has much more front-to-rear flow through the undercut area of the sidepod. But that is where I think one of its problems lies.

As the rear wheels rotate onto the track surface, the air is displaced around the outer and inner side of the lower part of the tyre sidewall. This also happens higher up (red arrows) as the tyre itself forces its way through the air. 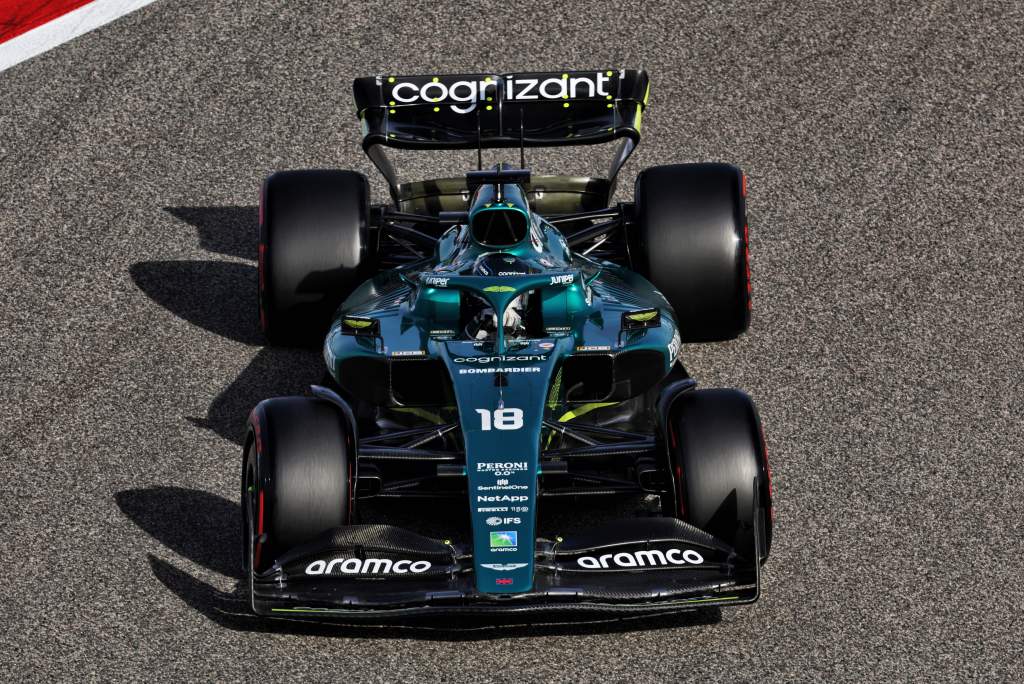 This airflow has a lot less energy than the flow that is displaced by the tyre squirt. However, the more you can direct the airflow around the inside rather than around the outside of the tyre the better, as there are some very aggressive turning vanes on the inside surface of the rear brake ducts.

These generate load directly onto the unsprung side of the suspension and in turn the rear tyre contact patch without going through the suspension medium. So when the car is moving upwards during braking, other than the reduction on load because of the reduction in speed there is no effect on this load as it is going directly onto the rear tyre contact patch.

With the Ferrari not having as much of a mid-car undercut and its Coke bottle area opening up later than on the Aston Martin, it pulls more of the flow that is being displaced by the rear tyre inwards, getting more load directly on the rear tyre contact patch.

Ferrari’s gully in the top surface of the sidepods also reduces the flow that would normally spill over the top outer edge and down into the Coke bottle area. If this was allowed to happen, it would effectively be reducing the low pressure in the Coke bottle area that is helping to pull that airflow off the front of the rear tyre. 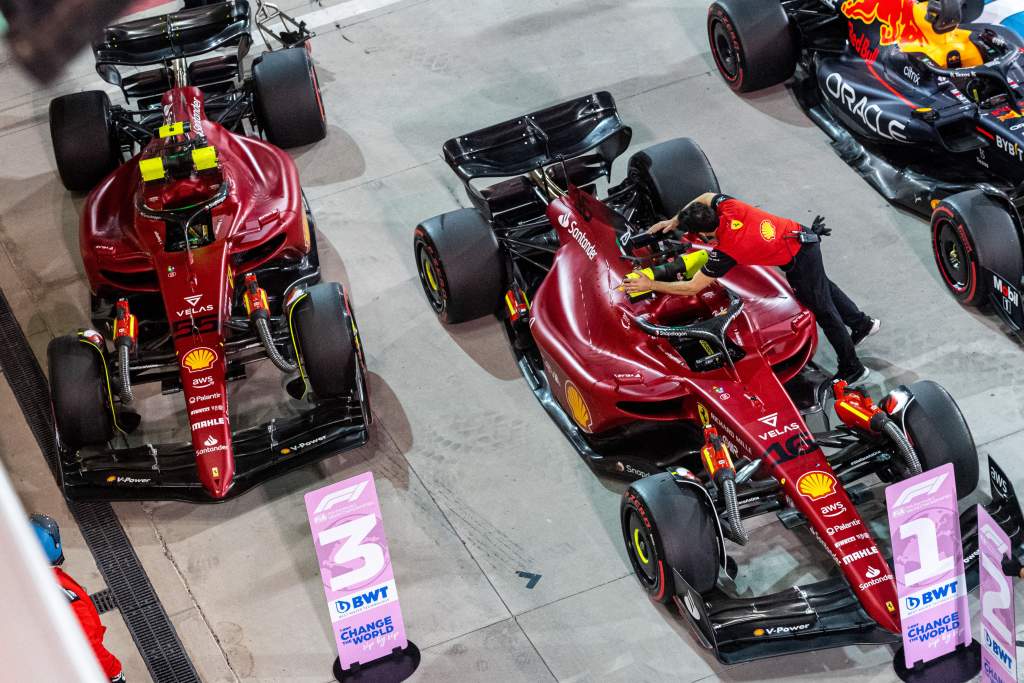 Aston Martin technical director Andrew Green has said the team believes it’s losing as much as three quarters of a second by having to raise the rear ride height to reduce porpoising, porpoising is set off by the car getting close to the ground which only really happens at high speed when the aerodynamic loads are at their highest. 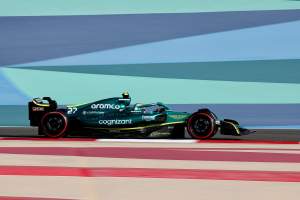 Aston Martin losing over half a second to porpoising
Read more

That is plausible, but he has also said that the changes required are all invisible in the ground effect area. Again, that’s very plausible but I suspect the over-body flow and the underbody flow go hand in hand, so the solution to its problems is not found in just one area.

The track in Saudi is a higher-speed track than in Bahrain but the end of straight, or at least near the end of straight, loads will not be that much different. These cars more or less reach terminal velocity at most tracks so the downforce you can generate is more about the drag level you can run to achieve those top speeds. The maximum speed will be higher, but the loads at max speed won’t be much different.

The big surprise could be if you need to generate lateral forces when the car is suffering from porpoising. On a track with walls as close as they are in Saudi, it could definitely get your attention fairly quickly. 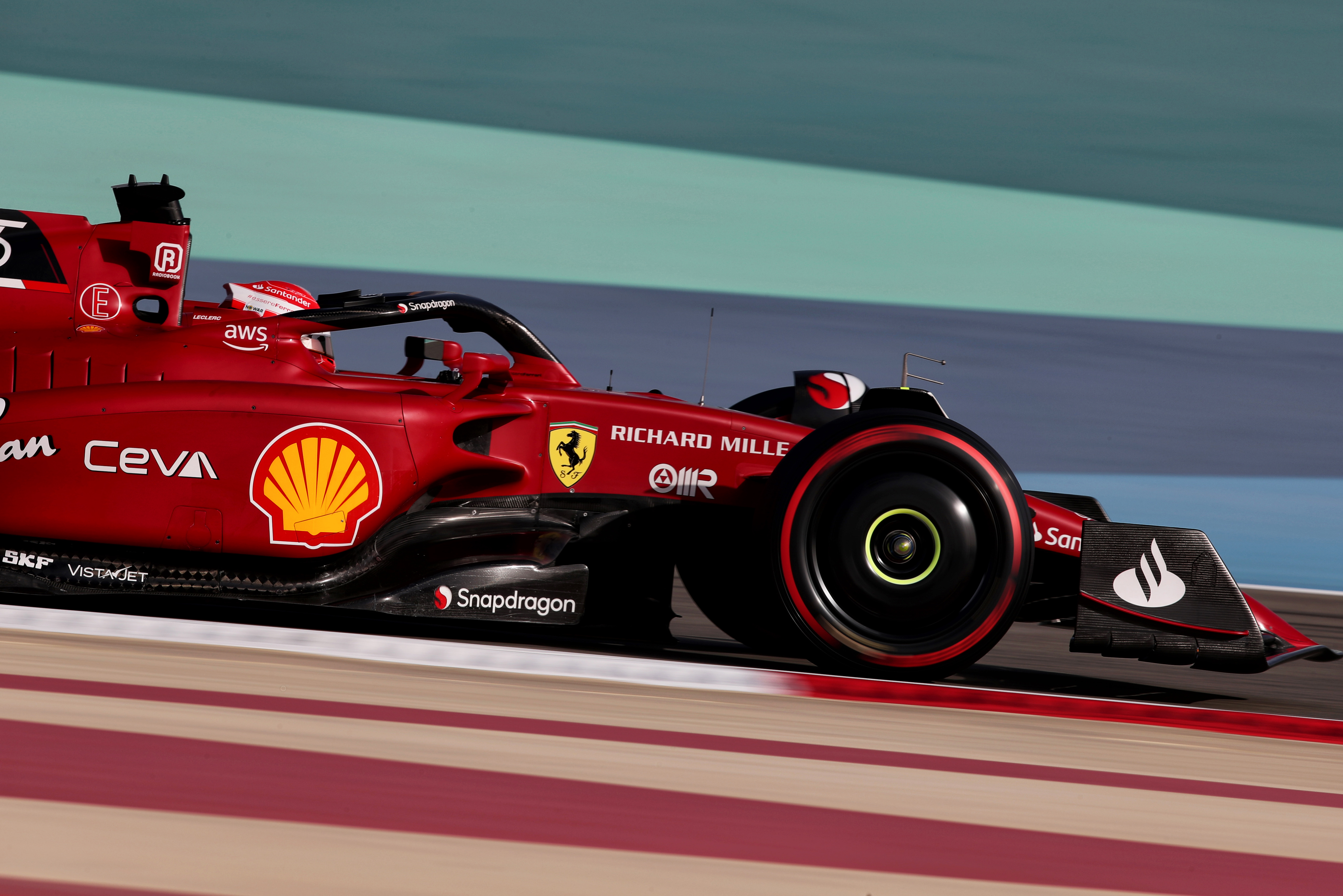 Will others head down this route? I do think they will but not quite in so visually dramatic a manner. I’m pretty sure there will be a few evaluating this approach for future development direction, and with Mercedes being one of the outliers as far as its approach to sidepod design is concerned, it will be interesting to see which direction it takes.

It may not have made sense at first, but all you can say about this sidepod concept is ‘forza Ferrari’.