Post-race fuel samples have been required for many years in Formula 1 and Sebastian Vettel’s exclusion from second place in the Hungarian Grand Prix – still provisional subject to Aston Martin’s planned appeal – is far from the first time a team has fallen foul of this rule.

Judging how much fuel you put in the tank for a race in changeable conditions is always difficult because you can’t be sure how the weather will pan out. Ensuring you have the extra that you include to cover the mandatory one-litre fuel sample, or even more importantly to cover the potential for a race when you are running more competitively or harder than you envisioned, is a delicate balancing act because every bit of excess fuel you put in costs you performance across the whole race.

Potentially, this is what happened to Aston Martin, with Vettel running second for the majority of the race and continually building up energy to have a run at overtaking Esteban Ocon.

While the team is confident there was enough fuel in there for a sample – 1.4 litres by its calculations – I suspect the fuel usage simply got away from it that little bit each lap.

It doesn’t take much over a 70-lap race to burn up that extra 0.7 litres that was found to be missing for the required sample post-race.

Both George Russell and Nicholas Latifi were required to give fuel samples having stopped their Williams on the run to Turn 1 after the chequered flag and managed it, so it’s the same for everyone even if you have to stop on the slow-down lap – as Vettel did. But he didn’t stop until Turn 12 after already suffering from fuel surge for a couple of corners, indicating that if the fuel was in there the pick-ups weren’t getting it cleanly.

If Aston Martin can come up with a reason for this lack of sample, then all well and good, but I wouldn’t hold my breath. It would need to be a malfunctioning fuel pump or something way out whacky to build a case, and even then the FIA doesn’t have to accept it.

The regulations don’t allow you to go into the fuel tank searching for fuel and the one-litre sample has to be available on request through a dry-break coupling mounted on the fuel tank access hatch. So I’m afraid in reality it’s a slam dunk. We’ve seen plenty of drivers fall foul of this in the past, perhaps most significantly when Lewis Hamilton lost pole position for the 2012 Spanish Grand Prix because of it. 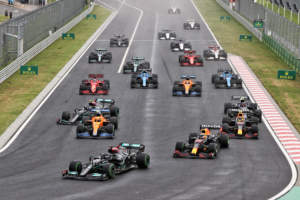 I have always thought that these fuel sample regulations, along with any post-race scrutineering requirements, are wrong. It wouldn’t be too difficult to take a sample from each car before they head for the grid. That could then be used to test against the provided sample to assume the fuel is of the correct specification.

In IndyCar, the cars are passed legal to race and the driver that crosses the finish line first is the winner. There were other cars out there on Sunday with damage that wouldn’t have complied with the bodywork regulations, but as this was accident damage it’s deemed as acceptable.

So perhaps it is time to update the regulations. But that said, Aston Martin knows the rules and if it cannot find some way to prove to the FIA that something happened that justifies waiving the penalty, then that’s that.