The pre-race tyre gamble that vaulted Haas up the field in Hungary ultimately led to penalties for breaching Formula 1’s strict regulations on formation lap communication. Our expert Gary Anderson makes his opinion of it very clear in his latest column

The penalty that cost Haas some of what it gained with a sharp call to pit both Kevin Magnussen and Romain Grosjean for slicks before the Hungarian Grand Prix is a ridiculous one.

It’s a rubbish regulation that is destroying the chance for anyone to get a jump on anyone else, which given the whole point of Formula 1 is that it’s a competition between drivers and teams is absurd.

We talk about wanting good racing but too many times we have stupid, over-complicated, regulations that don’t make any sense

The rule Haas has breached is Article 27.1, which says “the driver must drive the car alone and unaided” but a separate technical directive restricts communication on the formation lap to messages on safety matters.

This is another case of having too many rules, which is bad for F1. This technical directive is all about stopping drivers having coaching about tyre warm-up or the start but a discussion about conditions and a tyre strategy should be exempt from that. 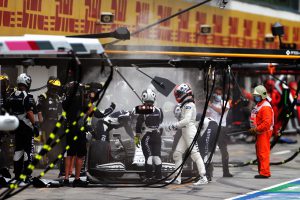 Plus the data that comes up on the dash to give the driver information about clutch bite points and their temperatures is all derived from algorithms generated by the team not the driver, so is this not assisting the driver? It’s not all about verbal communication.

Taking this rule to its logical conclusion, I suppose this now means that if a driver is starting from the pitlane for whatever reason that the team is not allowed to speak with them while the other cars are on their warm-up lap. That’s happened since this directive in 2017 was issued but no one did anything about it.

Unfortunately, as the FIA has said, the tyre call Haas discussed in Hungary is not among the exemptions so the stewards are forced to go with the rules as written when they probably want to be sensible and let it go.

This is the sort of rule that seems to exist simply to justify someone’s existence and if the rule had existed when I was there on the pitwall I would probably have broken it on many occasions.

Discussions about conditions and the possibility of a tyre gamble are all part of the sport – and remember this is supposed to be a sport. Do we really want to stop this happening?

Daniil Kvyat wanted to pit for slicks on the formation lap but the AlphaTauri team wouldn’t respond to him, presumably because of this rule. That is wrong.

We talk about wanting good racing but too many times we have stupid, over-complicated, regulations that don’t make any sense. More importantly the casual viewer who is just getting into F1 and watching the race to the last lap often has no idea what the end result is when penalties kick in later.

Three races in and we have now had three protests. I naively thought that the FIA and the stewards were pushing to make the races more understandable for the viewer.

I just hope F1 learns from this incident and changes the rules. If not, what’s the point of anyone going racing – they might as well let race control call the strategy.

Putting what eventually happened with the penalties aside for a moment, it was good to see Haas take a gamble by bringing in its drivers and I’m surprised we didn’t see more mid-to-rear of the grid cars throwing down the gauntlet with early stops.

The top teams normally don’t like taking gambles, so that’s the time you can very easily get one over the big boys – just as Haas showed.

Teams like Alfa Romeo, Williams, Haas, Renault, AlphaTauri and even McLaren had nothing to lose. By not giving it a shot, they gained nothing

Surprisingly, the Renault and Williams drivers didn’t stop until lap four and Alfa Romeos went for lap three (Kimi Raikkonen) and lap four (Antonio Giovinazzi). All of them should have been looking to be more aggressive.

These are the sorts of circumstances that I used to love about running a car at races. It doesn’t always work out in your favour but taking a calculated risk can bring big rewards. During my time in F1, we had a couple of pole positions and wins that wouldn’t have come our way if we haven’t given it a go.

Teams like Alfa Romeo, Williams, Haas, Renault, AlphaTauri and even McLaren had nothing to lose. By not giving it a shot, they gained nothing.

Just imagine if Renault had thrown down the gauntlet and pitted at the end of the warm-up lap. It has a car that was reasonably quick in the race and two drivers that are good in slippery conditions who had only qualified 11th and 14th.

They came around at the end of the first lap ninth and 16th so even if they had pitted then they would still have ended up much further up the pack within a lap or two. By lap 12 they were in 11th and 16th, so doing the same as everyone else meant nothing was gained and actually cost Daniel Ricciardo a couple of places.

You only really get one hit at these sort of decisions and very little time to make them. We can all say hindsight is 20/20 but I tweeted “slicks, slicks, slicks” as the cars were coming into the last section of the track on the warm-up lap. 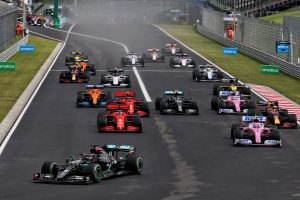 The Hungarian Grand Prix as it happened
Read more

Yes, it might have been a lap early and a lap of risk but by getting out of the queue of cars you also reduce the risk of being taken off by someone else getting a bit too adventurous on the first lap. From there on in, it’s down to your drivers to stay on the road.

I’m not having a go at Renault here, I’m just using it as an example of a team that didn’t qualify as well as it would have liked and therefore could have rolled the dice in those circumstances.

Williams also surprised me, although the car is probably not quite quick enough to carry through the opportunity. Haas wasn’t either in the end, as we saw by how it eventually fell back, but Renault might just have been.