It would be easy to say the only similarity of Sunday’s race to last weekend’s Austrian Grand Prix was a Mercedes on pole position and one of its drivers on the top step of the podium. But it was still very entertaining.

Last weekend, a lot of the excitement came from the various visits of the safety car to the circuit. This weekend, there was just one safety car early on when the Ferraris hit each other at Turn 3 on the first lap.

There’s no love lost between these two drivers and with Sebastian Vettel moving on at the end of the season – if not before – he has no reason to be Mr Nice Guy. Yes, Vettel left a gap and Charles Leclerc went for it, but it was always going to be a gap that would get much smaller. To get out of that situation without some degree of damage was impossible.

Blame is difficult to apportion on occasions like this. Leclerc has put his hand up, but I think there was room for both of them to be a bit more respectful of each other. It’s the old saying, you can’t win a race at the first corner (or the third for that matter), but you can definitely lose it.

As I said in my initial verdict on the incident, when you are caught up in those midfield battles you have to expect the unexpected.

But enough about Ferrari and its problems for now. We’ll get back to that later.

Lewis Hamilton showed in qualifying why he is – according to some who have reported it – supposedly asking Mercedes for $40million big ones for next season. He was in a league of his own in the wet and in the race it was exactly the same.

He led from pole, kept it neat and tidy, didn’t use the kerbs too much and cruised home to another win. But behind him, it was another interesting and exciting race.

So what have we learned about the teams in all-round terms of their performance in the first two weekends?

Here is how I’m ranking the teams after two events at the Red Bull Ring. This isn’t just a pace ranking, but a look at each team’s general performance and execution of these back-to-back GPs.

Mercedes scored another one-two, but it wasn’t an easy one. Valtteri Bottas had to come through from fourth on the grid after some brake disc glazing appeared to hold him back in qualifying. But then, when your team-mate does a 1m19.273s and is 1.428s faster than you, there must be some reason or excuse!

That’s 1.8% slower, which is a lifetime in Formula 1. Whatever, Bottas recovered on race day and heads away from this double weekend in Austria with the championship lead. But to maintain that he will need to pull his finger out as Lewis is very much on his way to potentially equalling Michael Schumacher’s seven world titles and is taking no prisoners.

With Ferrari completely out of the equation, the direct opposition for Mercedes is now Red Bull. It won at the Red Bull Ring in 2018 and 2019 and came away from these two races with a solitary podium – and even then it was the lowest step.

We have been saying all winter that if there was going to be any chance of a championship tilt for Red Bull, it needed to start the season scoring some big points. It hasn’t done that and the team looks a little confused with its development direction.

When you see a team back-to-backing components for a second time in as many weeks, it means it still has a question mark over any changes. That’s never a positive and it delays committing to its future development direction. In a season when no-one knows how many races there will be, there isn’t time to stand still.

Lando Norris doesn’t give in too easily and is fair, hard and has very good judgement, as he showed with another strong drive.

McLaren has focused on its homework. You can’t just throw bits at the car. You need to identify your deficits and rectify them and, over the last two seasons, that exactly what McLaren has done. When you get on a roll, the confidence builds.

Racing Point has never hidden the fact that it based the design of its 2020 challenger on the 2019 Mercedes and has worked closely with the FIA to make sure its approach was completely above board.

At last it was able to show the true potential of what everyone is calling the ‘Pink Mercedes’. On Friday, Racing Point let loose and showed exactly where I think the team believes it stands as far as performance is concerned. 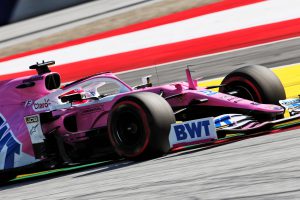 The car did have a major drop-off in the wet qualifying session, which it is confident won’t be a problem next time given the lessons learned after struggling to get the tyres working, but come race day both drivers did an excellent job.

For Sergio Perez to come from 17th to very nearly fourth was a fantastic drive and Lance Stroll starting 12th and finishing seventh confirmed that, when it all comes together, Racing Point will be a force to be reckoned with.

My only question is does it have a direction for development? The others are not going to stand still so it will need to keep improving.

Ferrari’s engine performance last year was like a light switch. From being fastest speed-wise everywhere to ending up mid-pack knocked it sideways. I didn’t believe Ferrari would step outside of what we call the grey areas of the regulations in terms of the engines, but it looks like that might have happened.

Ferrari is not new at this game so has lots of historic data to work from and should have some good simulation programmes to optimise its concept direction. Basically, you go about designing a car by taking your average top speeds for all the circuits you are going to. You might bias it a little either way depending how many circuits are either side of that average.

You then take your engine performance and set a drag level that will give you the required top speed. From that, you go about getting as much downforce from that drag level as possible and that gives you an efficiency figure for that average-speed circuit. From there, you can run smaller wings to get to Monza speeds or bigger wing to give you as much downforce as possible for Monaco.

If your simulation is incorrect, or you haven’t got the power you thought you might have, then you need to look at why. The aero package is variable – if you have generated too much downforce and hence drag then you can run smaller wings.

It’s nip and tuck between Renault and AlphaTauri in some ways, but I think Renault keeps looking around the corner just waiting for that good result that will justify its existence.

We have heard so many times how it has as good an engine as any in the pitlane and that it has these major upgrades etc. Well, McLaren is using the same engine and doing a much much better job with the chassis so realise it and work from there. McLaren is Renault’s measure now.

For a long time, while under the technical directorship of James Key, Toro Rosso as it was known then focused on its own direction. James wanted the team to stand on its own two feet and take the battle to the big boys, but it wasn’t big enough or strong enough.

Now, it is using whatever it can from Red Bull and that has allowed it to focus on what it can achieve within its own structure.

AlphaTauri is still a junior team to Red Bull and its mission is to bring on young drivers and/or have a driver getting experience that could slip into the main team if one of its drivers happened to slip on a banana skin or Helmut Marko takes a dislike to them.

AlphaTauri still has a long way to go to be competitive every weekend. It shines at times but still trips up too often.

Williams is on a rebuilding curve, and it’s a pretty steep one.

Since 2017, it has been an also-ran and at long last I think those in the team can see the light at the end of the tunnel.

Williams is in a better place than it was for a least the last couple of seasons. That wouldn’t be too difficult but now it needs to keep pushing on.  Financially, it won’t be cheap but in George Russell it has a driver of the future. Williams needs to give him everything it can and if it does, he will drag the team forward.

Both of these teams are in trouble in their own right, but that is compounded by the seeming lack of power from Ferrari’s power unit that is basically knocking the stuffing out of them.

Their four drivers finished 11th to 14th at the weekend. Yes, that’s just knocking on the door of the points but to get any better out of it they will need the help of others tripping up.

It’s a tough place to be and motivation starts to dwindle. I’ve been there on more occasions than I would like to admit. There is nothing you can do but keep your head down and keep trying to understand why you are there.

If it clicks for them, they can move forward but unfortunately for Alfa Romeo and Haas, they also need it to click for Ferrari.

28 mins ago Rallycross No Comments