Gary Anderson: Ocon's crash is a warning - don't ignore it - The Race
Skip to content
Formula 1

Gary Anderson: Ocon’s crash is a warning – don’t ignore it

On many occasions, I have explained how dangerous it is for Formula 1 cars to pootle around either cooling their tyres or trying to make a gap for a quick lap but again and again nothing has been done about it.

Now we’ve seen what can happen with the crash that halted final practice for the Spanish Grand Prix earlier today.

Kevin Magnussen slows and Esteban Ocon doesn’t see it early enough. What could have been a quite serious accident ended up just costing Renault a bit of cash, depending on what the stewards decide.

But while you can blame the drivers, the source of the problem is this massive difference in speed caused by these slow laps.

I genuinely don’t understand why the FIA wouldn’t step in and do something with immediate effect. This is a question of safety so a change can be introduced immediately.

Just because Ocon’s crash was not too serious – although it was a hard enough hit to trigger a trip to the medical centre thanks to the size of the impact – doesn’t mean the next one won’t be. 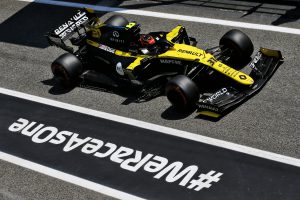 My last attempt at highlighting this problem was just before the second Silverstone race. I even put some numbers to it as a discussion starting point. So here it is again but adapted to the lap and sector times at Barcelona:

All it will require is the imposition of a minimum time, which can be used by taking the best sector times as an example.

So if you were creating these times using what we just saw in final practice, you take the fastest sector times as below:

You could then multiply these by a set factor, which can be whatever you want really. But I choose to use 1.07 as that effectively matches the 107% qualifying rule. If you are too slow in race situations at that pace then the same should apply in practice and qualifying.

That’s a 5.4s difference overall, but it needs to be measured not just in overall lap time but in each sector to stop people backing off massively as they often do in the last sector and will do here – creating a traffic jam before the chicane. At some circuits, this can be incredibly dangerous.

This would dramatically reduce the potential for cars running so slowly and being on the racing line. And as we saw in practice today, even if you are off the racing line as Ocon was or getting off it as Magnussen was, wherever you are on the track at this kind of pace differential it can be dangerous.