Williams showed in 2020 that it had gone from perilously hanging off the back of the Formula 1 grid to at least joining the competition. Reaching Q2 on 10 occasions last year was a big achievement given where it came from.

It would be easy to say this was because of the problems Haas and Alfa Romeo had with the lack of power from the Ferrari engine, but Williams actually made solid progress by other measures.

From what I can see, Williams has gone to town on every area

As it uses the same power unit as Mercedes, which set the pace at the front, that gain was clearly on the Williams side – and any further improvements will also need to come from its Grove base. 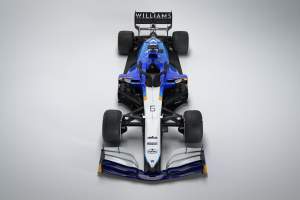 With Aston Martin and McLaren using the same engine as Williams, it has a direct measure of what can be achieved as a customer team. The competition in that very tight midfield is tough – you could improve your overall performance deficit to the front but be relatively worse off in terms of position.

With Haas and Alfa Romeo getting the benefit of whatever power unit improvements Ferrari has come up with, this could be another tough season for Williams.

But all it can really look at as a measure of progress is the percentage performance deficit. Reduce that from 2.8% and, as a team, Williams will have done its job. Any improvement in position is then down to how much other teams have progressed, or not.

Since the takeover by Dorilton Capital in 2020, Williams is in a much more stable place financially. Hopefully new CEO Jost Capito and consultant Jenson Button will help the new owners to understand that to recover from the serious dip Williams has suffered from in the past few seasons will take time.

This means 2021 is a bit of a holding season as the real opportunity to start to climb the ladder again will be when the regulations have a complete makeover next year.

Williams’s 2021 car has the same development constraints as the other teams. The aerodynamic surfaces are up for grabs, but tokens need to be spent on anything major like chassis, nose, gearbox or rear crash structure.

This means it’s mainly all about detail and, from what I can see, Williams has gone to town on every area.

It will be interesting to find out exactly where it has spent the tokens, but team principal Simon Roberts said one was spent last year. I’m not sure on what but if so that shows its commitment to 2021.

The Williams 2020 front wing was always fairly primitive. There’s nothing wrong with that, but if you are going to get the downforce required from the package every detail needs to be addressed and opportunity taken.

Williams has retained a very short chord, even twin-element main plane but now has the vortex-inducing raised section where the downforce producing elements come off the mandatory FIA central section.

This short cord main plane should be easier to control as far as airflow separation is concerned but I’m not sure you can get the ultimate downforce out of it as the first slot gap is just about where the lowest low pressure area is focused on its undersurface.

The wing loading across its span is more in line with how Mercedes goes about its business, so the whole package should be able to produce more front end load.

The nose looks different to last year’s, but I suspect this is just because of the light lines and artistic paint job.

Williams definitely hasn’t gone for the narrow nose and I don’t blame it for that decision for this one season.

It’s not easy to pass the crash tests with that nose approach and focusing on that would have diluted the design input in other areas.

As it did last year Williams also has the cape underneath the nose, so attention to detail in this area and optimising any vortex generation of its rear outer corners will also bring reasonable rewards.

The front suspension system and layout externally is very similar to last year. I like this as it is using a more conventional suspension geometry than we have seen some teams adopting over the last few years.

It gets the wishbones up and out of the way of the airflow coming off the front wing flaps, but the wishbones are still able to help realign that airflow in preparation for the bargeboards.

Getting the Williams name back at a competitive level won’t be easy, but this doesn’t look like a bad base to start from

All of this, plus being able to induce some negative camber into the suspension with wheel movement, means that you don’t have to run the maximum allowable static camber to cope with the fast corners. You also have a larger tyre contact patch in the slow corners, so more grip.

Bargeboard-wise, again there are a lot of subtle changes to the turning vanes and other details, such as the array of L-shaped vanes on the outboard leading edge. Williams has removed, or at least reduced, the height of the vertical vanes at the top of the boomerang section.

Williams has always been a team with an aggressive approach to how the sidepod drops away and for the new car it has gone for the same approach, perhaps even more dramatically.

On this version, you could say it has a radiator cover and a wraparound engine cover and then a nice big fillet radiator between the two. It seems to be using more of the area alongside the engine for the radiator exit tunnels that take the hot air to the rear of the car and the exits seem to be more of a low down letterbox section.

You can’t see the ‘Mercedes bulge’ that we saw on the works cars and the Aston Martin, but Williams has incorporated that into the engine clothing.

All of this compactness around and into the ‘Coke bottle’ shaped area is to minimise the blockage between the inside of the rear tyre and the bodywork.

This is so that more of the mass airflow passes through there and less gets pulled underneath the car by the low pressure between the underfloor and the track surface.

The images don’t show a massive level of rake, so perhaps Williams has decided to follow the Mercedes and the Aston Martin route of more consistent driver-friendly underfloor downforce.

I can’t quite see the complete detail of the rear suspension, but I’m pretty sure Williams has the rear pullrod in front of the lower wishbone forward leg.

This suggests it has tried to do something along the lines of the Mercedes 2020 rear suspension. Perhaps this was work started with one of last year’s upgrades?

In Mark Hughes’s earlier column about Williams, he said that “engineering chief Adam Carter had instigated something of a revolution in the way Williams approached the creation of its 2020 car, with longer lead times giving opportunities for better design detail and manufacturing standards”.

The problem with that is that the other teams are actually doing the opposite. They are reducing manufacturing times to allow them to throw more parts at the car, so in effect to keep up with the others you need to work out what is wrong with your design detail and manufacturing standards.

But overall, I’m impressed. Williams has attacked the car from all angles and if it can take a similar step as it did last season then it might just be firmly engrossed in the middle of that midfield pack. I’m sure there will be a few developments coming before the first race so we won’t really know where anyone stands until that event.

New owners or not, I’m sure we would all like to see the Williams name back at a competitive level.

It won’t be easy, but this doesn’t look like a bad base to start from.