The British Grand Prix is a home race both for the Mercedes Formula 1 team and its drivers and it has pushed the boat out in terms of car developments that make a big statement about the team’s progress in understanding its problems.

The changes suggest the team now has a firm grasp on how the car works and is now introducing components to improve its performance.

The upgrades are to the front suspension and its fairings, underfloor inlet vanes, the floor itself (which we see very little of other than the outer edge) and the rear wing.

But two of those areas are particularly interesting.

The first is the change to the fairing around the front wishbones where they meet the chassis.

This fairing will act as a turning vane, pulling the airflow that is coming off the trailing edge of the front wing downwards (green lines) and improving its alignment with the upside down wing section Mercedes uses as a rear view mirror mount and the more acute turning vanes further rearward on the sides of the chassis. 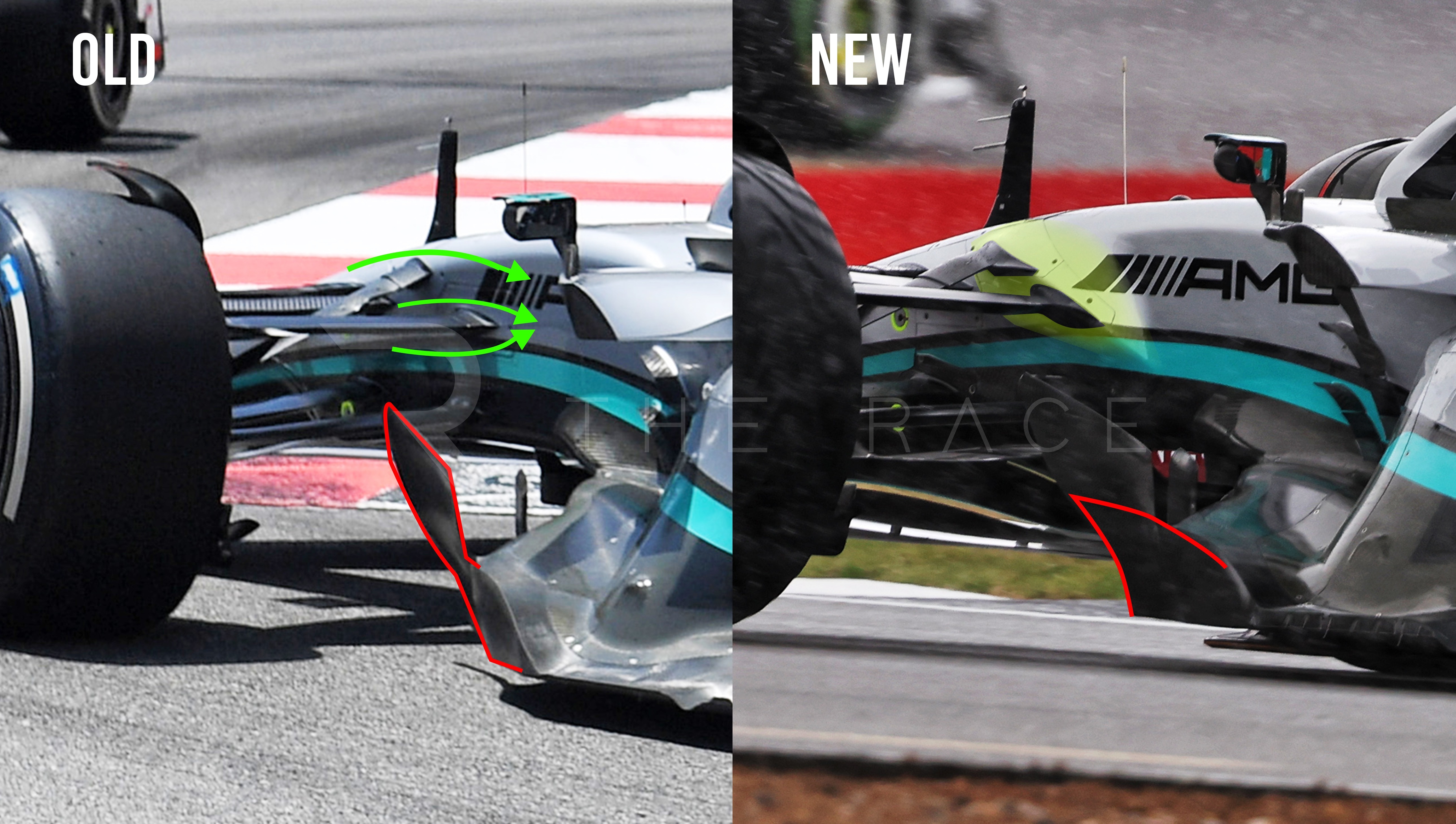 This realigned flow will then improve the consistency of the flow to the inner section of the leading edge of the underfloor.

In this view, you can also see a much larger the surface area of the outer barge board/splitter is (red lines). This is to separate the turbulent front wheel wake from the leading edge of the underfloor, especially when steering lock is applied.

Thanks to the new fairing on the inner end of the front wishbone-to-chassis intersection, Mercedes has been able to reposition the turning vanes on the side of the chassis.

These were first modified at Imola but for the latest specification both vanes are now one-piece components. A better flow to them means better flow off their trailing edge and stronger vortices off the outer edges.

The second, and most important change, is that Mercedes has joined the club with the detail of the outer edge of the floor. I have been critical about the detail in this area having been very primitive, but now Mercedes has taken the first positive steps.

The original version was doing the same as the new version but just not powerfully enough to really influence the performance of the front corner of the underfloor.

This meant that all the work of generating the low pressure under the car was being done by the diffuser. And when the sides of the floor were on the ground they induced porpoising, when they went away from the ground, they just lost too much performance.

Now, with the larger surface area outer bargeboard/splitter and these turned-up exits on the edge of the floor with the vanes helping the internal splitters to turn the airflow outwards, Mercedes is doing much more with that critical front corner of the floor. 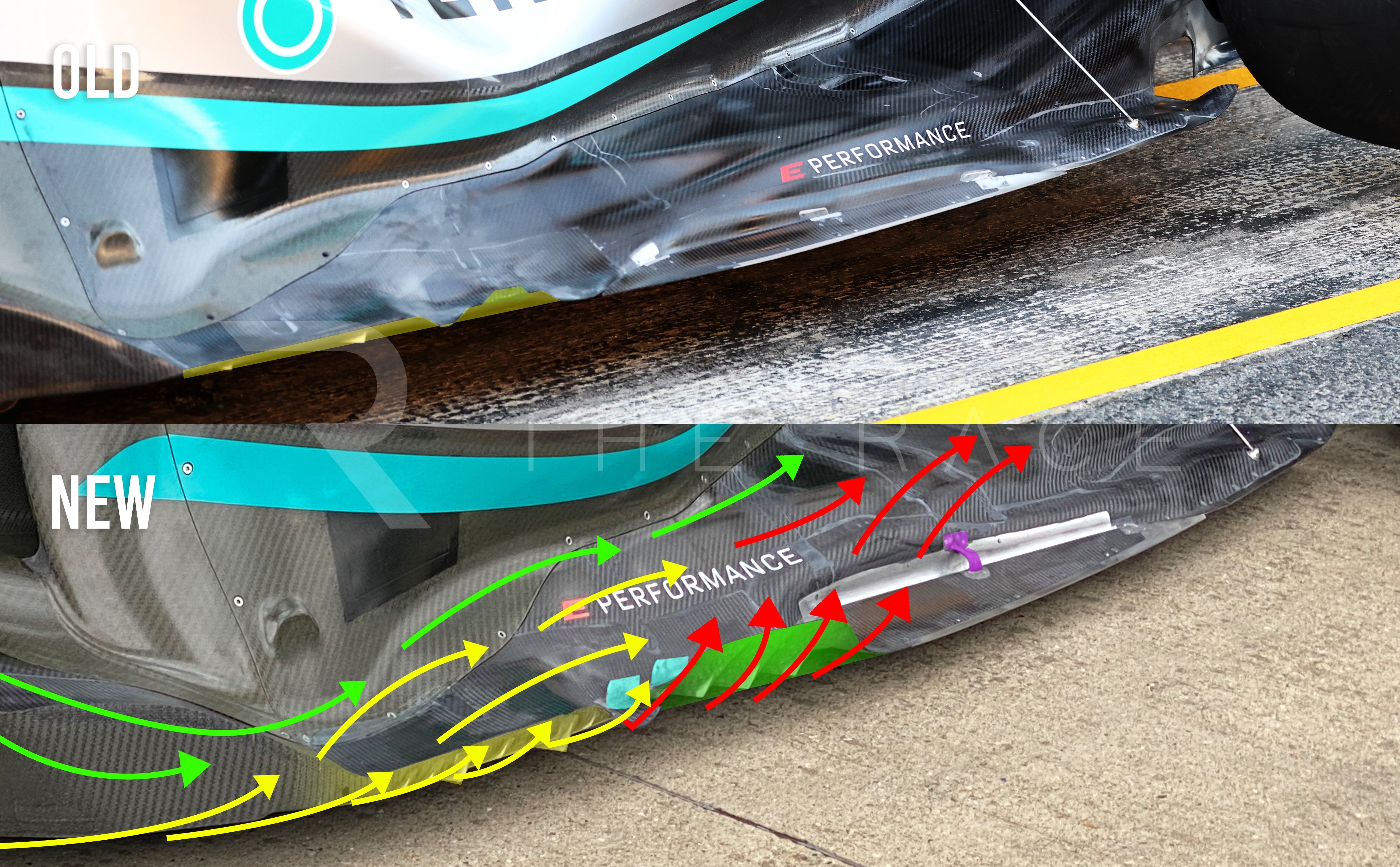 The arrows show how Mercedes are trying to get the various airflows to all join up and work as one.

Obviously, some of these vanes and their edges will generate vortices that are much more powerful than simple airflow. But their route going rearwards won’t be much different to my flow lines.

To get the next step, I’m pretty sure there is still work to be done further rearward on the floor edge. That area is still fairly basic and will be far too critical to rear ride height.

But what Mercedes has introduced should be a step forward. It now just has to get on top of the set-up to go with it all.