Paul Ricard is probably the best circuit of the 2022 Formula 1 season so far that offers the potential for a Mercedes victory, despite a difficult first day of practice.

Generally, it’s fairly smooth and any bumps are simple bumps rather than undulations in the surface, which means that running low ride heights will not be as big a problem as it normally is.

That said, plenty of rivals – Ferrari, McLaren and AlphaTauri – have all arrived with substantial upgrades while what Mercedes brought is comparatively minor. However, it isn’t always the big visual changes that improve performance. 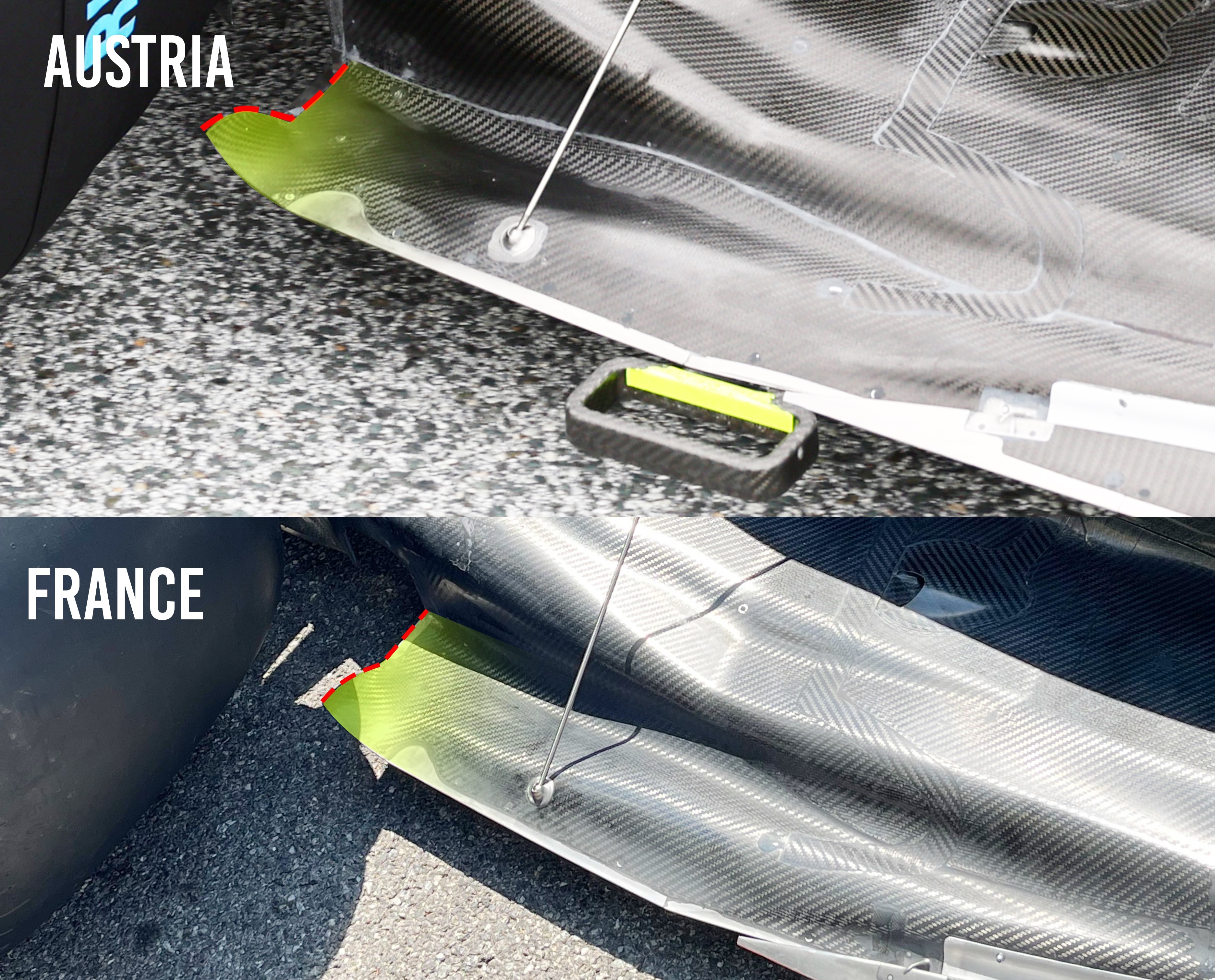 Mercedes has a very small modification to the floor just in front of the rear tyre. This is to get the flow in this area to connect up better to the inner tyre squirt when the rear tyre rotates onto the track surface.

As can be seen from the various pictures, this is not what I would call a ‘save your season’ modification. It’s more a dot the i’s and cross the t’s change to optimise a small area of flow separation.

Unlike main competitors Red Bull and Ferrari, Mercedes seems to be very reluctant to go away from the flat floor sealing philosophy on this section of the floor.

I classify this type of sealing as a ‘light switch’. It either seals or it doesn’t, whereas other use more of an aerodynamic seal, which is never quite as good when it’s on or close to the ground but much more consistent. Think of that as more of a ‘dimmer switch’. 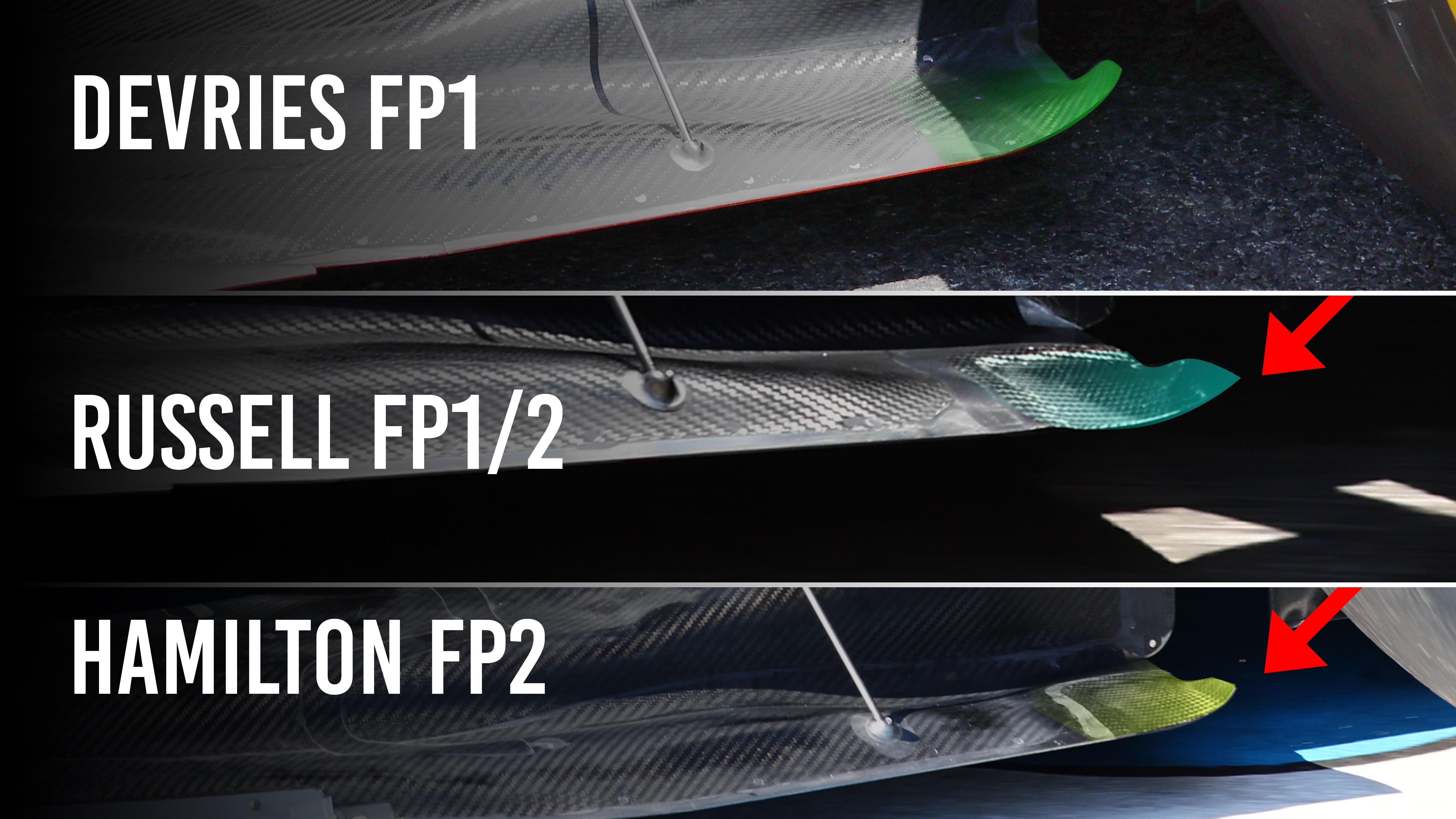 Mercedes ran the modified floor on George Russell’s car in FP1, but ran an old specification for Nyck de Vries before switching to the upgraded floor when Lewis Hamilton took over the car.

There’s also a small modification to the nose of the Mercedes, with larger holes for increased driver cooling. That’s essential given the heat at Paul Ricard. 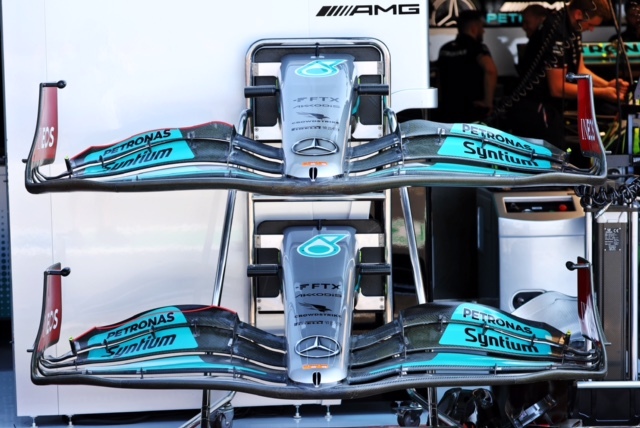 Mercedes did have two different trim variations for the rear flap of the front wing (marked in red, upper wing element, left-hand side of picture) to allow it to test a lower downforce set up for Paul Ricard yesterday.

With the long straights, top speed becomes a priority, especially for the race but you still need the downforce to get the tyres working for that one lap in qualifying. That’s something that Mercedes has been struggling with this season and even during previous seasons. Sure enough, during Friday practice tyre warm-up was again a big problem. 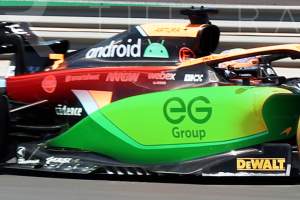 If you give the tyres a hard enough time to get them working on that one lap, then the tyre degradation over a long run will be worse.

It’s the old story, it doesn’t matter about the ultimate performance over any season you have only got to be better than the opposition.

Mercedes realises that it is the race that gives out the points, so has been confident in the past to have a set-up that protects the tyres for the race but was still good enough to get those pole positions.

But that was in the past. Currently, both Red Bull and Ferrari have made steps in one-lap performance so pole positions are more difficult, if not impossible, for Mercedes.

That means it’s right to use the same philosophy and make sure the car is set up to bring as big a reward as possible in the race.

On the subject of wings, there is something on the Mercedes rear wing philosophy that confuses me. This year’s regulations were set out to reduce the turbulent wake coming off the rear of the car, which included the rear wing. It is the main reason why the rear wing and endplates blend into each other with no endplate above the wing’s upper surface. 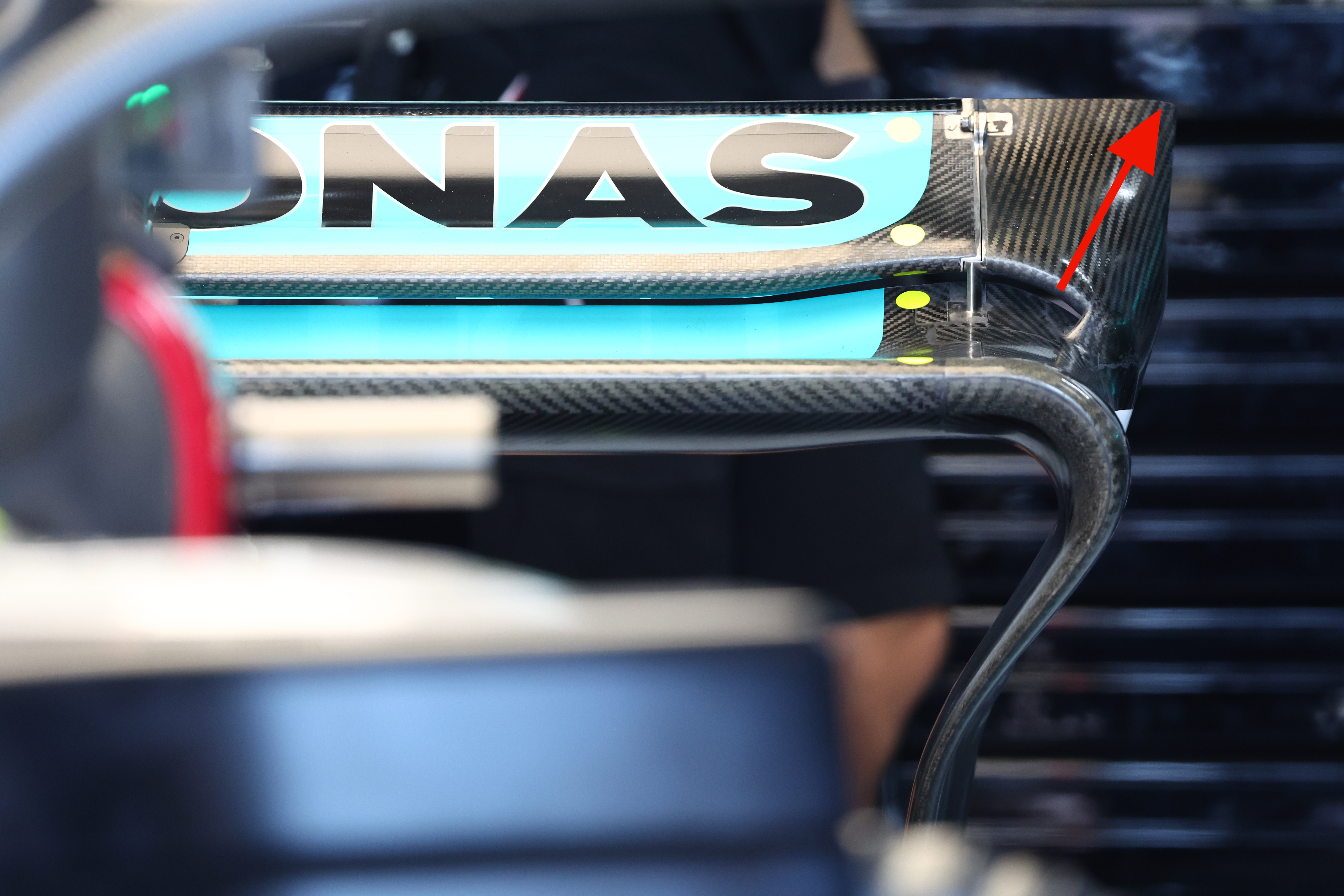 But Mercedes still has a very pointed outer upper corner (red arrow), which will induce a vortex. This will create turbulence behind that any following car will have to cope with as well as increasing the drag on its own car. Yes, the wing will give potentially more downforce but as it is outside of the DRS flap section, the drag will not be reduced when the DRS is open. 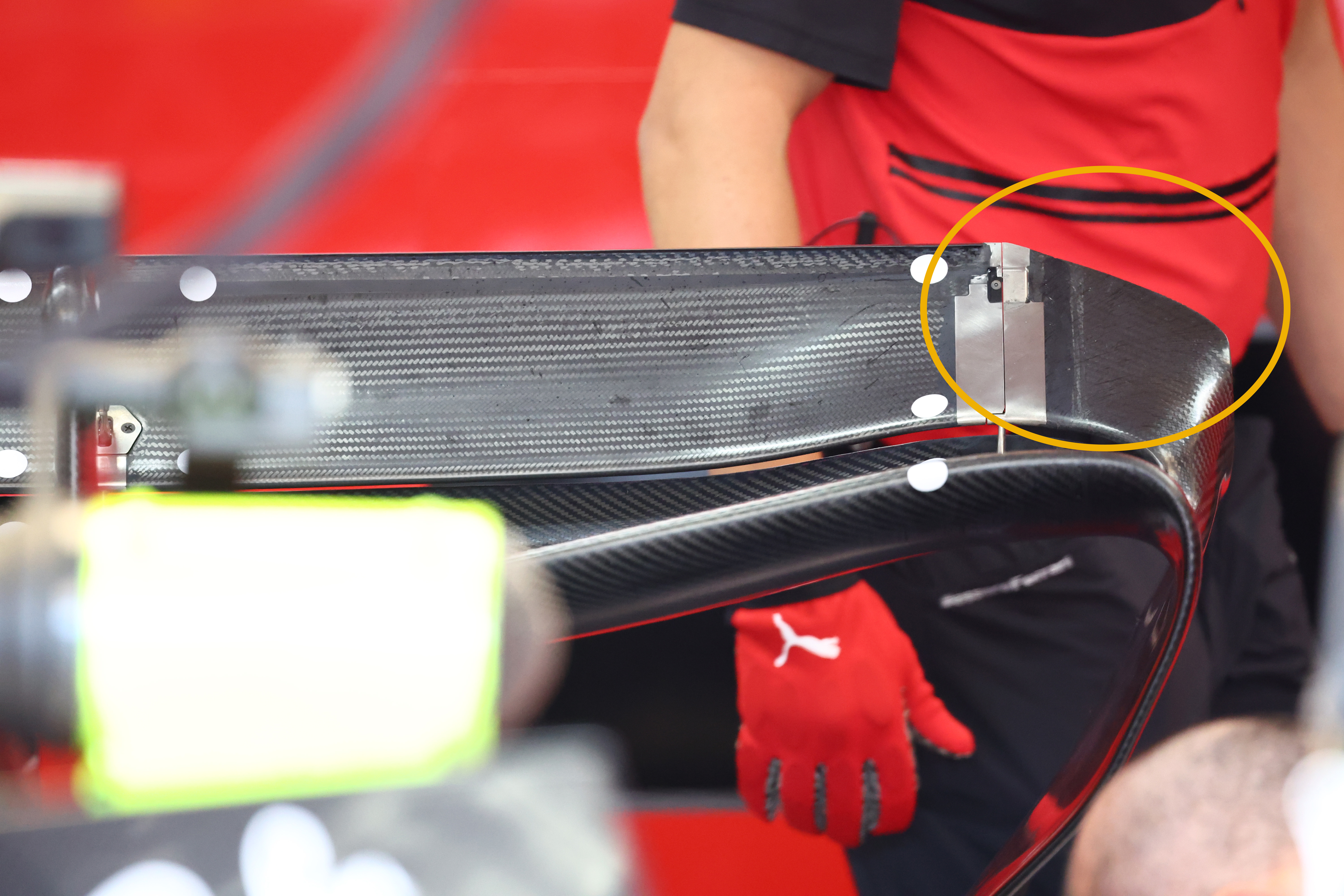 The other teams including Ferrari and Red Bull have gone for the alternative philosophy and tried to reduce this vortex as best possible (orange ellipse) they get the required downforce from the centre section of the wing so when the DRS is opened they benefit from a greater drag reduction. 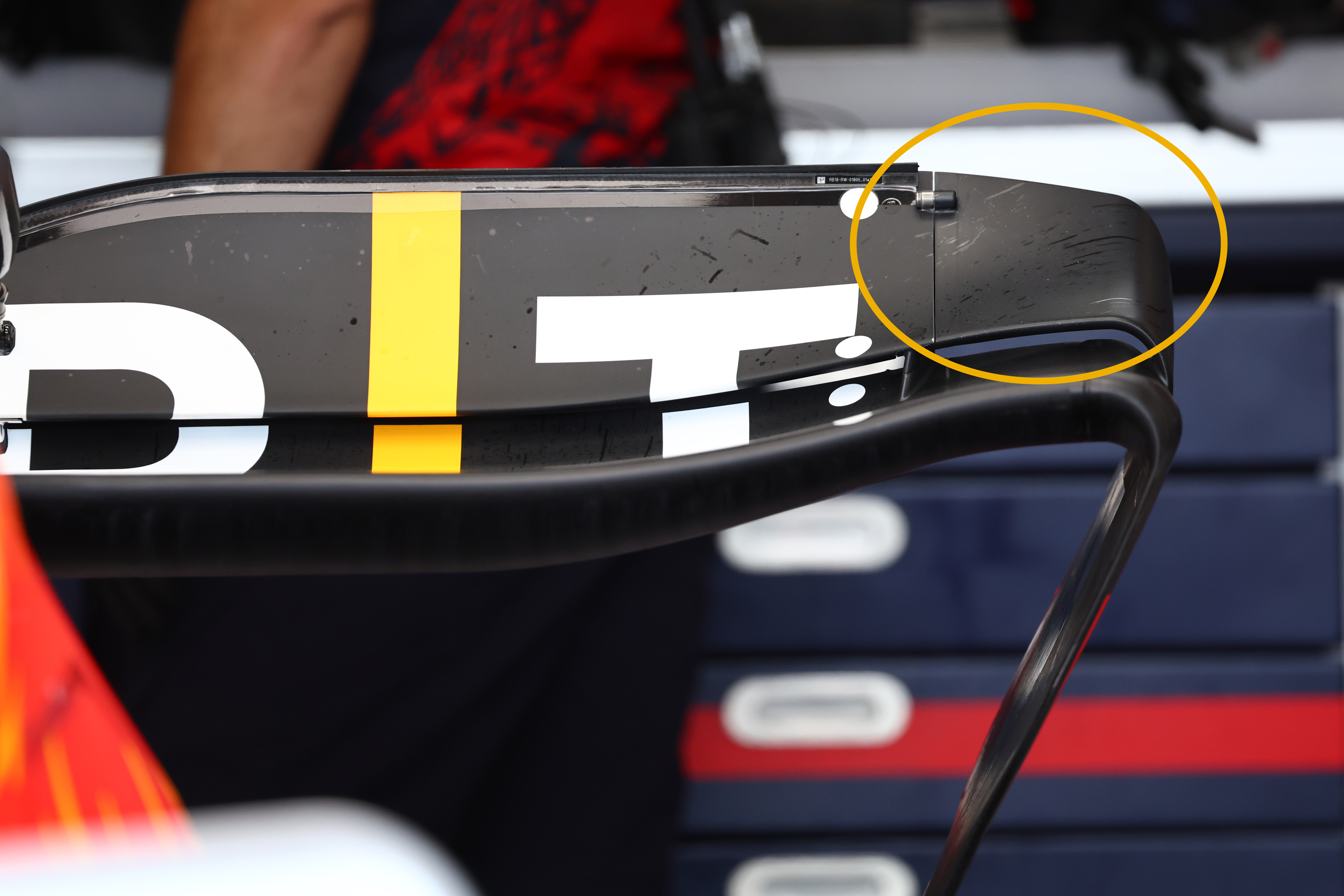 I’m sure it’s not a written rule on minimising these vortices, but doing so was the intent of these new regulations. In this day and age of endless technical directives clarifying things, perhaps one on this Mercedes interpretation wouldn’t go amiss?