Formula 1 has done a good job to put together a mock up of what it thinks a 2022 car should look like.

You would expect it to look aesthetically pleasing, after all it’s the group that came up with the regulation definitions that has put this show car together.

But I’ve been through many regulation changes both as a designer and an observer and it’s always the case that what the rulemakers think they might get is, in reality, very different to what is actually produced.

The rules are very tight, very prescriptive and there are more limitations than ever before.

But collectively across the 10 F1 teams there are thousands of people working endlessly to find the ways to extract performance in ways that those writing the rules might not have considered.

That doesn’t just mean finding loopholes in the rules, although that is part of it, but also it’s about simply finding opportunities to exploit.

What F1 has produced at least gives us the basic idea of a 2022 car and the car that was revealed was similar to the renders we’d seen when they announced the regulations in 2019.

But there are a few differences that show what scope there is for variety in the rules.

I actually do like what I see because at least it is comprehensively different and not just about minute detail changes. But the proof of the pudding will be when the real cars hit the track.

One of the major objectives of the 2022 rules is to improve the ‘raceability’ of the cars. So that means allowing closer battling with the lead car creating less turbulence and the one following able to work more consistently. That’s an outcome that everyone wants to see.

You could say that the philosophy has been to hit the blend button on all of the surfaces. Details like the intersection between the front and rear wing elements and the end of their respective endplates have large blend radii. This reduces the difference in surface flow velocity so reduces the potential to generate a vortex in these areas.

Although hidden under the leading edge of the underfloor, those turning vanes do more or less the same as the bargeboards did. Yes, they are not as exotic but with the car generating a large majority of its downforce from the underfloor, they are just as important. A small change in position or radius can make a massive difference.

As far as performance is concerned, it will be the underfloor and its detail that brings the big rewards. But once again, it will be the sum of all the individual components working together that is critically important. Those underfloor turning vanes, the underfloor detail, the rear beam wing and the floor side detail will all need to be developed as one.

The interesting thing is that this is the first ‘real’ example we have seen of a 2022 car and already there are those within teams who are saying that their own work is leading them in a different direction.

The rules are very prescriptive, but when you hear that it sounds like there is room for some lateral thinking as far as the concept is concerned.

It would be disappointing if all the cars ended up the same. We need innovation, even if it is very limited, because through innovation comes opportunities that can open some doors in different fields of engineering.

I’m pretty sure we will see differences and if you look through the pictures that F1 released, there are two different concepts for the nose and front wing.

The rear beam wing is also different in some of the shots, one has a horizontal trailing edge the other a step in the trailing edge.

The initial concept that each team starts with will be honed to perfection, but I doubt very much that each team will start with the same concept. The way the rules are written, there is no way to read through them and end up having exactly the same vision of what the car should look like.

You need to draw out a car based on the regulations before you will see the big picture and the areas that offer the opportunity to gain performance. From there on in, it’s about optimising each and every component.

Remember the 2009 cars that simplified the bodywork on the side of the car? The intent then was to make the cars better in turbulence, but it didn’t work as hoped.

Teams simply cut back the sidepods and exposed a whole new area to put aerodynamic flicks and tricks into, giving cars a very different look to what was expected.

As has been said many times, that rule change was underfunded in both time and research and development funding. This rule change for 2022 has had an extra year thanks to COVID-19 and probably double the research time and money that any individual team would have at its disposal.

The objective is to make the cars perform better in traffic or turbulent airflow, so we will only be able to judge that when the cars hit the track early next year. Then, and only then, will we know if it has been money well spent or flushed down the drain. 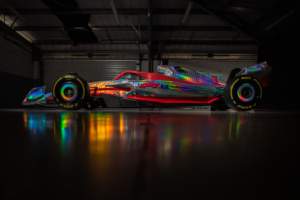 Now we have a picture of what the intent is, personally I can’t wait to see what a few thousand engineers can come up with to get the best from their packages. We really won’t know that until probably February next year at the earliest, so quite a while to wait.

These next six months will be nail bitters for each and every team. Get it right and you are on your way, get it wrong and with the budget cap and controlled development you could be in for a very difficult year.

For the teams, it must also be a bit disconcerting to hear that the powers to be at F1 and the FIA are saying that if the objectives aren’t met when the teams are let lose to design their cars then they will introduce subtle changes to the regulations to alter the outcome.

To have all of that hanging over your head when the teams are restricted with windtunnel and CFD run time and a budget cap doesn’t make sense to me.

And worst of all, nobody has a clear idea of what they should be aiming for, and what the opposition might be able to achieve in terms of performance.