George Russell was running eighth in the Styrian Grand Prix with every chance of a points finish when he had to first switch to a two-stop strategy, then retire thanks to a loss of air from the pneumatic system.

He started 10th and climbed to eighth on the first lap thanks to Pierre Gasly and Charles Leclerc’s first-lap problems and ran behind Fernando Alonso throughout the first stint of the race.

Had he held position between Alonso and Yuki Tsunoda, he would have finished 10th – but he felt that it might have been possible to finish as high as seventh.

The loss of air from the pneumatic system is unusual, but not unheard of and you do occasionally see the system being topped up during pitstops.

These engines run an air valve system rather than using mechanical valve springs. Basically, that means there is a small cylinder around the valve stem that replaces the function of the valve springs.

The function of these cylinders is to close the valves after the camshaft has opened them. It’s important that the valve shuts quickly, otherwise, it might hit the piston.

Springs have always been a problem because at high revs the spring would start to float and either fail or not close the valve quickly enough.

The air valve system is running at a fairly high air pressure and there is an additional reservoir that is also pressurised, which adds a little more air volume to the system just to cope with very small leakage.

But if a leak occurs anywhere in the system, it doesn’t take very long for that to become a critical problem.

There is lots of problems that can lead to a leak. It could be a simple seal problem, a leak in the piping between the heads and the reservoir that is in the sidepod or a small amount of porosity in the head castings.

I have had all of these, plus quite a few others, happen during my time but I’m pretty sure Mercedes will be able to identify it and eliminate future problems. 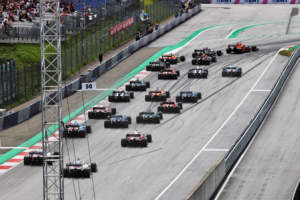 Williams became aware of the problem during the first stint, leading to the team switching Russell to ‘Plan B’, which meant two rather than one pitstops. That was to give opportunities to top up the pneumatic system at the stops.

When you are talking about two second pitstops for a tyre change, anything that interferes with that will basically ruin your race.

It’s not a common problem, but the teams will be prepared for it. Normally, there would be a dry break coupling somewhere accessible. You need to connect to that and then top it up.

If everything goes well, you are still looking at 10+ seconds absolute minimum, and actually 30s would be more representative.

Williams realised it was a critical problem on lap 25 and brought him in from eighth to top up the air. But that didn’t solve the problem and soon he was back in again and retired. The team tried to manage the problem but the rate of air loss in the system was too high

There would also be a system that shuts down the engine if the pressure gets too low. This is to protect the engine from complete failure with the valves hitting the pistons.

If the leak continues or gets worse, it is better to just retire and save the engine as Williams did. A small consolation for the team and Russell will be that the next race at the Red Bull Ring is less than a week away.