Formula 1 steering wheels today are complicated pieces of kit that allow the driver to change all sorts of settings, but Lewis Hamilton’s Azerbaijan Grand Prix mistake showed the disadvantages of this.

While battling for the lead with Sergio Perez at the restart, his left hand accidentally hit the ‘magic’ toggle on the rear of the wheel, putting him into a mode that winds the brake bias as far forward as possible to help keep the front tyres warm under the safety car and on warm-up laps.

That setting was engaged for the formation lap before the standing restart and Hamilton did turn it off for the start. But the fact a driver can so easily hit something by accident that basically guarantees they are going to go off is a big problem.

Imagine if that had been someone in the middle of the pack, or if it’s a corner without runoff? That could cause a very serious accident with multiple cars involved.

Having such a dramatic impact on the car through one push of a button is a safety concern. A glance at the Mercedes steering wheel shows an astonishing number of switches, dials and paddles – more than 20 by my count – so if anything it’s a surprise these kind of mistakes don’t happen more often.

There are ways that the teams themselves could introduce systems to prevent a repeat and Mercedes has now made clear it will do something about that. I suspect it will be either changing the design of the steering wheel or a system that prevents that mode from being engaged when at 100% throttle, which Hamilton would have been at given it engaged at the same time as he was making an upshift.

But I’d like to see some proper regulation covering this. I’d suggest that a rule should state that no driver-activated switch should be able to impact a system by more than a certain percentage from its initial setting when the car’s road wheels were last at zero road speed.

This refers to just single-action functions like push-button systems. Anything that involves interacting with the menu screen is a different matter because the driver has to go through a process that couldn’t happen by accident.

But if you look at the location of the ‘magic’ button on the Mercedes on the rear side of the left of the steering wheel, it’s no surprise Hamilton was able to hit it by accident given the position of his left hand for starts.

By creating this rule, it will still allow drivers to access whatever modes under safety cars and formation laps, but it will prevent a repeat of this kind of problem. 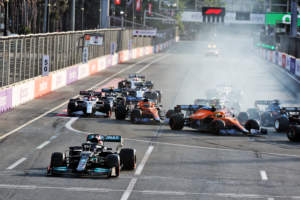 Of course, ideally, we would like to see the drivers “ drive the car alone and unaided” as the regulations demand. Most of the radio conversation is about switching between various modes impacting the engine, differentials, brakes, activating fail modes and the like.

While that’s a necessity with the way the current-generation engines have evolved, there is a chance to simplify things with the new engine rules due to be introduced in 2025.

The steering wheel should be there for the driver to drive. If you look at the steering wheel we had on the Jordan 191 from 1991, that’s exactly what it was for. There was a dashboard behind it but only for basic information. We didn’t even have semi-automatic gearshifts then, so it was a very simple piece of kit.

I’m not saying we should go back to that but by comparison, today’s steering wheels are ridiculously complex and uber-expensive. Driving fast should be about the driver’s feel for the car, not about who manages to operate the systems correctly.

And often it can cause dangerous situations – remember Kimi Raikkonen hitting the back of Alfa Romeo team-mate Antonio Giovinazzi at the end of the first lap of the Portuguese Grand Prix when focused on steering wheel settings.

It is illegal to use your mobile phone while driving a road car, yet the safety commission of the FIA considers it safe enough to allow a racing driver to play with all these steering wheel knobs, dials and buttons whilst travelling at stupid speeds. It seems a bit alien to me.

And I doubt Hamilton would disagree with this idea given he did a great job in Azerbaijan and could have won the race had he completed that pass on Perez for the lead. But then, that’s the ‘ifs’ and ‘buts’ of F1.