Formula 1 implementing a ‘reverse’ sliding scale for aerodynamic development, whereby the top teams’ windtunnel and CFD time is more limited than those struggling, is a great idea, but it doesn’t go far enough.

Under these rules, there’s a set formula for windtunnel and CFD time, with increasing amounts awarded to teams as you work your way down the previous year’s constructors’ championship table. So in 2021, there will be 2.5% increments between the teams with the top team getting 90% of the maximum up to 112.5% for the last-placed team. For 2022 to 2025 it is 5% steps ranging from 70% to 115%

But last month, I put together an article on achieving this kind of effect using points and manpower, which I still believe is a better formula than the one F1 has come up with.

Yes, my proposal is massively draconian for the top teams and the percentages might have needed slight changes but what matters is it factored in more of what makes a team successful beyond mere championship position.

One of the problems of the rules F1 has approved is that finishing one place higher in the championship can be detrimental to your future. Yes, you get more prize money but you get less aero development resource and every team really wants to build and improve. As a result, we might see some strange things happening as the season comes to a close.

It also seems strange to allow the less successful teams more than the limit as that will result in increased spending. If you are going to use this structure, why not just let the last-placed team have 100% of the available windtunnel/CFD time and then the winning team gets 77.5%? That seems much more sensible.

Instead, F1 is putting budget caps in place with one hand and asking teams that don’t have that sort of budget anyway to spend more with the other. This is not joined-up thinking for the good of all.

By not going beyond 100%, it would create the same differential as F1 has proposed but at least it would have kept the cost the same for a struggling team. I would also like to know in detail how near the tunnel and CFD usage limits each team came in 2019, which would have been another factor added into my formula.

For the 5% steps from 2022 onwards, there’s no reason why it couldn’t also be set at 100% for the worst team and 55% for the winning team. This is the point where it really starts to hurt the big teams, but if a small team has a golden streak then it will suffer in the future. And it’s the future that these teams are working for.

When judging the impact of the rules F1 has put together, it’s difficult to be precise because it doesn’t factor in the overall manpower that exists. The big boys can therefore do more basic analysis before putting parts into windtunnel or CFD, while the smaller teams will struggle to match the efficiency in that area to make use of the extra percentage points.

Looking at the gaps, with 2.5% between two teams I don’t believe that will make any visible difference that will cut the gap between the big three and the rest. It will be the team in fourth place that will likely be leading the way, so that 7.5% difference between, based on last year, Mercedes and McLaren isn’t enough.

Once it moves to 5%, which is two years away, then we might just see it starting to have an impact. Unfortunately, the big teams will have had time to have found an efficient workaround, so again that will diminish any potential change in the overall picture. So it’s still going to be about the lower-ranked teams just simply doing a better job.

Over a season, the teams talk about finding something like two seconds per lap from development. That is a bit of an exaggeration and the real number is more like a second. If we simply take a lap time as 100 seconds, then that’s 1% improvement. If it was all aerodynamic, which it’s not, then that is around a 10% improvement in the aerodynamic performance of the car but it’s not all about just downforce, as efficiency and aero characteristics come into play as well. 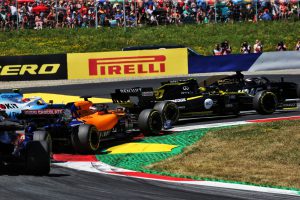 So to give an approximate guide to the influence these changes might have, that’s the gain you are cutting into. Also, the development rate of a team is normally in line with research and development of a new car, so the end result should be that any new car will also not be quite as good.

The aim of this mechanism is to create a long-term balancing up of the field, along with the cost cap and the promised financial changes that will even up the team payments. But this is a simple formula and doesn’t take into account what big teams like Mercedes and Red Bull have built up over previous seasons.

My previous formula suggestion with points and manpower at least takes that into account. It also doesn’t penalise a team for one good season where they might finish ahead of another team or two by just a few points but lose out relative to them on windtunnel/CFD time by a disproportionate amount.

I don’t think that it will make lesser teams more competitive against the big boys, but what it will do is help to keep a few teams that don’t have bottomless pockets in the formula. F1 has for years been a wasteful money pit and something needed to be done.

What’s proposed here is a step in the right direction. But I would still have found a number that covered everything – drivers, top earners, commercial, basically everything. Then, and only then, we might just have seen the playing field start to level out that little bit.

People like Red Bull team principal Christian Horner have talked about this becoming a handicap formula. I totally disagree but I would be pushing to make it more of an equal formula.

If we are going to continue as is and not allow customer cars, which I agree with, then the potential spend and how and what that is spent on requires close control. I don’t want to harp on, but the amount of points a team scores in the season shows its competitive level. Winning the championship with four or five races to go is not what we want and just shows a team’s domination, but winning the championship is only a snapshot of how competitive a team is.

I’m all for freeing up the rules a bit to allow more innovation within the cost cap controls. But it needs to be studied carefully to make sure that any openings are achievable by all the teams, not only the ones with deep pockets.