The first thing to say is that Mercedes has really gone to town on minimising McLaren’s sidepod cooling solution.

I criticised Ferrari for having clunky sidepods, so now it’s necessary to find a word for the opposite of that! We can call them slimline sidepods, and the whole package is not dissimilar to what Williams has come up with so it must be possible to come up with a cooling package to fit within that slender body package.

The regulations demand that teams have to supply CAD data to the FIA to allow it to give an opinion on it before it hits the track, so from that I would say that, yes, it does all comply.

I’d also suggest Mercedes is not a team to get led up the garden path by erroneous windtunnel results, so I’m pretty sure it will have researched this concept to death before hitting the manufacturing button. That’s is why it didn’t make an appearance at the first pre-season test in Barcelona. 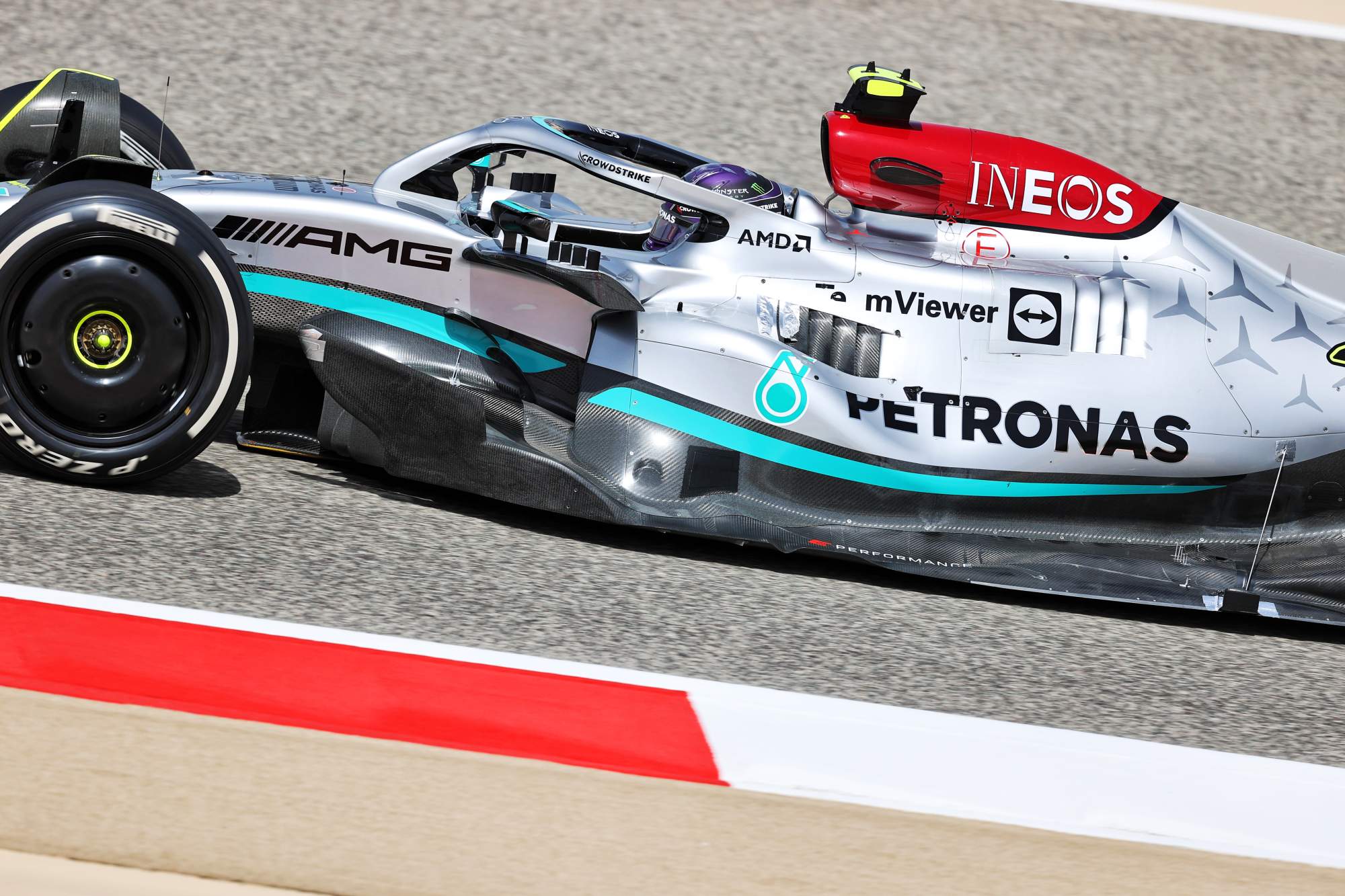 Mercedes has exploited the use of the outer turning vane and made it more into a standalone bargeboard. The radiator inlet is now more vertical than all the others and the forward upper crash structure is a standalone component and shrouded in a dramatic turning vane that also mounts the rearview mirror. It also has some small vertical turning vanes in this area.

The initial part of the underfloor is raised slightly and reveals the ends of the turning vanes that are under the leading edge of the underfloor. These will be working to generate outwash to pull some of the airflow out from that front of the floor, allowing the diffuser to work on the airflow that is going under the floor more centrally. 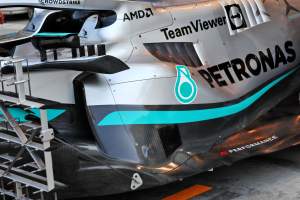 With this sidepod package, Mercedes will be creating outwash low down while still allowing efficient flow front to rear above the cyan line on the sidepods.

This will generate the vortices that help with sealing the floor further rearward, but also allow high levels of mass flow through to the beam wing and over the upper surface of the diffuser.

Mercedes has radiator outlet louvres in various places to assist with the cooling package, which still has its main outlet at the rear of the engine cover. The engine cover itself is more bulbous than before, again to house some of the cooling requirements.

To get an idea of how it all works, I’ve put some potential airflow arrows on the Mercedes size-zero sidepods. 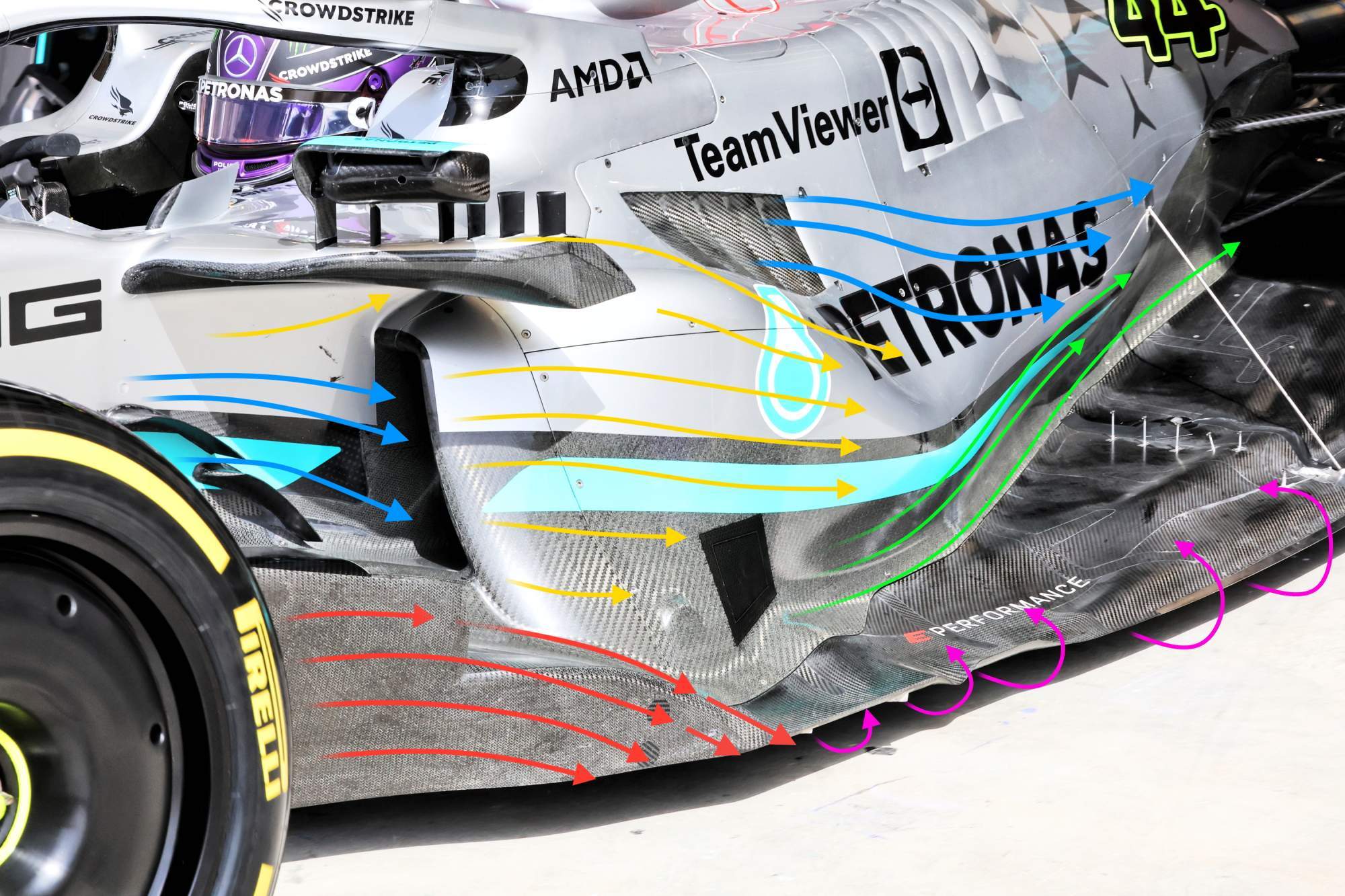 The blue lines are airflow through the radiator and out of the louvres on the corner of the sidepod-to-engine-cover side. The yellow lines would be the flow lines as they go over the sidepod.

The green lines go into the lower corner of the radiator duct and, from what I can see, come out of the small sidepod duct. This will mean that when the radiator can’t flow anymore, there is a route for that airflow spillage without affecting the flow around the rest of the sidepod.

Mercedes has also added a body stay to support the rear corner of the floor. The regulations have load tests for this area, but if the floor is stiff enough in its own right then it will not flow upward when a driver goes wide over a kerb so it would be very easy to damage it. These stays will simply deflect in compression but will stop the floor from flexing downwards.

Mercedes has also incorporated a new front wing in this package. This is fairly similar to the Barcelona version with a slower change of shape as it sweeps inwards to the side of the nose. This will reduce transverse airflow that can affect the performance of components further downstream. 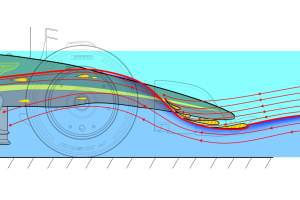 As we have seen on many occasions, looks are not everything but I have to say this concept looks interesting and seems like it might just achieve more than the opposition has managed.

However, the more efficiently it works and the more downforce it generates the bigger the chance of generating an uncontrolled porpoising effect, so somewhere along the line Mercedes will need to find the compromise between the out-and-out downforce produced from the underfloor and not making the driver sick or shaking their eyeballs out of their sockets.

Testing will give us a better picture, but doubtless it will still be a little blurred until we get to the actual race weekend. For now, it’s great to see all the different solutions to these new regulations.