Lando Norris’s expected performance level relative to new McLaren team-mate Daniel Ricciardo was one of the big talking points heading into the 2021 Formula 1 season. But based on the two races so far, he’s delivered on the need to raise his game to a new level, with team principal Andreas Seidl saying “he definitely made the next step”.

It’s premature to draw any conclusions about where the balance of power will settle between Norris and Ricciardo given the latter is yet to be fully comfortable with the McLaren. As with all of those who have moved teams, including Sergio Perez, Sebastian Vettel, Fernando Alonso and Carlos Sainz, Ricciardo is still in the transition period given how limited pre-season testing was.

But we can conclude with confidence that Norris has started the season delivering consistently well, having finished as the best-of-the-rest behind the Mercedes and Red Bull drivers in both races so far, with fourth place in Bahrain then third at Imola. 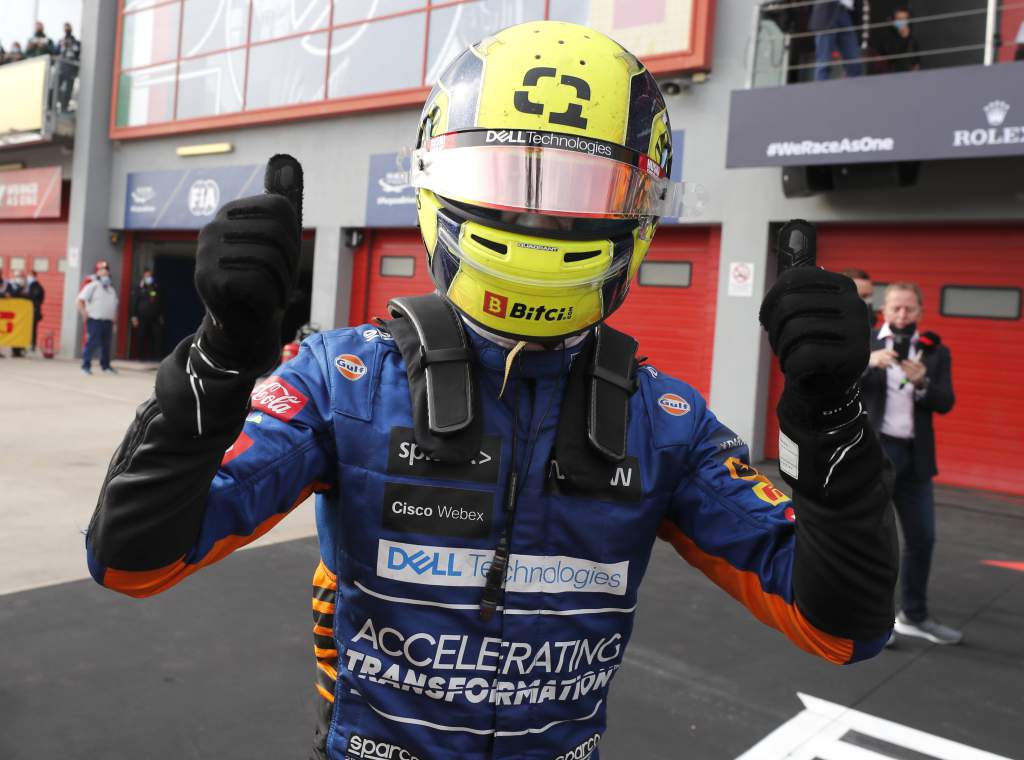 “What was very encouraging to see is how Lando is flying at the moment,” said team principal Andreas Seidl. “So it’s two race weekends in a row where he showed that he definitely made the next step as a driver.

“So I’m very happy with that and I’m also happy with how Daniel was battling through. It was not an easy race for him because he didn’t feel that comfortable in the car compared to Lando all weekend to drive the car at the limit. We have seen in these tricky conditions that a lot of people got it wrong, and Daniel drove a great race and scored despite the struggles.”

The contrast was very clear at Imola. Norris should have outqualified Ricciardo as the Q3 laptime he had deleted for running wide at Piratella was 0.372s quicker. That kind of advantage was an accurate read of Norris’s advantage.

He then comprehensively outpaced Ricciardo in the race, with McLaren rightly swapping their positions on lap 10 after Norris had passed Sainz, Lance Stroll and Pierre Gasly to run behind Ricciardo. 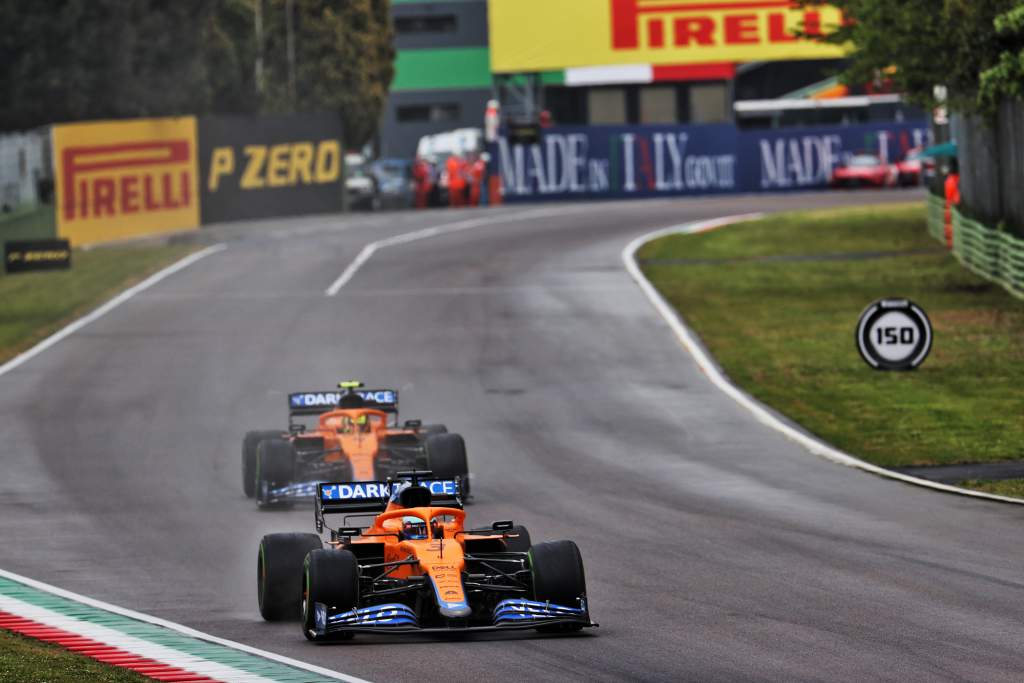 From that fifth position, he gained fourth during the round of pitstops when the field changed to slicks thanks to Perez’s 10-second penalty, and moved to third when Lewis Hamilton had his off at Tosa.

While it was always likely Hamilton would catch and pass him after the red-flag restart, which eventually happened with just under four laps remaining, Norris overtook Charles Leclerc when the race resumed to make sure of a podium finish.

His qualifying pace translated into race pace as both in the first part of the race and, after the restart, he left Ricciardo behind with a 27.5s gap between them at the chequered flag. While ostensibly it was a similar story in Bahrain, that did not create a fair comparison as after Norris got ahead on the opening lap, Ricciardo suffered damage to the left-rear of his diffuser after being hit by Gasly, which contributed to his pace and, most significantly, tyre management problems.

Despite his relatively light-hearted persona, Norris is increasingly serious about his craft as a grand prix driver and has been working hard to raise his game. He’s well aware of the scale of the challenge he faces with Ricciardo and while the Australian will get stronger, it was always essential that Norris capitalised on being the incumbent McLaren driver to start well in comparison. 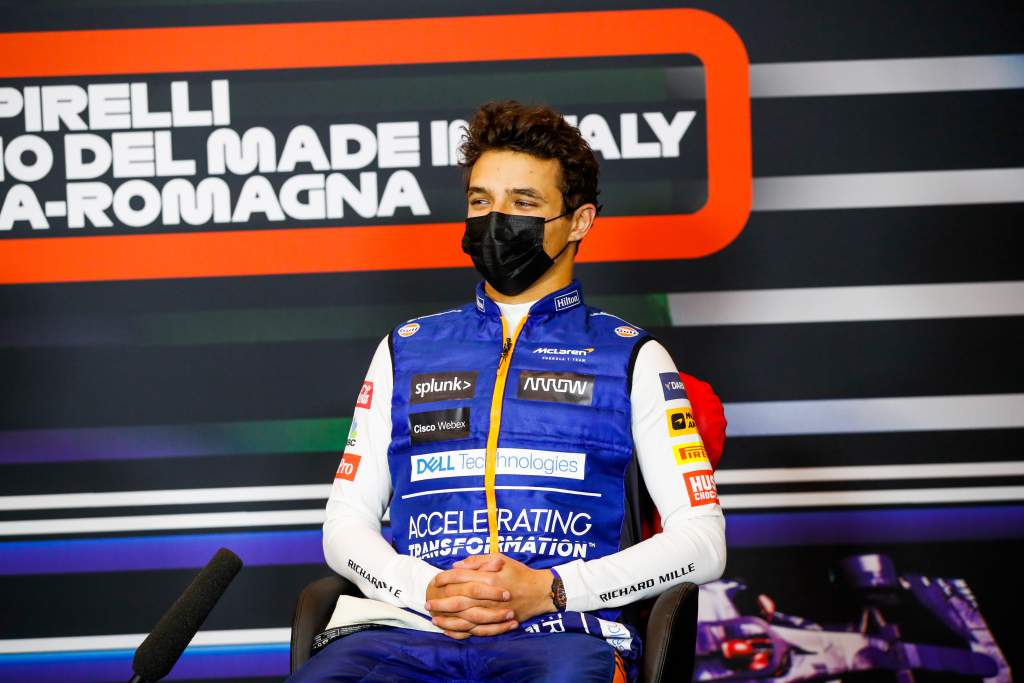 He has done that, with the main challenge now to ensure he delivers consistently. He has always produced strong performances in fits and starts during his F1 career, stretching all the way back to his debut in Australia in 2019 when he reached Q3, but delivering weekend-in, weekend-out, is essential.

If you include his strong run to fifth in the Abu Dhabi season-finale last year, he has been best-of-the-rest in the last three races, which is exactly the kind of consistency the team wants to see from him. Last year, he was tasked with being more aggressive when necessary with mixed results, but he’s developing into a driver who knows when to attack and when to consolidate, as you’d expect for a driver starting his third season.

“Results like the ones he had in Bahrain and Imola was a great confirmation for himself that he is heading in the in the right direction,” said Seidl when asked by The Race how Norris has made the next step.

“The most obvious thing for me is the laptimes he’s putting in consistently, which is the most important thing for me because if these laptimes don’t come, I can’t fix it, it has to come from these guys.

“But in the end these laptimes are also result of the hard work he has put in together with his team, together with our engineering team over winter in order to learn from his second season in Formula 1, in order to digest it in the right way and make the right conclusions and come back this year clearly being in a position to make the next step.” 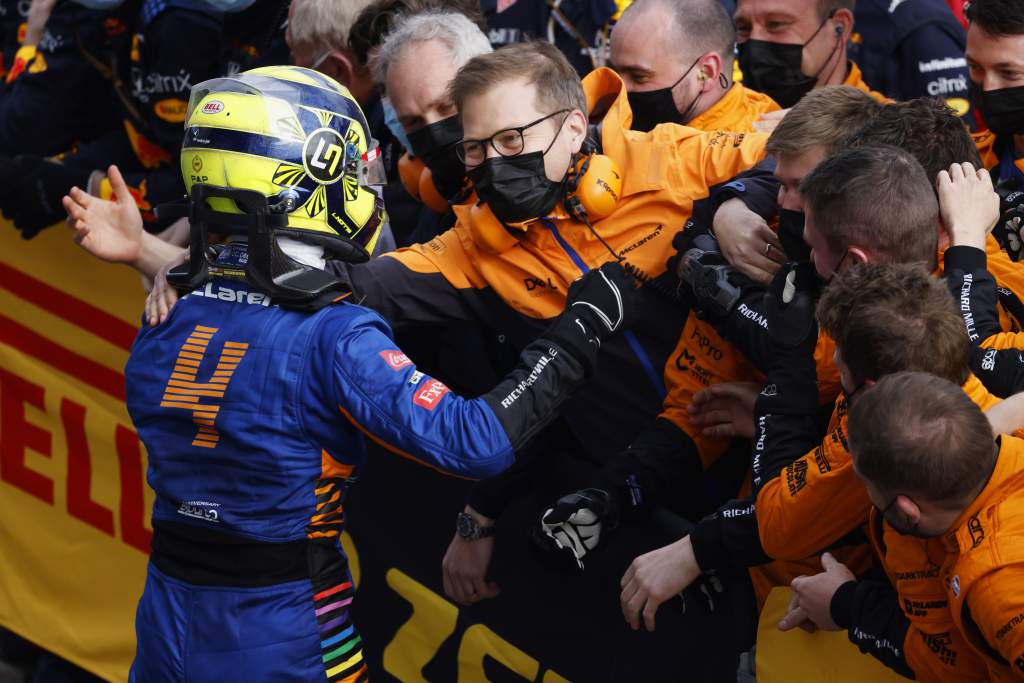 Norris has been working hard to broaden his driving style and talked after the Bahrain GP about learning from Ricciardo’s approach, which he argued was better suited to the characteristics of the 2021 McLaren. This should help him to be more adaptable and improve that consistency.

As Seidl says, the results will also help confirm to Norris how good he is. While occasionally drivers come into F1 with an unshakable sense of confidence and self-belief, the majority take a little time to build that and Norris has proved to himself, as well as everyone else, that he can perform at a high level in F1 and, albeit based only on a small sample size, do so with improved consistency. That, combined with growing maturity – it’s important to remember he’s still only 21 – should allow him to make further gains.

“I can clearly see that also in terms of personality, character that he made the next step, which is also normal for these young guys,” said Seidl. “It’s also what you would expect from these guys, because they need to make the steps in their early years if they want to become top drivers.

“I’m obviously very, very happy with what I’ve seen so far from Lando, this year. And it’s important now to pull this off, like the first two races weekend by weekend, which is a big challenge for Formula 1 driver because the season is very, very intense. 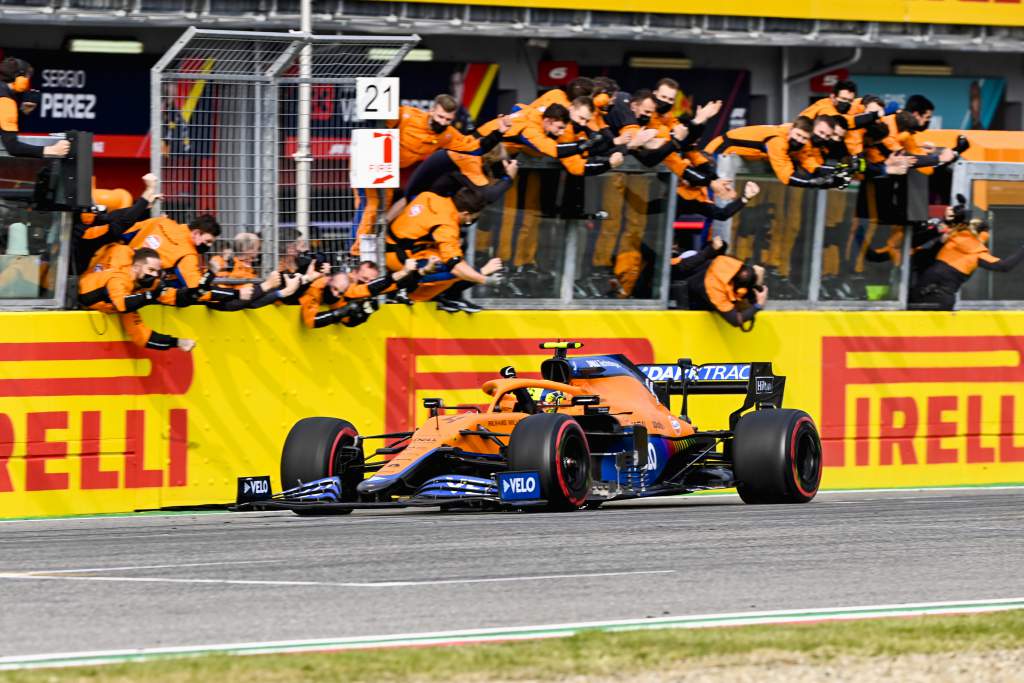 “Also, the sun is not always shining. They will always have these great moments that we could experience these first weekends, then it’s important to stay focused, keep the positivity up, the energy level up and put it off again, next session when you jump in the car.” 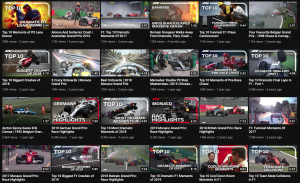 Norris has made a very positive start to the season, but Seidl is correct that Norris must repeat this not just over two or three race weekends, but over the full season.

It won’t be long before Ricciardo is on top of the McLaren and at his best and at that point Norris will face an even sterner challenge. Who knows, perhaps a fully-integrated Ricciardo would have accessed performance in the car that Norris couldn’t?

But by hitting the ground running in 2021, Norris at least ensured that he’s in the best position to be measured against Ricciardo later in the year.