The changes, introduced in response to the financial problems caused by the COVID-19 pandemic, were approved unanimously in an e-vote of the WMSC.

The FIA has also defined the notional values for transferable components to ensure teams do not benefit from advantageous deals in relation to the cost cap when acquiring such components, while still preventing smaller teams from establishing the ability to design, develop and manufacture such components. 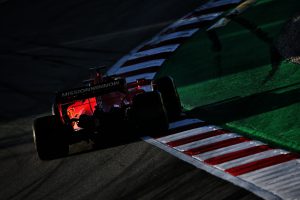 The FIA also states this will prevent project “flipping”, whereby a small team designs and supplies a larger one with components for a cost cap advantage by setting a notional price.

The rules forcing teams to carry their 2020 cars over into 2021 is also enshrined in an extensive list of components that are frozen, including the chassis and gearbox as well as mechanical components and impact structures.

To allow some modifications, with McLaren in particular needing to make changes to adapt from Renault to Mercedes engines, a token system has been created to allow a limited number of tweaks. Related to this is a limit on the number of power unit upgrades in 2020.

Rules simplifying the floor ahead of the rear tyres to moderate the increase in downforce next year have likewise been improved, which also modify the plan-view trim.

The minimum weight is also increased by 3kg to 749kg amid concerns about costly materials being used for savings.

The reduction in permitted aerodynamic testing (ATR) and the introduction of power unit test bench restrictions have been approved.

For 2021, there is a further reduction in testing as well as the introduction of a weighted allowance for windtunnel/CFD testing that favours teams in reverse order of championship position.

On the engine side, a limit on the number of new specifications of major engine components that can be introduced each season has been approved, alongside new dyno restrictions for 2020.

Changes to the sporting regulations to allow behind-closed doors races to be run have also been approved, along with various provisions to allow race weekends to be tweaked.

Events can now either be designated “closed” or “open”, with different restrictions on personnel in the paddock depending on whether spectators attend.

Tyre testing during Free Practice 2 is now possible in case Pirelli needs to trial a new specification tyres, and there is an allowance to extend the use of the first set of tyres used in P1 if FP1 is wet.

Changes have been made for 2022 covering the personnel curfew, restricted-number components, scrutineering and parc ferme. These are connected to the 2022 technical regulations.

There have been some detail changes to the financial regulations related to what is exempted from the budget cap.

This includes raising the year-end bonus exclusion cap for exceptional results from $10m to $12m and also includes related taxes.

Costs for staff entertainment that are excluded are capped at $1m, while various schemes for employee well-being – medical programmes such as vaccinations, eye tests and hearing tests – are also exempt.