Formula 1 drivers have been banned from wearing unofficial clothing post-race and on the podium, following Lewis Hamilton’s Tuscan Grand Prix T-shirt urging action over the death of Breonna Taylor.

F1 and the FIA have incorporated the championship’s #EndRacism and #WeRaceAsOne anti-racism messages into the pre-race build-up to support a global anti-racism movement that has gained prominence again in 2020.

It requires drivers to wear T-shirts with the #EndRacism slogan as part of a pre-race mini-ceremony, though Hamilton has been permitted to wear one with Black Lives Matter on the chest. 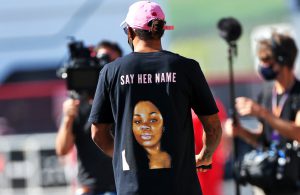 At Mugello two weeks ago, Hamilton instead wore a T-shirt pre-race and post-race, including on the podium, referencing the killing of emergency medical technician Taylor in the United States with the words “Arrest the cops who killed Breonna Taylor” on the front and “Say her name” plus a photo of her on the back.

The FIA’s statutes contain no reference to what drivers can or cannot do or say in such specific terms and the only explicit demand relates to non-political messaging on the car itself.

However, the governing body was keen to clarify what it views as acceptable post-race because some viewed what Hamilton did as a political act that crossed the line, and Hamilton said he expected something to be done to stop a repeat.

The FIA has now communicated that F1 drivers must now remain in ‘done up’ race suits and team uniform “only” through the entire official post-race procedure.

For the duration of the podium ceremony and post-race interview process, the drivers finishing in race in the top three “must remain attired only in their driving suits, ‘done up’ to the neck, not opened to the waist”.

For the duration of the TV pen interviews and post-race press conference, every driver who finishes the race “must remain attired in their respective teams’ uniform only”.

“Ultimately the world, and the younger generation in particular, are more conscious that things aren’t equal and change is needed” :: Lewis Hamilton

On Thursday, before the FIA’s plan was known, Hamilton said he did not “regret” anything he did and would not be “stopped” from his desire to use F1 to raise awareness of issues he views are important – indicating he will find other ways to do so depending on what the FIA decreed.

He also said he recognised that the FIA has “certain limits that they feel that they have to work within” and were “trying to make everyone happy”. 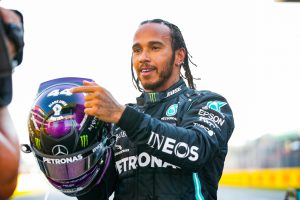 “This is a learning process for everyone, because people have been happy with the norm here, with how life and society has operated,” said Hamilton.

“But ultimately the world, and the younger generation in particular, are more conscious that things aren’t equal and change is needed.

“It does take conversations with people, and things like Mugello happening, for people to spark a conversation that would perhaps never have taken place if it didn’t happen.

“We will just try to continue to work with them, whether or not I agree or disagree is kind of irrelevant. It’s just trying to find a common ground on how we can do it together, maybe.

“Do I believe that they fully understand? I don’t know. But perhaps in the future, we all will to the same extent.”