All drivers tested two sets of the prototype tyres featuring a modified rear construction during free practice for last weekend’s Austrian Grand Prix, and following today’s meeting an FIA statement confirmed that “the world council approved the introduction of a new construction of rear tyre for the remainder of the 2021 season”.

The front tyres and the compounds used on both axles remain unchanged, but the modified rear construction features higher cornering stiffness at high loads, and a higher vertical stiffness.

This means it can run at lower pressures than the regular rears, with the minimum starting pressure set 2psi lower for the prototypes in Austria than the standard tyres.

Pirelli has not confirmed the starting pressure minimums for next weekend’s British Grand Prix, but did say in Austria that the expectation is it would be 2psi lower than what would have been set for the previous specification of rear tyres. 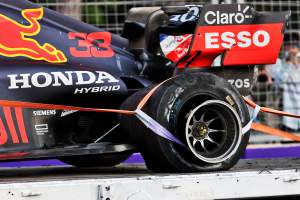 The new tyres were based on knowledge gathered during testing of the 2021 prototype tyres last year and also incorporated learnings from Pirelli’s testing programme for the new rubber to run on the 18-inch wheelrims next year.

This meant that Pirelli was able to produce the tyres, which had already gone through some indoor testing, rapidly in time for testing and then use from the British Grand Prix onwards.

The decision to introduce the new tyres is a result of the failures suffered by Max Verstappen’s Red Bull and Lance Stroll’s Aston Martin in June’s Azerbaijan Grand Prix. The new tyres are more robust and therefore safer.

As testing at the Red Bull Ring – using the modified rear tyres of the C4 compound that was designated as the medium for that event – went well, Pirelli was confident that analysis of the data after practice would lead to confirmation the modified tyres could be used.

Speaking in Austria, Isola said that the feedback received by the teams suggested the modified rear tyres were behaving in a similar way to the existing ones, which was in line with Pirelli’s expectations.

“The general feedback that I collected is that the proto is behaving in a very similar way compared to the C4 compound baseline,” said Isola.

“The feedback from drivers was positive. Some found a bit more traction in the first laps, and some commented that the new prototype is very similar to the current C4.

“But at the end of the day it was the target, because we know that the new construction is more robust but we didn’t want to change the behaviour and the balance or to ask the teams to make any set-up adjustment when they move to the new construction.

“That was confirmed in general.”

Those drivers who have been asked about the tyres have echoed Isola’s position, with none of the complaints that traditionally accompany the testing of prototype tyres surfacing.

Isola had also confirmed that the initial verbal feedback indicated the modified construction, as expected, had not affected the aerodynamic impact of the tyres.

While the sidewall is stiffer, the reduced pressure compensated for this and ensured there was no significant change there either aerodynamically or mechanically.