Ferrari’s updates and a 2021 trial explained

Ferrari has continued its recent push to make its 2020 Formula 1 car more competitive, with a view to getting to the front of the midfield pack.

The latest addition to the package is a modified diffuser, which can be a powerful component as it attempts to improve the rear-end downforce that has been a limitation this year.

We haven’t seen enough to judge if the performance has improved, but Ferrari is at least trying to make progress as it recovers from a difficult run of results.

Ferrari has been working right through the car, but the main objective has been to get the diffuser working more efficiently and more consistently.

From day one, Sebastian Vettel has been struggling with the stability of the rear end of the car. Charles Leclerc hasn’t had as big a problem, but that doesn’t mean that if they can make the rear more stable under braking and corner entry that he won’t be faster. 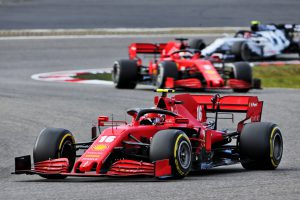 The detail around the diffuser is quite incredible. The small fins at the bottom of the vertical turning vanes (marked in red inside the yellow circle) all set up small vortices which make the vertical vanes influence the airflow lower than the regulations allow. Basically, the vortex increases the length of the turning vanes.

On the inner part of the diffuser at its lowest part, there are five very small vortex generators marked in green on the image above, which were in evidence on both the old and new versions. Basically, this is the lowest part of the underfloor and when this area gets close to the ground it stalls which reduces drag. However the difficult part is getting the re-attachment to be more or less instant when the driver hits the brakes. Achieving this is critical to rear end stability. These vortex generators will improve this but might not entirely eliminate it.

The area circled in blue is multi-slotted to try to allow the low pressure area behind the rear tyre to improve the function of the diffuser. I say function because it’s different from efficiency. Getting all this all working together will generate more downforce but as the rear wheels and tyre are a major percentage of the car’s drag it won’t do much to reduce the drag.

A bigger diffuser means more downforce but it can instigate rear end instability and that’s one of Ferrari’s biggest problems, especially for Vettel.

Sebastian Vettel ran a new floor on Friday that is an evaluation part for the modification of the floor regulations for 2021.

This change in regulations eliminates the detail at the sides of the floor in front of the rear tyres in an attempt to keep downforce levels from rising beyond what the current Pirelli tyres can cope with. We have to remember that these tyres will be a carry over for a third season in 2021.

It’s a bit like going back in time. Over the last few years the development direction has always been in the louvre and slot detail on the outboard edge of the floor but Ferrari has bucked that trend and created a turned up section in this area (see green highlight).

The common design of louvres on the outer edge of the floor works in conjunction with the vortex rotation that is set up with the bargeboards. If this can be made to all work together this vortex pulls airflow through the louvres and works like a skirt helping to seal the airflow from being pulled into the low pressure area of the underfloor.

Going the direction they have may create a more stable underfloor aero map but not without potentially losing overall downforce. I say potentially because what they currently have might not have been working as well as it should have been. This quick back to back with a trial part for next year will at least confirm or deny that potential problem.

Ferrari has said it is continuing with its development plan with this year’s car and there are many other new parts for this race in Portugal which we will bring you information about their success (or not) as the weekend progresses. But when you consider that this is a new track that Formula 1 has not run at yet, bringing experimental parts might be a little bit of a gamble and prove difficult to get the best from while coming to terms with just the general set up compromises that any new track dictates.

Ferrari has also altered its cooling exits. It has added a panel to separate the airflow before it hits the rear top wishbone.

Anything that can be done to optimise the airflow anywhere on the car, be it on the external surface or the underbody surfaces, will make the car more efficient. More efficient cooling means the car needs less mass flow going through the radiators.

If small details like this can increase the airspeed going through the underbody cooling areas, then the cooling will be better and the amount of mass flow left to generate overall downforce will also be increased. So, basically, better cooling and more downforce.

The bargeboards are without a doubt the most complicated and intricate aerodynamic area of a current F1 car. Ferrari introduced a modified version at the Nurburgring, which it is continuing to evaluate in Portugal.

This bunch of components probably costs more to research and manufacturer than our entire 1991 Jordan! If anyone wants to save money for the F1 teams than this is the area to focus on and it is at least being tidied up in the new technical regulations for 2022.

That said, it is a very powerful area aerodynamically and depending on the team it could be responsible for in excess of 25% of the car’s overall downforce.

All these vanes act as vortex generators and twist and turn the airflow, which in turn helps the performance of the front wing, the underfloor and the diffuser.

Each one is twisted to optimise its airflow across its span, be that horizontally or vertically. The longer horizontal wing sections coming out from the sides of the chassis are there to pick up the airflow coming off the trailing edge of the front wing. Together with the front wishbones they re-align this flow as best possible to improve the performance of the leading edge of the floor. That seems a fairly stupid thing to say as not much in this picture is horizontal or vertical!

This picture above shows where the airflow is being pulled out from underneath the chassis. Extracting this airflow from under the chassis has a major influence on the front wing’s performance.

This turned-up section on the outer edge of the floor, together with the slot gap and upper flap (all in green area) , acts as a small diffuser in its own right. Working with the blue circled section of the bargeboards generates a fair amount of underfloor downforce right in the middle of the car which is exactly where you want it.