The Race has learned further details about the Ferrari SF21 since its online launch earlier on Wednesday.

The re-engineered rear end has been made on the basis of trying to emulate as closely as possible what Mercedes did with its rear suspension layout last year – but within the limitation of 2021’s two-token upgrade limit from each team’s 2020 car.

Switching to such a layout from Ferrari’s conventional 2020 suspension is quite a feat of ingenuity as it would normally require changes to both the gearbox and the rear crash structure – which would incur more than the permitted two-token development spend. 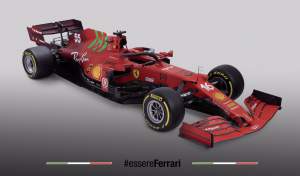 Ferrari has managed to achieve much the same effect with just a gearbox casing change. The crash structure remains as was.

The big innovation of last year’s Mercedes was to reverse the lower rear wishbone so that what had been the heavily-forwarded angled front leg became a heavily-angled rear leg.

This had the effect of sweeping the whole suspension back to create more volume for the airflow in the very powerful area between the rear wheel and lower bodywork. The benefits of that were arguably made even greater this year when the regulation restrictions were made to the rear floor area to reduce downforce.

Because of the two token limits Ferrari has not been able to do it in quite the same way as Mercedes. So instead of mounting the rear leg into the crash structure – which was the Mercedes solution – Ferrari has instead created a longer gearbox casing stretching back into that area and mounted the suspension leg onto that – still much further back than before but without being mounted onto the crash structure. 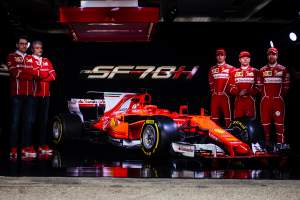 Spending the tokens on a gearbox change has allowed Ferrari to make a further significant change. The differential has been raised so as to create deeper side channels in that aerodynamically-sensitive area. The new casing incorporates that change too.

Regarding the power unit, gains in excess of 20bhp have been made though that would still appear to leave it some way short of reclaiming the power that was lost to the 2020 tec directives.

The power unit retains a conventional combined turbine/compressor at the back of the engine and is not a Mercedes/Honda-style split turbo. The intercooler has been re-sited however and this has enabled the tighter contours of the engine cover.