A revised turbocharger in Ferrari’s Formula 1 engine, new gearbox and new rear suspension are the team’s main changes for its overhauled SF21 car.

Ferrari is seeking to bounce back from a terrible 2020 season that was ruined by the performance loss it suffered making changes to its engine design to conform to new FIA technical directives relating to fuel-flow and oil burning restrictions.

It was not able to upgrade its engine during 2020 as F1 introduced an engine freeze, so instead devoted its development resource to significantly adapting its design for 2021.

Though Ferrari has not yet pursued a major architectural change like splitting the turbo and compressor – an option on the table for 2022, when engine specifications will be frozen for three years – it has worked “considerably” on the 2021 engine’s layout.

A revised turbo is the most eye-catching detail Ferrari has revealed so far, but it also enhanced its combustion engine, MGU-H and other elements within the energy recovery system.

Ferrari’s engine boss Enrico Gualtieri said the target was, along with the chassis designers, “to make the overall project for the car as efficient as possible”.

He said that development work from fuel and oil partner Shell had contributed an additional laptime gain of over one tenth of a second.

“We continuously worked on the internal combustion engine, aiming to increase its thermal efficiency,” he said.

“The turbo compressor has been revised to meet the needs of the motor and at the same time, we have planned to increase efficiency in the recovery of exhaust fumes.

“We’re also working on the hybrid system on the electronic part, trying to revise all its components and optimising them. 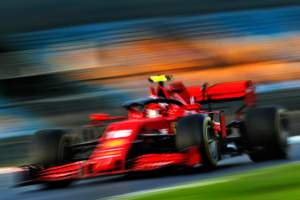 “The engine was born out of all of this. It has been teamwork, we have all worked together, including our excellent technical partners and our whole set of suppliers.

“We have put enormous energy into this project, but at the same time we’re already working hard on the power unit for 2022.

“It will debut next year, and it will be even more important because it will be with us for at least three more years of races.”

Alongside the revised engine is a new gearbox and rear suspension. This includes Ferrari’s permitted development token spend.

Ferrari’s chassis chief Enrico Cardile said that was swiftly chosen to be Ferrari’s focus point for a “radical change”.

“This, along with the work done by our power unit engineers, gave us a much more tapered rear end compared to the SF1000,” he said. 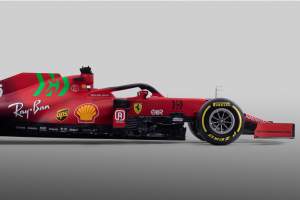 “We also went over the cooling system, we increased the authority of the central radiator, and designed a more down-washing bodywork.”

Cardile said Ferrari’s focus has been to recover the aerodynamic performance lost by the new rules for 2021 that cut away part of the floor and restricted/eliminated other downforce-generating elements, and also to reduce drag.

The latter was a contributing factor to its poor 2020 performance as the downforce/drag ratio was misjudged following the loss of power from last year’s engine.

As Ferrari has spent its development tokens at the rear of the car, its front end is very similar to the SF1000 – although aerodynamic freedom means it has developed a new front wing and introduced a new nose within the limits of not requiring a new crash structure, which would have necessitated a token spend.