The FIA is satisfied Ferrari’s use of two different floors in a recent Formula 1 tyre test was legitimate after rivals queried the matter ahead of the Miami Grand Prix.

Ferrari took part in a Pirelli test at Imola after the Emilia Romagna Grand Prix.

Images emerged of the F1-75 running two different floors over the course of the day, which prompted speculation Ferrari had been evaluating different components.

F1’s sporting regulations dictate that new car components cannot be used during tyre testing, stating that “cars at these tests must only use components of a specification that have been used in at least one race or TCC [test] during the current championship year”.

To qualify as having been used at one race, the part must simply have been used on track at some point of an event, including practice sessions.

The rules also prevent component changes during the test that “give any sort of information to the competitor that is unrelated to the tyre test”.

Set-up or component changes are only permitted when agreed in advance with Pirelli as part of the tyre evaluation procedure.

This means a team is not permitted to back-to-back different component specifications to gather data for their own purposes, even if they have been previously used.

As a result, at least one team was known to have challenged the FIA on whether Ferrari had broken the rules at Imola. 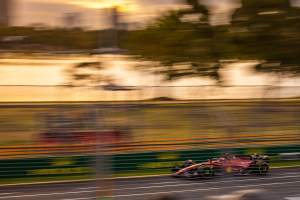 However, The Race understands that the FIA looked into the matter and determined that Ferrari had only changed components because the car suffered floor damage in the morning.

It had also been wrongly speculated that one of the floors Ferrari used was a development item that previously appeared in Australia.

This is believed to be incorrect. Ferrari used its floor from the Emilia Romagna GP and an older specification of floor that had been used during the pre-season test in Bahrain.

The updated floor from Australia was a packer that changed the shape of the diffuser and was run in Friday practice.

Ferrari is expected to introduce the real version of that development soon, but this had nothing to do with its component swap at the Imola test.