When Juan Pablo Montoya’s shock switch from Formula 1 to NASCAR came to fruition in mid-2006, all of us working on motor racing newsdesks were very grateful for the 2003 car swap test between Montoya/Williams and Jeff Gordon/Hendrick Motorsports that had given us a load of usefully prescient pictures of Montoya in a NASCAR Cup racer.

…but not that close. 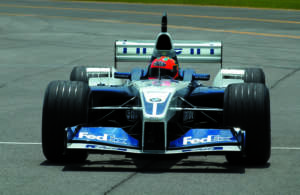 Gordon’s discussion of his F1 chances on the official F1 podcast this week was a really endearing listen. So many of those car swap tests generate fleeting positive noises from participants then are swiftly forgotten by all involved.

The fact four-time NASCAR champion Gordon – then very much at his peak – surprised himself so much with the F1 test that he gave the feasibility of trying to get on the grand prix grid the kind of realistic consideration that he did is a tribute to his character, open-mindedness and motorsport enthusiasm. His measured train of thought over the whole process, including the reasons he decided against seriously pursuing it, will be no surprise to a huge NASCAR fanbase that was attracted by his approach to the series as well as his driving.

Gordon’s tales of the F1 world’s attempts to lure him are more underwhelming. It felt like more stories of F1 only being interested in the wider motorsport world when it thinks it has something to gain from it.

Some of the approaches by Bernie Ecclestone, Jacques Villeneuve on BAR’s behalf, Williams and Jaguar would’ve come from the right place and with sincere intentions and a deeper plan. Others less so.

“It probably was, more than anything, did I have any money to bring to Formula 1 and did I want to be a Formula 1 driver?” was probably Gordon’s most revealing line.

And in light of F1’s recent declaration of new efforts to get American drivers on the grid, the tone felt depressingly familiar. It underlined that F1’s been trying to lure US racers for over two decades, and its approach feels like it’s changed little over that time. Being kind, you’d say it falls short of what’s required. Being blunt, you’d call it patronising lip-service.

You can see the offers Gordon got as stereotypically cynical F1 folk saying ‘of course you should drop your hugely successful career elsewhere to run around in our midfield for our commercial benefit’.

The irony is that the big stars of other motorsport genres (whether it’s Gordon, a rally legend like Sebastien Loeb or MotoGP’s ultimate mega-star Valentino Rossi) are often so impressed with the actual F1 machinery in car swap tests that they really do get tempted. It’s the reality of what it would take to make the genre transition viable that’s either disregarded in the naive opportunistic offers or just halts the process before it comes to fruition.

The best of Gordon’s offers was the possible route via European junior single-seater testing and a Team Green CART drive (Gordon arriving in that series at the height of his fame might’ve tipped the scales in the US single-seater war, hadn’t it? Or at least accelerated CART/IRL reunification) to an eventual BAR F1 race seat. That at least showed more awareness of the scale of the task at hand.

And would even that, even in an era of unlimited testing, have been sufficient to get Gordon up to F1 pace given his racing education up to that point had been so drastically different?

As appealing and admirable as motorsport genre crossovers are, few actually work in the modern era as series-specific demands get ever more precise and specialised. If F1 needs a star from an untapped region, parachuting one in from a different series is unlikely to be the answer. 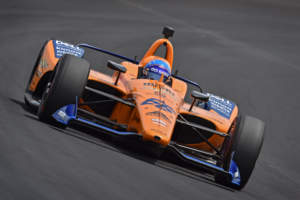 Despite all Fernando Alonso’s ability and work ethic, two of his three Indianapolis 500 bids were failures. He only starred when his equipment was spectacularly right. That’s no slight on him, it just showed the scale of the task he’d boldly taken on.

Takuma Sato has gone from F1 to being an Indy 500 winning oval master, but it took years of misadventures to get there. Sato’s trajectory is worth Romain Grosjean bearing in mind as he ponders adding the ovals to his IndyCar diary.

Jimmie Johnson coming to IndyCar at the age of 45 is wonderful and courageous, and his approach is all humility. But it’s painful to watch a driver of his talent and pedigree looking so far from in command of his car this season.

The logical alternative to trying to poach an established top name from elsewhere to solve a representation shortage is a homegrown programme to develop talents from that area.

Around the time F1 teams were dangling carrots in front of Gordon, the then-young Red Bull F1 project was making America a concerted part of its ambitions. It then demonstrated the risk of a structured driver search and ‘meritocracy with a helping hand’ strategy: if your final chosen one underperforms and then has a catastrophic falling out with their boss, as Scott Speed did at Toro Rosso, the whole project can stall.

Of course F1’s only American racer of the 2010s – Alexander Rossi – took an ‘organic’ solo route up the European junior ladder to that chance, then swiftly realised far more fulfilling opportunities were open to him in his homeland. He didn’t need a team or F1 itself to steer his path to the pinnacle. He just needed the pinnacle to offer him a moderately competitive car.

If all Ross Brawn and co’s competitive ambitions for F1’s new tech rules/cost-capped era come to fruition (a big ‘if’ right now), tales like Rossi’s won’t be so common.

But the echoes of Stefano Domenicali’s recent comments about American drivers in Gordon’s tales of half-hearted interest just show how much F1 needs new ideas and more focused efforts when it comes to US talent or any other representation concern.