Perez scored his second win of the season after fending off Ferrari’s Charles Leclerc in a tricky final stint on slicks after most of the race was spent on intermediates. 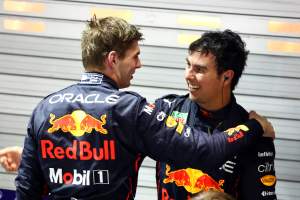 The stewards noted during the grand prix, though, that Perez would be investigated for an alleged safety car infringement. This was completed after a lengthy period and communicated as two separate decisions.

In the first, the stewards said Perez dropped more than 10 car lengths behind the safety car before he was allowed to between the exit of Turn 13 and Turn 14.

The stewards said that just because “the track was wet in parts, we do not accept that the conditions were such as to make it impossible or dangerous for Perez to have maintained the required less than 10 car length gap”.

However, taking into account “the wet conditions and the difficulties highlighted by Perez as mitigatory circumstances for this incident”, the stewards decided it only merited a reprimand.

But in an immediate follow-up document, Perez was awarded a five-second penalty for a second, separate incident – although as he won by 7.5s this does not impact the result.

The stewards said in the second instance, Perez failed to keep within 10 car lengths of the safety car between Turn 13 and Turn 14 – despite the race director warning Red Bull that Perez was not respecting that rule between Turns 9 and 10, and that warning being relayed to Perez.

This suggests there were at least three instances Perez failed to follow the rule: a first offence that earned a reprimand, a second that prompted a warning in-race, and the third outlined here. 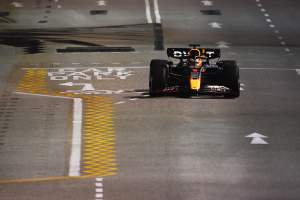 The stewards, therefore, felt that failing to stay within 10 car lengths of the safety car yet again, after an “express warning” from the race director, merited a five-second penalty.

Perez had expressed confidence after the race that there was nothing in it.

“Bit of a miscommunication there. I think these conditions are not normal so it’s fully understandable.

“These conditions we were facing, especially the final sector, were super tricky.

“So I do expect no further action, the stewards were pleased with my explanation and they understood it.”

Ferrari had indicated it expected Perez to be punished with a five-second penalty.

“We believe that’s an infringement,” Binotto said after the race to Sky Sports F1.

“The last time it happened, which I think was [Antonio] Giovinazzi in 2020, it has been a five-second penalty.

“But we are not there, we did not participate in the summons, it’s difficult for us to judge.

“We wait and hopefully it can change the result of the day.”