Netflix’s Drive to Survive has been hugely successful in drawing new fans into Formula 1 and telling the behind-the-scenes stories in a very different way to what we’ve seen historically. And long may it continue to do so.

But that does not mean it is perfect. There has been legitimate criticism of some of the liberties taken in terms of the narrative presented, and this is a slippery slope F1 must be wary of.

Drive to Survive neither needs to be a dour, straightforward retelling of the season, nor pander only to the existing fanbase. But it is presented as a documentary series and is therefore essential that it presents reality rather than offering the creative interpretations more often associated with trashier forms of reality TV. 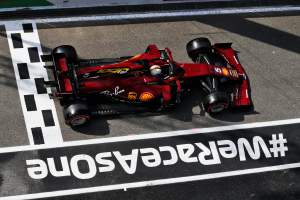 Given the artistic licence used so far has been relatively mild, many in F1 accept any distortion as a necessary evil. Want to tell a story about 2020 McLaren pairing Lando Norris and Carlos Sainz Jr? Then why not create some fictional needle?

As McLaren’s Zak Brown put it last month when questioned about the portrayal of his 2020 drivers’ relationship, it’s all about drawing in new fans, so what’s the problem?

“Netflix has been great for Formula 1,” said Brown. “The primary goal of Netflix is to entertain and bring new viewers to Formula 1 and it’s accomplished that tenfold, which I think is great.

“Top Gun you watched and I’m sure every fighter pilot went ‘you can’t do that in a jet’ but it was a great movie.

“Of course, all of us know living in the sport know that Carlos and Lando had a great relationship and there wasn’t the tension portrayed there.

“But I think any time you get into a television show they are going to create some entertainment that we all in the paddock know maybe wasn’t quite like that.

“I think that’s OK and what’s most important, and is the wonderful thing, is to bring in new fans around the world.

“So we’re very supportive of Netflix and what they are trying to accomplish even if they take a little bit of creative licence here and there.”

The Top Gun analogy would only hold water if Drive to Survive were a fiction based on F1. Norris and Sainz aren’t actors, F1 is not scripted, they are real people and situations and should be represented accordingly. That doesn’t mean it has to be mundane and it’s right to focus on the most dramatic storylines, but why distort them?

Yes, the makers of Drive to Survive must choose to emphasise certain parts of the dynamic and select the story they tell, but it’s a dangerous precedent to fabricate something from whole cloth. This is, after all, presented as reality and, what’s more, is something that exists and is covered extensively outside of the TV show. That’s one of the things that makes it different to reality TV. 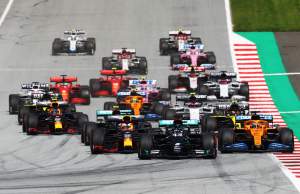 Secondly, if F1 wants to draw in new fans it should show them respect. Cheap tricks to make F1 more appealing and engaging aren’t an honest way to draw people in, even if you subscribe to the ‘what’s the harm?’ argument when it comes to how the Norris/Sainz rivalry was portrayed.

It shows a lack of respect for the new fans who are considered to be so important. If you want to get people drawn in by Drive to Survive through the door, do it the right way.

It also indicates a lack of confidence in F1 as a product. There’s plenty going on to make a broad-appeal and popular 10-episode season without relying on such tricks, but if those involved in F1 believe that they are necessary, what does that say about how its output is perceived internally?

Such distortions could also prove to be the thin end of the wedge. At a time when F1 is working hard to expand its appeal, how great is the temptation to amplify storylines a little more next time?

The Norris/Sainz narrative is far from an isolated case. There are plenty of other narrative tricks pulled on a variety of scales, from in-car radio used at misleading times – for example, Norris celebrating a supposedly brilliant lap in testing – to cuts that juxtapose footage from very different weekends.

Sometimes, it’s necessary to do this kind of thing because you don’t always have the footage you need, but if it’s being used to weave false narratives, that’s questionable.

The objective should be to deviate as little as possible from the reality, and only do so when there’s no alternative. Given limited time, things will have to be simplified, you can’t track every twist and turn, but that doesn’t prevent you being guided by the facts.

At a time when sporting properties like F1 are trying to control more and more of their own storytelling, this is a dangerous direction to go down for the fans consuming it. Sport appeals precisely because it is real. For all the artificialities, what happens is based on real people acting in authentic ways and that’s what makes it so fascinating. 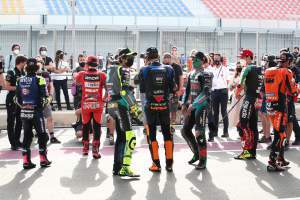 But if you look at things only in commercial terms, seeing only the extra eyeballs and potentially extra income that results from it, then F1 risks getting lost. It’s essential not just to care not only about the bottom line, but also about curating grand prix racing. Drive to Survive is part of that output and it should not be serving up fiction.

When it comes to outreach, F1 should back its product. It’s a fascinating championship full of interesting characters, authentic rivalries, great storylines and flashpoints. Rather than trying to create new ones, this is what the bedrock of its popularity should be.

Most importantly, if you do get some new fans through the door via Drive to Survive, it should not be done under false pretences. After all, if you are drawn in by a Norris v Sainz rivalry and subsequently discover it wasn’t really there, why have faith in anything else that you’ve seen?

That’s why causally accepting the need to “create some entertainment” is dangerous. You can make it engaging, exciting, appealing to those with little or no prior knowledge – but that doesn’t mean there isn’t a responsibility to be as authentic as possible. Drive to Survive has been able to do that in plenty of episodes.

And after all, if you have to create your entertainment, then isn’t that an acceptance that the reality of F1 is failing to do so?

Drive to Survive is a positive thing and the numbers indicate it has brought new people to F1. But it also has a responsibility to ensure that what it is drawing people to really is F1, rather than a distorted version of it that doesn’t really exist.