The Formula 1 rule that cost Kimi Raikkonen and Alfa Romeo a points finish in the Emilia Romagna Grand Prix could be altered after a “contradiction” was identified by the Imola stewards.

Raikkonen was hit with a 30-second penalty following the Imola race after taking the restart after the red flag in the wrong position.

The 2007 world champion had spun at the first chicane on the post-red flag formation lap and dropped from eighth to 10th.

Under Article 42.6 of the sporting regulations he needed to reclaim his position before the pitlane entry or return to the pitlane to take the restart from there.

That meant Article 42.12 – drivers aren’t allowed to overtake until the start-finish line – had to be followed, so Raikkonen was not allowed to reclaim his position.

The stewards admitted there was a “contradiction” in the rules as that meant Raikkonen was effectively stuck and had no choice but to return to the pits, which at the end of the formation lap would have ruined his race.

He didn’t do so because Alfa had radioed race director Michael Masi for clarification on what it should tell Raikkonen to do but the stewards said Masi had not had time to respond. 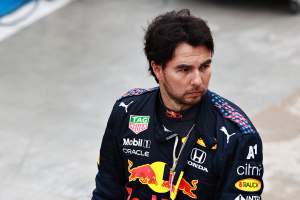 As Raikkonen therefore ignored the requirement under Article 42.6 to take the restart from the pits, the stewards felt obliged to hit Raikkonen with the mandatory but harsh 30-second penalty in lieu of the stop-go penalty that would have been handed out had it been awarded in the race.

Although the reason for the different punishments is because Perez breached specific safety car rules while in Raikkonen’s case different rules applied because it was during a race restart, there was a clear suggestion from the stewards that the rules needed to be simplified.

Auto Motor und Sport has reported that a change will be made for the upcoming Portuguese Grand Prix but The Race understands this is only under discussion and not yet agreed.

The idea is for Article 42.6 to only apply on formation laps at the beginning of the grand prix, which means if an incident like Raikkonen’s occurs again and a driver cannot reclaim their position in time for the restart they would be permitted to take the restart in their new position rather than have to return to the pitlane.

In-season rule changes require a ‘super majority’ of 28 votes from 30 representatives – the 10 teams and then 10 each for F1 and the FIA – plus World Motor Sport Council ratification to go ahead.

39 mins ago Rallycross No Comments