Pirelli’s 2021 homologated specification Formula 1 tyres were trialled by all drivers during Friday practice for the Bahrain Grand Prix and elicited a largely negative reaction.

Each driver had two sets of the C3 (medium) compound Pirellis alongside their regular allocation, with the next test scheduled for Friday practice in Abu Dhabi with a set of C4 rubber each.

But why has Pirelli designed new tyres, how big a change is it and what has led to claims by drivers that they are worse than the current specification?

Why have the tyres changed?

After teams voted unanimously not to use the tyres originally designed by Pirelli for 2020 following tests late last season, last year’s specification was carried into this year.

Given F1 was planning to introduce new technical regulations in 2021, including 18-inch wheerims and low-profile tyres, continuing with the 2019 Pirellis was a good solution for this year.

But the COVID-19 inspired delay to the new rules until 2022 means Pirelli’s 2019 specification would have to deal with cars putting greater load through the rubber than they were conceived for given the downforce gains next year.

While that concern is partly mitigated by a set of four aerodynamic rule changes that impact the floor, rear brake duct winglets and diffuser, there was also a need to modify the current tyres to deal with the greater loads – especially given the problems suffered in the British Grand Prix earlier this year when high wear led to tyre failures late in the race for both Mercedes drivers and McLaren’s Carlos Sainz Jr.

However, Pirelli has neither attempted to nor been officially asked to improve the performance with the 2021 tyres.

How have the tyres changed?

The tyre compounds are identical, but the construction of the tyres has changed both at front and rear. This is to increase the integrity of the tyres and also has the advantage of the much-criticised high starting pressure minimums being lowered.

For Friday practice in Bahrain, the front tyres were 1.5psi lower than for the regular tyres, with the rears 0.5psi lower.

The profile of the front tyres has also changed, although Pirelli decided to leave the rear tyre profile unchanged because of concerns about the sensitivity of rear floor behaviour to this characteristic.

Lewis Hamilton complained that the tyres were a second per lap slower and suggested that if this was the best Pirelli could do the 2020 specification should be carried over into next year.

Many other drivers also complained, including Alex Albon and Vettel.

This reaction is not a surprise, first because the cars are optimised for the 2020 tyres in their set-ups and therefore will not get the best from the 2021 rubber yet.

“Every time you propose a new tyre, there is a criticism” :: Mario Isola

Secondly, the drivers are collectively resolved to keep the pressure up on Pirelli to produce rubber that delivers performance and allows them to push.

So they are correct to say that the tyres feel worse as it’s inevitable this will be the case given the set-ups haven’t been reworked.

But given Pirelli did not attempt to improve the performance thanks to the unique circumstances of this season, it is incorrect to suggest there’s been any failure to make gains because that was not the objective. 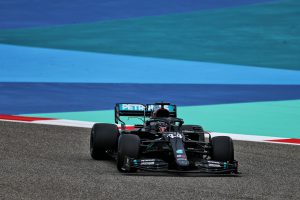 “Every time you propose a new tyre, there is a criticism,” says Pirelli’s head of F1 Mario Isola.

“There is a change in balance, for example. We warned the teams that with the new construction you can have understeer and invited the teams to correct the set-up in order to re-balance the car.

“This is obviously something they will do next year and they will find a way to balance the car and extract the performance from the 2021 tyres.

“But they have been focused today mainly on collecting data rather than extracting the performance from the tyre. And the driver feels the performance, not the other elements.

“It was a priority for the teams to collect tyre data because the front tyre profile is different.”

Are they really slower?

Several drivers suggested that the 2021 tyres were a second a lap slower and what we saw during Friday practice in Bahrain certainly supported this.

It came as a slight surprise to Pirelli given its simulation work and also the tests conducted on the Friday of the Portuguese Grand Prix, which was used to evaluate the full family of potential 2021 designs prior to the homologated specification being selected, suggested there was no loss.

However, it is expected that this will be clawed back once the cars are re-optimised to the new tyres even though Pirelli did attempt not to impact the balance compared to the 2020 rubber.

Pirelli also expects the overall pace of the car to be no slower next year despite the aerodynamic changes that will accompany the new tyres.

“In our development tests and also during the test in Portimao we didn’t find any difference in performance,” says Isola.

“Today I saw something in the range of 6-7 tenths of a second difference, but without any optimisation.

“Next year, they will have a different floor and they have some limitations in the aero package, so in the beginning they will lose something but they will recover during the year.”

Are the tyres really heavier?

Hamilton referred to the tyres as 3kg heavier for the whole set. The tyres have gained weight as a result of the changes to the construction, although Pirelli puts the increase at the fractionally lower figure of approximately 2.5kg per set.

The teams could unanimously vote against using the 2021 tyres, as they did with the original 2020 specification that was tested last year.

However, because the changes to the tyres have been made to improve the integrity, it’s possible that their use could be forced through on the grounds of safety.

“We did our job, we made a tyre that is more resistant” :: Mario Isola

What is clear is that Pirelli is determined that these tyres should be used next season.

“There is always a discussion every time we try to introduce something new – some people are not happy.

“There is a natural resistance to changes in F1 but I think we have a specification that is an improvement and there is no reason why we shouldn’t introduce it next year.”

Given the focus this year was expected to be on designing the low-profile tyres for use with the 18-inch wheelrims next year, the season started with no ongoing design work on the existing rubber.

But the extension of the rules for the current year gave Pirelli little room to manoeuvre given it has been impossible to run a test programme thanks to F1 effectively shutting up shop for three months before the season started then having a compressed racing calendar. So a fix to the current specification was the only option. 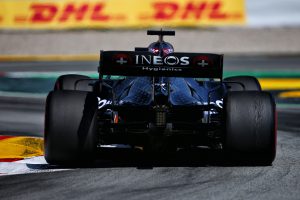 “We had no opportunities to test in 2020 other than half an hour in free practice,” says Isola. “We explained to the drivers that it was impossible to plan a development of a new project for 2021.

“Considering we are not changing the compounds, it is not possible to have a product that is a revolution.

“We agreed to target a higher level of integrity for the 2021 tyres and therefore we worked mainly on the constriction.

“This means that for next year the drivers cannot expect a product next year that is completely different from the current one.”

The Pirelli tyres for 2022 will be a completely different product for 18-inch wheelrims with the target letter – the set of parameters agreed for Pirelli to work towards – agreed with input from drivers.

The priority is to reduce the problems with overheating, which will allow drivers to push more consistently, as well as providing the high levels of performance expected of F1 cars.

Given the dramatic change to the cars, the tyres will be a complete change from the current ones – although by how much remains to be seen.

If that new family of tyres, which will feature all new compounds as well as construction, doesn’t live up to the target letter’s objectives, then justifiably the criticism will be far louder.