Dizzy Hamilton says ‘everything got blurry’ on podium

Mercedes Formula 1 driver Lewis Hamilton suffered from dizziness after the Hungarian Grand Prix and said “everything got a bit blurry on the podium”.

Hamilton recovered from falling to last place at the Hungaroring to finish third and take the lead of the championship, after title rival Max Verstappen finished 10th following a multi-car collision caused by Valtteri Bottas at the first corner.

The race was red-flagged after that crash, with Hamilton leading, but Mercedes made a mistake at the restart as Hamilton was the only driver not to pit for slicks – which meant he took the standing restart solo on intermediates and dropped to last when he pit at the end of his first lap post-restart.

Hamilton made two further stops on his way to finishing third, a recovery that included a fierce fight with Alpine’s Fernando Alonso, and post-race he was late to the usual media engagements while being treated by the team doctor.

The seven-time world champion said he was “just so exhausted afterwards” and said it was “one of the weirdest experiences I’ve had on the podium”.

“Real big dizziness and everything got a bit blurry on the podium,” he said. 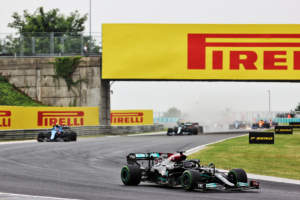 Wolff: Not pitting Hamilton ‘absolutely the right thing to do’
Read more

“I’ve been fighting all year really with staying healthy after what happened at the end of last year, and it’s a battle.”

That was a reference to Hamilton’s end-of-year positive COVID-19 diagnosis that forced him to miss the Sakhir Grand Prix.

He returned for the season finale in Abu Dhabi but was still suffering from some after-effects there.

Some who contract COVID-19 complain of symptoms for a long time afterwards and while Hamilton said he thinks it is “lingering” he admitted he had not spoken to anyone about it properly and did not know if that was his issue in Hungary.

“I remember the effects of when I had it, and I’m training different since then, and the levels of fatigue that you get is different, and it’s a real challenge,” he said.

“So just continuing to try and train and prepare the best way I can.

“Who knows what it is today. Maybe it’s hydration, I don’t know but I’ve definitely not had that experience.

“I had something similar like in Silverstone but this was way worse.”

The Hungarian GP is one of the toughest physical challenges of the year, with the race usually taking place with high ambient temperatures.

That was the case on Sunday despite the storm that surrounded the area and meant the race started in damp conditions.

Race winner Esteban Ocon said after one of Hamilton’s answers: “I’m just gonna jump on that, it was a really hard race.

“This track with the heat, the humidity, the corners and you get the combination, you don’t have a breather here.

“So, you need to really fight the car until the end.

“I feel flat, I feel completely dead as well, so it’s not that Lewis has a certain issue or not but I tell you I will have a good sleep tonight.”