Canadian GP fate in the balance amid cost and COVID concerns

Formula 1 says talks with the promoter of the Canadian Grand Prix are ongoing despite a report that Montreal health authorities have opted to stop the race happening.

Canada’s national public broadcaster, Radio-Canada, has reported that the Montreal round has been cancelled for a second year.

It claims that Montreal public health authorities “concluded that even behind closed doors without spectators, the risk of spreading COVID-19 during the Formula 1 event is too high”. 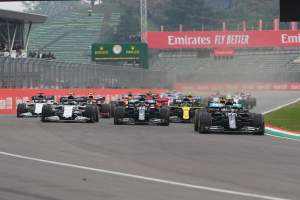 How the 2021 F1 calendar is already changing significantly
Read more

A 14-day mandatory quarantine is currently in place for any international arrivals in Quebec, and officials have so far remained steadfast this cannot be lifted for F1.

A bubble set-up like the one implemented in Abu Dhabi, where F1 personnel were only allowed to travel between hotels and the circuit confines, was suggested.

According to Radio-Canada, Montreal public health does not believe the requirement from the Quebec province to keep the risk of spreading COVID-19 to a minimum could be satisfied and has therefore “decided to cancel the event”.

But an F1 spokesperson told The Race: “We are continuing our discussions with the promoter in Canada and have no further comment.”

In addition to the public health requirements, F1 and the Canadian GP promoter have been seeking a solution to a likely financial deficit.

If the race were given the go-ahead locally, it would almost certainly have to happen without fans. Without ticket sales the promoter would likely be $5-6m short of what it must pay to F1 and had unsuccessfully sought to plug that gap with government funding.

Ruling out the race on health grounds would curtail any final attempts to negotiate a financial compromise anyway.

The Canadian GP would become the first to lose its place on the 2021 F1 calendar amid the ongoing pandemic.

Australia’s season opener was also affected but rescheduled to the end of the year. Other races are also in doubt, such as Monaco’s end-of-May race.

Canada could be replaced by a 2020 stand-in venue, Istanbul, but that would be dependent on F1 striking an agreeable financial deal to hold the race and the COVID-19 situation in Turkey, which has escalated again.

9 mins ago Formula E No Comments