Can anyone prevent F1's 'nightmare' scenario at Silverstone? - The Race
Skip to content
Formula 1

Can anyone prevent F1’s ‘nightmare’ scenario at Silverstone?

A Mercedes victory would be the dream scenario for a large proportion of the 140,000-or-so fans who sadly cannot attend the British Grand Prix, provided the Mercedes had number 44 on it.

But for others it would be quite the opposite and, despite the fact the lead Mercedes of Valtteri Bottas was only third fastest today with Lewis Hamilton two places behind, Friday practice at Silverstone suggests the worst fears of the other nine teams will be realised.

AlphaTauri team principal Franz Tost probably spoke for most of those not affiliated with the three-pointed star in the F1 paddock when he was asked about the chances of someone taking the fight to Hamilton and Mercedes ahead of the second free practice session.

“I hope that Max [Verstappen] can compete successfully against it because we need interesting races, we need fights,” said Tost.

“It would be a nightmare if Hamilton is just far away in front of the rest of the field because this is not what people want to see.

The timing screens suggested otherwise, but you can ignore the headline numbers from Silverstone’s Friday afternoon practice that put Lance Stroll’s Racing Point at the top of the pile.

We can take it as read that Mercedes should dominate, given how much the circuit now rewards high-speed corner performance.

The only real question is only how the competitive order may be set to line up behind the Mercedes – and what the optimum strategic route for the race might be and, therefore, where there is a competitive advantage to be had in the ‘best of the rest’ fight.

What we appear to be looking at is a Red Bull that has been significantly improved since Hungary but that is still a tricky, capricious beast compared to a more user-friendly Racing Point, one of which will be driven by the last-minute stand-in Nico Hulkenberg. Ferrari, as expected, appears to be adrift of both of them – certainly in terms of one-lap pace.

This was one of the hottest Silverstone days in living memory, with an ambient temperature of 34C and a track temperature at times nudging 50C. Qualifying and race day are expected to be around 10C cooler. So today’s temperatures probably flattered the hard compound, which for this weekend is the C1, but for next week’s 70th Anniversary Grand Prix at the same track will be the C2.

The heat will also probably have exaggerated the gaps between the hard, medium and soft. But for Mercedes, the medium was the best tyre and the team was not the least interested in the soft, hence its cars being third and fifth.

“Components that are on the car this weekend are a direct reaction to what we saw in the data and from the feedback we had in Hungary” :: Christian Horner

The soft (C3) heat-degrades itself into poor performance very quickly – and only Racing Point bothered doing any long runs on it. It is, however, as much as 0.9s faster than the medium over a single lap of qualifying.

It’s clear from the way each team used its tyre allocation that Mercedes intends going through Q2 on the medium and so, probably, does Max Verstappen. Giving away 0.9s would still comfortably allow the Mercedes to make Q3.

Could Red Bull give that much away in Q2? Probably. But it will mean pushing hard, which in this car can be hazardous. Alex Albon demonstrated as much, hitting the barriers hard on the exit of Stowe after the car snapped away from him mid-corner.

The winds, as is often the case around the flat expanses of the former airfield track, were gusty – and in combination with the RB16’s seemingly patchy aero performance – that played its part in an incident that damaged the left-hand-side of the car extensively and prevented the sophomore from doing any long runs.

Prior to that, Albon had been encouragingly quick, quicker than team-mate Verstappen, with the proviso that the latter hadn’t put a decent lap together before it was time to concentrate on the long runs.

The Red Bull RB16 is still a work in progress, but there are at least signs it’s getting somewhere even if the car continues to misbehave. But as team principal Christian Horner explained, the lessons of its struggles at the Hungaroring have been applied here.

“It is a reaction to Hungary, so all the data that has come off the car, the factory has been working incredibly long hours, so components that are on the car this weekend are a direct reaction to what we saw in the data and from the feedback we had in Hungary,” he said of changes for this weekend.

“And some of the philosophy at the front of the car changed over the winter and it’s given some anomalies that we need to understand.

“The team collectively has worked incredibly well to start to understand those issues and hopefully the parts we have brought here this weekend will start to address some of those issues.” 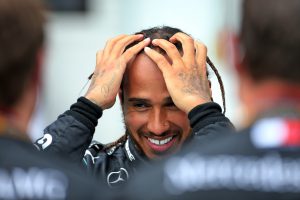 But for perspective, bear in mind that Mercedes didn’t bother doing a qualifying simulation with the fastest tyre and Bottas got to within 0.5s of Stroll’s time when using a tyre that’s 0.9s slower.

Even that implied difference of 0.4s probably understates the Mercedes’ actual competitiveness. Both Bottas and Hamilton reported, however, that the car felt somewhat unsettled by the winds. The Racing Point may just be a more driveable package in these conditions – albeit still a slower one.

“Quite a difficult day, to be honest,” was Hamilton’s summary. “It’s always windy here, it’s actually a good thing about this track that you have the wind in different directions, but it’s made it really tricky today with the car and the balance and it’s not as good as I would like.

“It’s not a disaster, but it’s definitely been a hard day of driving.”

Bottas was a little happier with the car, which is good news for a driver who will be keen to show that it’s not a one-man show at Mercedes despite Hamilton’s status as favourite.

Not unnaturally, Hulkenberg spent the practice sessions just getting up to speed with the car after eight months out of the cockpit. His qualifying simulation trailed Stroll’s by 0.636s but in the long runs, away from the ragged edge, his seven-lap average was virtually identical to his team-mate’s. This has to count as a pretty handy effort under the circumstances.

So how did those long runs compare to everyone else’s? That’s not a straightforward question to answer as Mercedes, Red Bull, Racing Point and Ferrari each conducted very different programmes. Mercedes split its long runs between the medium (Bottas) and the hard (Hamilton).

The medium was unambiguously the better of these compounds on the Mercedes, with Bottas averaging a 1m31.7s over seven laps, which was 0.7s faster than Hamilton’s similar duration run on the hards.

Racing Point did more of its long runs on the softs, suggesting it may not use the medium in Q2, and that, in turn, it may already be committing to a two-stop. Stroll and Hulkenberg were on a similar pace, with Hulkenberg actually fractionally faster. And looking at the medium runs, Stroll’s run was around seven-tenths slower than Hamilton’s.

Red Bull, with just Verstappen available for the long runs, split its running between soft and medium. This means neither of the runs were of comparable length to those of Mercedes and Racing Point, flattering the Red Bull.

Ferrari, with Sebastian Vettel’s car out of action thanks to an intercooler leak in FP1 and suffering a troubled run in the afternoon, was also relying on just one car for the crucial data. Charles Leclerc on mediums did a longer stint than the Mercedes, but that accounts only for a small proportion of the 1.8s per lap deficit his average trailed Bottas by.

Fifty-two laps at an average of 1.8s per lap slower suggests the Ferrari would be a minute-and-a-half behind by the end, which is likely on the cusp of being lapped.

With so much variation of long runs in terms of who used mediums and who used hards – and there were some who also tried the softs – it’s difficult to draw too many conclusions.

But whichever way you look at it, the nightmare scenario for everyone who isn’t Mercedes seems most likely – especially with temperatures due to drop tomorrow.