Button, competing in a Brawn GP-coloured McLaren M23 on rFactor 2, will thus have $10,000 donated to the charity of his choice as the reward for winning.

The $10k will be going to House of Ruth. @HouseOfRuth help families victimized by domestic violence. This has been on the rise since we have been in lock down 🙏🏽 https://t.co/4wjKcEFOrG

Making his second appearance in the Legends Trophy, Button took pole position in the single-lap qualifying by half a second over his nearest rival, World Touring Car legend Andy Priaulx. 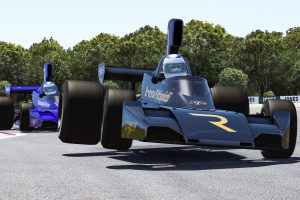 He saw off Priaulx at the start and soon eked out an advantage of more than a second, going on to control the rest of the five-lap race at Sebring.

Priaulx, for his part, soon came under pressure from Juan Pablo Montoya, who had been sixth entering the first corner but moved up to third courtesy of an apparent melee involving usual Legends Trophy frontrunners Emanuele Pirro, Dario Franchitti and Jan Magnussen.

💥 Ouch! Big crash at the start of the #LegendsTrophy in
The Race All-Star Series – Fully Charged by @ROKiTPhonesUK. @JensonButton leads
💻 Watch at: https://t.co/WdVqh7S2NG
📺 On TV in 🇺🇸 on @ESPN 2
🖥 Online in 🇪🇺 on @Eurosport #TheRaceMustGoOn || #LegendsTrophy pic.twitter.com/ZVikwQXLdZ

Montoya got past Priaulx on the opening lap, but couldn’t make inroads on Buttons’ lead from there, settling for a second-place finish.

Bryan Herta took fourth place, ahead of David Brabham and Formula 1 1997 champion Jacques Villeneuve, using a controller as opposed to a racing wheel.

Villeneuve had lined up last on the 20-car grid but was the beneficiary of opening-lap incidents, including a start pile-up caused by Brabham being turned around.

And though Brabham would recover to overtake him, late-race dramas for Darren Turner and Tony Kanaan promoted Villeneuve to sixth.