Brawn hopes F1 title not decided on ‘crashes and penalties’

Formula 1 sporting boss Ross Brawn hopes Lewis Hamilton and Max Verstappen will avoid a repeat of their British Grand Prix collision because “nobody wants the championship decided on crashes and penalties”.

Verstappen was pitched into the barriers at high speed on the opening lap at Silverstone after a failed passing attempt from Hamilton at Copse.

Seven-time world champion Hamilton went on to win the race despite being given a 10-second time penalty for causing a collision, while Verstappen was sent to hospital for precautionary checks.

Brawn said F1 enjoyed a “fabulous weekend” at Silverstone, with “a dramatic start and a dramatic finish” as Hamilton hunted down Ferrari’s Charles Leclerc to win in front of the first full crowd since the COVID-19 pandemic began last year.

But he expressed his regret for what happened on the opening lap.

“We saw the title protagonists go wheel-to-wheel once again, but this time it ended in a collision, which ended Max’s race,” Brawn said in his post-race debrief.

“It was a massive relief to see him climb out of the car and walk away before he went to hospital for precautionary checks. 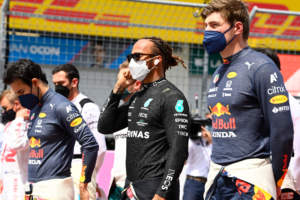 “As is always the case in these matters, there will be a wide range of opinions on the rights and wrongs.

“What is clear is that we were robbed of a thrilling battle and nobody wants the championship decided on crashes and penalties, and, as in this case, there is a serious risk to either driver.

“It is something both drivers will reflect on. I hope we can avoid those incidents in the future because I think we were denied a fantastic battle yesterday.

“They raced each other hard for half a lap, and it was thrilling. Imagine how dramatic the grand prix would have been if that had been the race.”

Hamilton and Verstappen have raced wheel-to-wheel several times this season and avoided major contact but a serious collision has felt inevitable and even though the Red Bull now has a small but decisive performance advantage, it seems likely there will be further potential for on-track incidents before the end of the season.

Hamilton’s aggressive passing attempt at Silverstone was rooted in knowing the Red Bull was quicker, and motivated by the knowledge he needed to get ahead as quickly as possibly having already failed to do so twice on the opening lap already.

But he felt after the grand prix that his successful move on Charles Leclerc to win the race, at the same corner, proved the attempted pass on Verstappen could have come off cleanly.

Though Hamilton’s own line through the corner was crucially different than it was against Verstappen, he remained adamant that Verstappen was not leaving enough room the first time.

He said Verstappen is “very, very aggressive” and claimed he’d already been forced to give him space earlier in their opening-lap fight.

But Hamilton shared the same sentiment as Brawn in admitting they needed to find a “balance” in the future and said he is “open” to talking to Verstappen between now and the next race in Hungary, although said he doesn’t “have any issues and I don’t know really know what we’d say”.

Glad I’m ok. Very disappointed with being taken out like this. The penalty given does not help us and doesn’t do justice to the dangerous move Lewis made on track. Watching the celebrations while still in hospital is disrespectful and unsportsmanlike behavior but we move on pic.twitter.com/iCrgyYWYkm

“It’s game on,” Hamilton said. “We’ll keep on attacking. There needs to be respect on the track.

“If not this will happen more often, I guess. I’ll try my hardest to stay as clean as possible.”